H.R. 1 Is for the Democrats—Not the People. 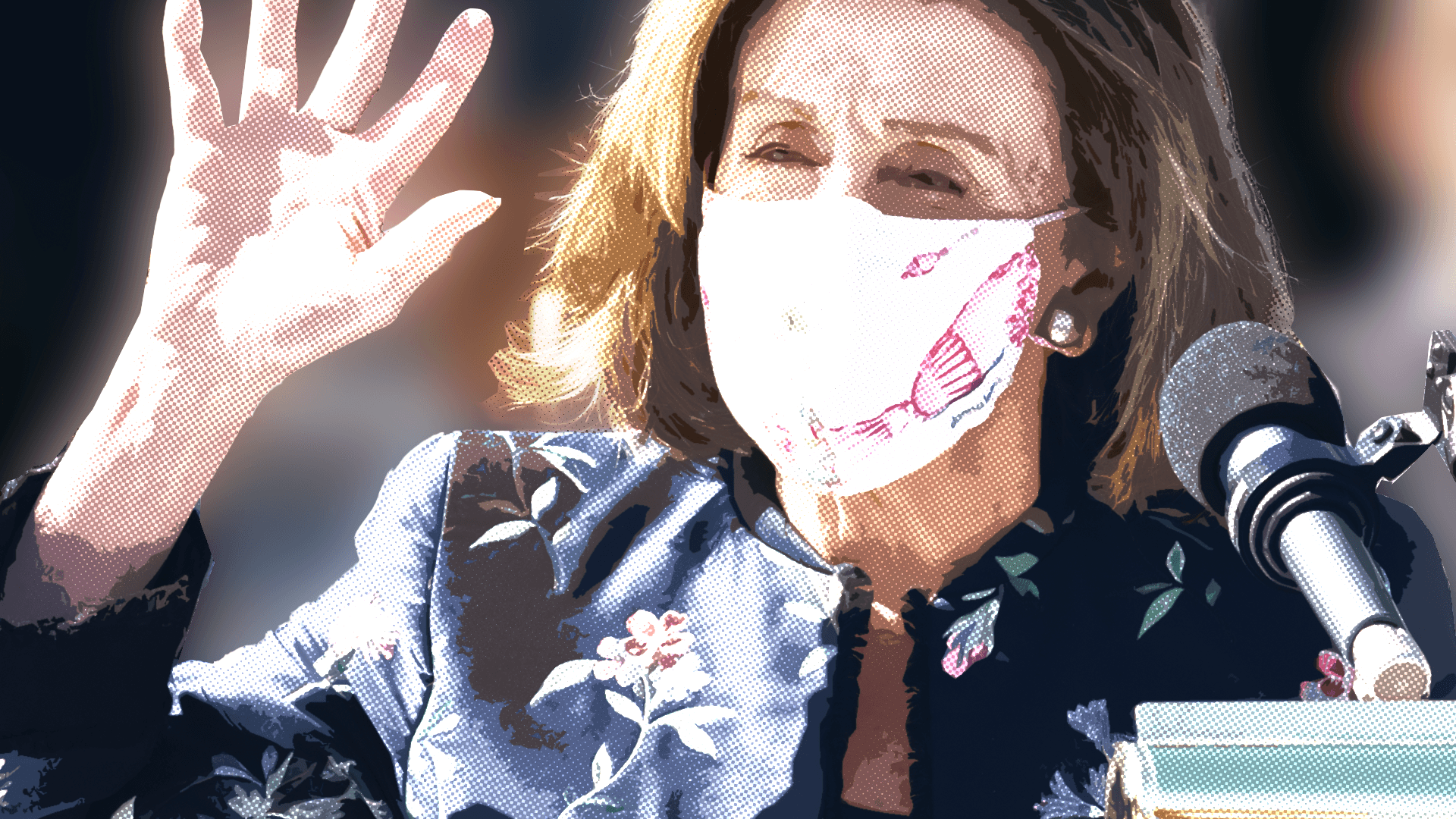 We still don’t know how much voter fraud occurred during the 2020 national elections, or how much it influenced the results. Whether or not the procedure was as sinister and odious as President Donald Trump and many of his surrogates said it was, there was evidence of enough smoke at so many voting centers that it is safe to say that there was some kind of fire.

At this point, it is unlikely that we’ll ever know, but if the Democrats have their way, election fraud won’t just be an aberration or even a scandal—it will be a way of life in America. At the beginning of March, when the House passed H.R. 1 (also known as the “For The People Act”), it sent a bill to the Senate that would codify voter fraud and mischief if it becomes law. H.R. 1 could be the most corrosive and degenerative legislation ever designed by an American lawmaker.

"They want to change the system to benefit themselves and they want to have, instead of a referee, they want the FEC to be a prosecutor," Sen. Minority Leader Mitch McConnell (R-KY) said about the bill while a guest on the conservative podcast “Ruthless.” "So this is not about anything other than trying to help the Democrats win elections in perpetuity," he added.

Democrats, of course, used to be the party that prevented people from voting. The South was solidly Democratic for a century, and it remained so because election officials made it difficult for black people to vote, implementing poll taxes and tests to keep black Americans from voting. Now, they are encouraging everyone to vote—several times if possible. There is so much that’s wrong with the legislation, least of which is its name, suggesting as it does that the American electorate, writ large, is the winner. Instead, H.R. 1 should be more accurately named “For The Democratic Party.”

If one were to pinpoint the two most dangerous elements of this 800-page bill, it would be that it seeks to make voting anonymous, unaccountable, and ultimately, fraudulent.

These laws are written to enhance the integrity of elections by making voter fraud more difficult: voters must prove they are who they say they are.

To begin with, the bill undermines state laws that demand people who vote need to have identification. Georgia just passed such a law in March, and 36 other states currently have such legislation in place. These laws are written to enhance the integrity of elections by making voter fraud more difficult: voters must prove they are who they say they are.

Under H.R. 1, all you would need to vote is a name—and that name can be anything you want it to be because you don’t need to prove it. Just sign a form, and you’re on your way. The potential problems with this system should be obvious to anyone, and they probably are to Democratic lawmakers too. That’s why they like this system. Just imagine how often a person could vote, simply going to any given number of election centers and using any given number of names.

Why would we want to eliminate the simple need to verify someone’s identification? Voting is not like buying a loaf of bread. Is it somehow racist to suggest that people need to prove who they are? This part of the law would be subject to so much abuse that it seems like the people who crafted it had it planned that way.

And what about absentee ballots? The bill allows for absentee ballots to be handled or delivered by third-party organizations. So instead of this process being conducted via the relatively non-partisan hands of a bureaucrat, the local Democratic Party machine, or any group dedicated to a progressive cause, could volunteer to distribute and/or pick up the absentee ballots. Now, does anyone see the potential for abuse in this process? How do we know that votes aren’t being bought and sold or that these third-parties aren’t filling out the ballots on their own initiative to advance their own political cause?

This is called ballot harvesting, and it is a fraudulent process already at work in some states, including California where there is evidence that this sort of corruption secured massive majorities for Democrats in the state elections.

Allowing anyone to vote by absentee ballot essentially means everyone can vote by mail, and in the language of the bill, the two terms are more or less synonymous. Even more alarmingly, none of these absentee/mail-in ballots would have to be verified by signature or notarization. “A State may not require an individual to provide any form of identification as a condition of obtaining an absentee ballot, except that nothing in this paragraph may be construed to prevent a State from requiring a signature of the individual or similar affirmation as a condition of obtaining an absentee ballot,” the bill reads.

Of all the irregularities in the last election, it seemed most concerning that so many people voted by mail, and that there was the potential for a suitcase of votes to be conveniently “discovered” by local political bosses. Again, this is what ballot harvesting is all about: coercing or buying votes out of people, and when that fails, outright fabricating ballots. H.R. 1 would order election officials in all states to mail absentee ballots to everyone in the state, creating the real possibility that some of the forms will be bought, or of people voting both by mail and in person.

H.R. 1 also advocates online voter registration as a means of making that registration automatic—like on election day. But does anyone see the potential for voter fraud in having anywhere from hundreds of thousands to millions of people all registering online on one day? How easy would it be for a hacker—especially one with a political agenda—to enter a database of deceased voters that could then be transferred to people who have already voted once?

It is easier to hack into a voter database than it is a corporate one; the former is rarely protected with the same vigor as the latter. A business has its digital security breached, and it could be out of business. If election officials have their database hacked, it’s embarrassing, sure, but nobody loses any money. Anyone who has ever worked an election knows that the governing organization is sometimes ad hoc, haphazard, and always temporary.

It’s no wonder then that Sen. Mike Lee (R-UT) described the bill as originating in hell. "I think I disagree with every single word in H.R. 1, including the words ‘but,’ ‘and,’ and ‘the.’ Everything about this bill is rotten to the core. This is a bill as if written in hell by the devil himself. This takes all sorts of decisions that the federal government really has no business making. It takes them away from the states, makes them right here in Washington D.C. by Congress.”

Lee noted that the bill appears to be all about keeping the Democratic Party in power. “Apparently in an effort to ensure an institutionally, revolutionary-democratic party of sorts. One that can remain in power for many decades to come. It does this by taking away these decisions. Elections in America have always been conducted at the state and local levels…”

H.R. 1 also affects campaign finance policy, which is always a point of contention among Americans, and the bill takes a firm stance on that debate. Even if you don’t feel compelled to contribute to your candidate’s political war chest, H.R. 1 demands that you fund someone else’s campaign—through your taxes. For every dollar a candidate receives from a private donor, he or she will receive six dollars from the federal government or taxpayers. This is a hugely undemocratic concept.

If implemented, the bill would also empower the IRS to assess whether non-profit organizations should have tax-exempt status. That assessment would be based on what kind of political views the group promotes, and you can just bet that the IRS wouldn’t look favorably at conservative organizations that might not reflect the social values and political objectives of Washington’s Democratic elites who control the executive and legislative branches of government right now. That elite is not going to give up power easily, especially when they’re so close to snatching the judiciary, too, if President Biden tries to pack the Supreme Court. With legislation like this, we are living in an age where literally anything is possible.

As if to signal that hostile takeover, the bill also includes a commitment to make the District of Columbia into a state...

This kind of political enforcement is right out of the playbook of former President Barack Obama when the IRS targeted Tea Party groups and removed their tax-exempt status. This bill would not only normalize this type of behavior, it would codify it. The federal government bureaucracy has proven itself to be remarkably obstinate in advancing conservative policies and predictably acquiescent in embracing liberal ones, so who do you think the IRS is going to target when it doesn’t even need to be directed to do so but is empowered by H.R. 1?

This is all about a massive power grab with not only the Democratic Party ensuring that it wins elections, but that the federal government controls those elections and sets uniform standards of corruption. As if to signal that hostile takeover, the bill also includes a commitment to make the District of Columbia into a state, though it’s not quite clear how that is going to be achieved since that could require a Constitutional amendment.

The bill’s success is by no means a certainty, and there is tremendous pushback from the Republicans and 20 state attorneys general proclaiming the bill to be unconstitutional, so there is some reason to hope for some political counterattack. Whether or not it creeps by in the Senate depends on whether there is any courage on the Democratic side to fight for the integrity of the political system. We all knew what was coming if the Democrats captured the presidency and the Senate. They are attempting a bloodless revolution intent on the transformation of America in a matter of months. The executive orders are taking their toll on freedom, but legislation like H.R. 1 would only increase that devastation.

Now one could argue that all that is required to level the playing field is for the Republicans to play the political game with the same ruthless mendacity and gleeful corruption as the Democrats. But that would reduce the American electoral system to a gang war where the side with the most cunning and vicious gangsters rule the streets. Is that what the great Republic has become?

The fight against HR. 1 is ultimately not just about preventing the Democrats from making America into a one-party state; it is about preserving democratic integrity and good governance.

It is about truly delivering something for the people—which is something H.R. 1 utterly fails to do.