Biden/Harris Is No Dream Team. 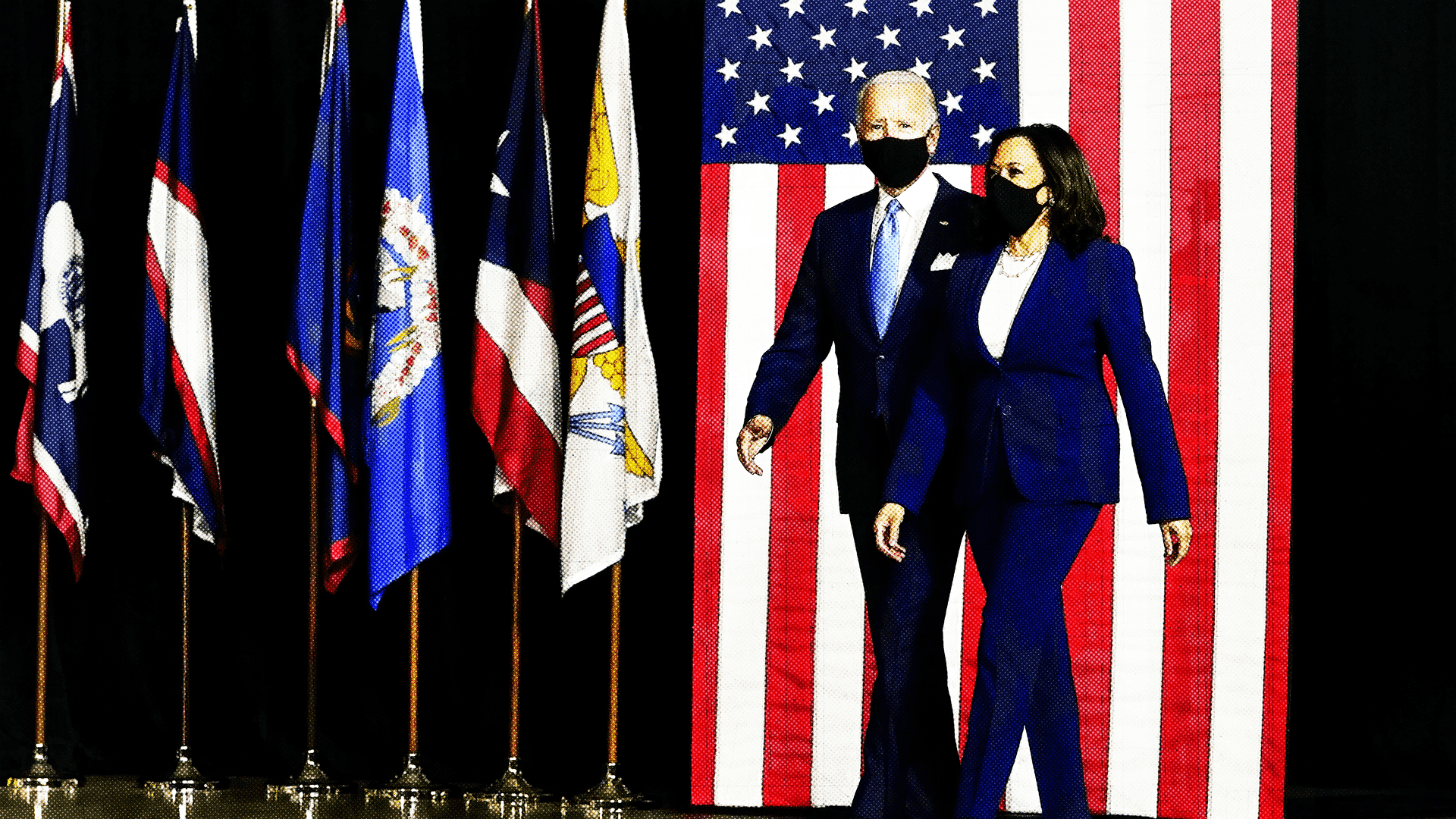 Presumptive Democratic presidential nominee Joe Biden has announced his choice of running mate this week. Of course, it’s not as though Biden’s choice was a complete surprise; he had already indicated that he would choose his potential vice president based on their race and gender, and it would most likely be a black woman.

Biden is either a highly forgiving man or just plain forgetful. Or perhaps he enjoys the pain of politics.

The Democratic Vice Presidential Candidate for 2020 will be Sen. Kamala Harris (D-CA). (That’s “KAMMA-LA!” as we learned from an August 12th exchange between Fox News host Tucker Carlson and former Bill Clinton advisor Richard Goodstein, who made a point of telling Carlson that he was mispronouncing Harris’ first name. Carlson seemed a little offset by the remark, but, of course, good Democrats know how to promote a questionable product by diverting our attention from quality control issues.)

Not long ago, Harris had desperately wanted the presidential nomination herself, of course. Although her campaign began with frenzied fanfare, it is best remembered for the Senator’s acrimonious exchanges with Biden over race. Millions of people watched the Democratic presidential debates—either because they had to, as journalists; loved to, as political addicts; or chose to because they were shut-ins. For all of the above, it was agonizing to see the supposed crème de la crème of the Democratic Party prostrate themselves before the far left forces that were pushing the party of Jefferson and Jackson over the precipice—watching political veterans like Biden become toothless acolytes of Rep. Alexandria Ocasio-Cortez (D-NY) and the rest of the Marxist squad.

But there were some entertaining moments, such as the grinding exchange between none other than Biden and Harris, when the Senator left a beaten and bloodied Biden on the mat after resurrecting an issue from the 1970s that most of the kids covering politics today had never even heard of: school bussing.

“I will say also that in this campaign, we’ve also heard and I’m going to now direct this at Vice President Biden, I do not believe you are a racist,” Harris told Biden, in much the same manner as she might say, “I don’t think you’ve lost any more of your mental acuity over the past decade.” She went on:

“And I agree with you when you commit yourself to the importance of finding common ground, but I also believe and it is personal and it was actually hurtful to hear you talk about the reputations of two United States senators who built their reputation and career on the segregation of race in this country and it was not only that but you also worked with them to oppose bussing. And you know there was a little girl in California who was a part of the second class to integrate her public schools and she was bussed to school every day. And that little girl was me.”

Harris had such a good time with the feeding frenzy that, within hours, her campaign website had t-shirts available for sale that announced: “That Little Girl Was Me.”

Well, Biden’s vice-presidential pick is also her. Biden is either a highly forgiving man or just plain forgetful. Or perhaps he enjoys the pain of politics. Whatever it is, and whether Biden selected Harris himself or his party handlers did it for him, Harris is sure to not only highlight but reinforce all the reasons Americans should not vote for Joe Biden—and risk setting up Harris to step into the job.

Ironically, Joe Biden’s civil rights history is a veritable political minefield, one that includes gaffes and remarks that would have sunk the career of a less resilient and less Democratic politician. Sill, his opposition to school bussing is arguably not one of these. Bussing kids across town created a lot of annoyance and resentment; plenty of parents objected to their children enduring three hours of commuting every day for perfectly legitimate reasons.

Once upon a time, Joe Biden was none too concerned about compensating anyone for segregation because he called it a source of “black pride.”

But there is much in Biden’s record on race that is worth examining, especially since these days, he pretends to be the only logical electoral choice for black people (“You ain’t black” if you vote for Trump). Once upon a time, Joe Biden was none too concerned about compensating anyone for segregation because he called it a source of “black pride.”

You wouldn’t know that now, of course, given how frequently he demands immediate action to end the nefarious influence of “institutional racism,” (that can even be found in a bottle of beer) and promises to take seriously the demands that every black American be reimbursed for centuries of slavery, segregation, and racism with “reparations” that could take any form but most usually equate to a massive cash settlement. And of course, he’s never far off from calling President Trump a racist—”the first racist President,” in fact.

Despite his recent “awokening,” Biden’s racist blooper reel is unending. In an August 27th, 2006 interview with Fox News’ Chris Wallace, back when he was (yet again) seeking the Democratic presidential nomination, Biden actually boasted that he came from a slave state. When asked if he’s the least bit worried about being perceived as a “northeastern liberal” in the race: “You don't know my state. My state was a slave state. My state is a border state. My state is the eighth-largest black population in the country. My state is anything from a northeast, liberal state."

Long before he had the 2020 nomination wrapped up, Biden was bragging about how well he worked with Democratic segregationist senators who populated the chamber when he first arrived in the early 1970s. That earned him some heavy criticism from Sen. Cory Booker and Rep. Ocasio-Cortez, who took Biden to task for recalling the civility of his southern colleagues while casually dismissing their segregationist views.

Back in 2008, Biden could not resist joking about Barack Obama, who made him his running mate that year, as he quipped that he was amazed at how a black man like Obama could be so “articulate and bright and clean and a nice-looking guy.”

And it’s not just that Kamala Harris on the campaign trail will be a constant reminder of Biden’s recurring racial gaffes. She could also be a reminder of Biden’s penchant for inappropriately touching women throughout the years. After a raft of women came forward in 2019 to tell stories of Joe’s allegedly roaming hands, Harris interjected, “I believe those women.”

There is a clear and apparent disconnect between Harris’s words and her supposed belief in these women’s stories. If she genuinely believes these women, then how can she work with and represent a man who has come to embody the creepy politician? The Senator was so obsessed with the ridiculous tales of Supreme Court Justice Brett Kavanaugh’s alleged sexual misconduct that she vowed to impeach him. Would she be willing to bury the hatchet with him if it was politically expedient to do so?

Of course not—she’s a Democrat.

Of course, there have been a myriad of presidential teams-ups in the past that have involved people who really didn’t like each other, or who had actively campaigned against each other. Senate Majority Leader Lyndon Johnson was a fierce rival of Sen. John F. Kennedy in 1960; Johnson thought he was much more qualified for the presidency, but accepted Kennedy’s offer to run as vice president nonetheless. George H.W. Bush agreed to be Ronald Reagan’s running mate after he had accused the Gipper of promoting “voodoo economics.”

The real reason she is on Biden’s ticket, however, is that she is both black and female and Biden knows that he must win big in both categories in order to defeat President Donald Trump in November.

Of course, in both of these instances, the pairing made sense; New Englander Kennedy needed a Southerner to keep Dixie voting Democrat. Reagan, who was seen as a potentially dangerous conservative in the Barry Goldwater mold, likely benefited from having the establishment-friendly Bush on the ticket.

But rarely, if ever, has a presidential candidate selected a potential vice president who so adeptly reminds the public of his political weaknesses as Harris does of Biden. If there is any logic to this decision, it can only be in the realization that Biden has chosen another politician who is exactly like him—one who will parrot any talking point and lip-synch any line that is politically expedient—or take a knee in with an African scarf to demonstrate obeisance to Black Lives Matter. In that regard, Biden has indeed found his political soul mate.

What is the value-add with Harris? Certainly, she offers an image of a former prosecutor who was tough on crime—but not as tough as Biden used to be when he co-authored the “three strikes” crime bill. As both politicians have retreated into the fuzzy world of “reimagining the justice system,” Harris's value feels marginal in this arena. And sure, she does offer relative youth—and with Biden struggling and failing to demonstrate that his age is not an impediment to the presidency, Harris appears positively vital.

The real reason she is on Biden’s ticket, however, is that she is both black and female and Biden knows that he must win big in both categories in order to defeat President Donald Trump in November. Arguably, Joe Biden’s hold on the black vote is particularly tenuous, not only because he has a proven track record of recklessly dismissing black voters on the campaign train, but because President Trump has made real inroads into this constituency. In his first term, Trump’s policies resulted in (pre-coronavirus) economy that provided record numbers of jobs among black Americans, and established law and order reforms that many black families support because they don’t want to live in communities ravaged by gang violence unjust imprisonment. Sen. Tim Scott (R-SC) predicted that Trump could capture as much as 15% of the black vote—a catastrophic outcome for Biden, one that the decision to cast Harris as his running mate seems to try and get ahead of.

With all of his baggage and the economic legacy from the Obama years, Biden cannot run well against Trump. Kamala Harris provides at least a crutch of stability. Although, given Biden’s very instability, and the distinct possibility that he might not serve even one full time as President, there is cause for pause among Democratic voters who may be casting ballots for an eventual Harris presidency.