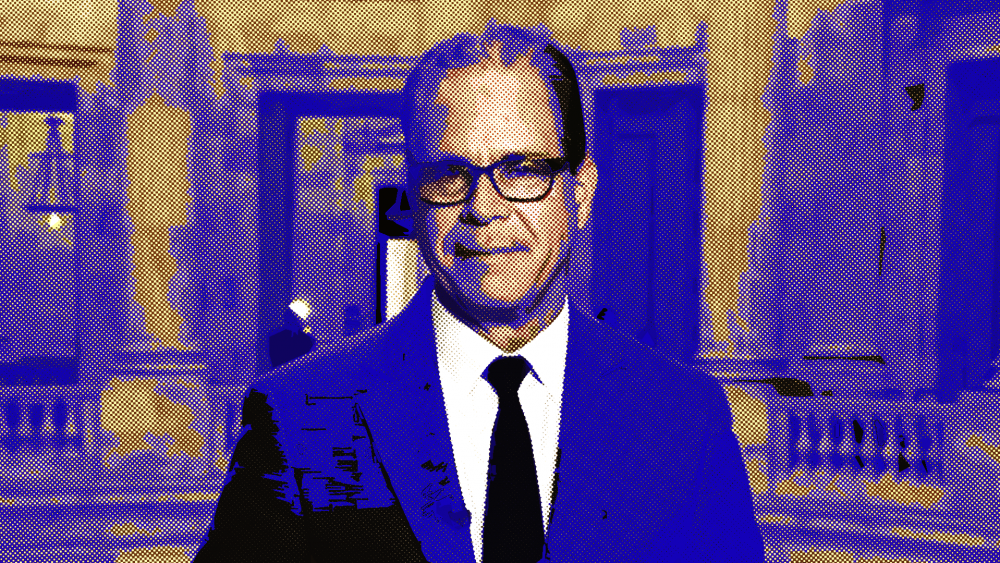 Sen. Mike Braun (R-IN) has become a poster boy for conservative failure—embodying exactly what seems to be wrong with the Republican Party at this crucial juncture in American history. Braun’s Reforming Qualified Immunity Act is a full-frontal assault on peace officers across the nation, who are currently granted immunity from civil lawsuits in most circumstances.

Braun recently faced off about the bill with Fox News host Tucker Carlson; Carlson didn’t mince his words, but he did mince Braun into metaphorical pieces.

Carlson (unlike his network colleague and closest competition for the highest cable news ratings, Sean Hannity) has offered a take-no-prisoners and uncompromising critique of our entire political landscape during the current crisis that began with peaceful protests over the brutal and completely senseless death of black man George Floyd after his arrest by Minneapolis police. These protests have since degenerated into a spree of looting, rioting, and vandalism and have become a historical and ideological purge of America.

While Carlson has, to the delight of conservatives, rightly eviscerated the Democrats for their efforts to politically profit from the chaos by fantasizing about a society bereft of police forces, he has not spared the Republicans, either, for often getting lost in the ideological fog, seemingly not knowing what to say or whom to support.

Carlson’s sparring with Braun was not an isolated incident of a conservative news host giving a Republican leader both barrels. The dialogue illustrated exactly how weak those within the GOP have become and how infuriated Carlson and, most assuredly, a multitude of conservative viewers are becoming with their pusillanimous advocacy.

Braun’s Reforming Qualified Immunity Act will effectively remove the protection that peace officers currently have against civil lawsuits and arguably provide the impetus to Black Lives Matter (BLM) and other radical groups to litigate at will. Police officers have been granted this immunity to avoid nuisance lawsuits that could arise every time a cop makes an arrest, and the culprit claims that it was all because of the clothes he was wearing or the length of his hair—or his race. This is exactly the point that BLM underscores in every protest and in every crudely painted sign: that the police always have an ulterior motive for arresting and then supposedly killing black people: they’re racist—so sue the scoundrels!

Braun and his advocates are acting in much the same way as conservative parties in other countries (especially Canada) have neutered their policies so as to offer no real opposition or alternative to the ruling liberal elites.

In an earlier show, which occurred just after Braun released his bill but did not include the senator himself, Carlson threw the immunity concept back at Braun: “So how about this, how about Mike Braun gives up his immunity first?” he asked. “That seems only fair, so the next time Mike Braun makes a mistake, and he is a U.S. senator so it likely won’t be long, the trial bar can land on him and take his house away. Mike Braun would make for a very good target for left-wing public interest lawyers. They would be excited.”

Indeed, in the face of a nation-wide crisis, the Republicans have come to resemble deer in the headlights. While all Republicans did not march in the streets to support BLM as Sen. Mitt Romney (R-UT) did — they did little to criticize the organization. Even after the peaceful protests had become violent looting, Defense Secretary Mark Esper mutinied against his own administration and didn’t agree with using federal troops to enforce law and order in America. And, as Carlson has pointed out, Republicans “ran away” when the riots erupted and often appeared to be hoping this confounded mess just evaporates in the summer heat and sensibilities will return to normal in the cool of the fall election. Trump himself repeatedly said he would intervene in Seattle’s anarchist zone of “CHAZ/CHOP” but never did.

Into this quagmire stumbled Braun, who has become the face of Republican appeasement—that disease the Winston Churchill described after the Munich Pact of 1938, where the “German dictator, instead of snatching the victuals from the table, has been content to have them served to him course by course.”

Indeed, Braun appears to have gone further than Hitler’s appeasers in this instance, and is enthusiastically advocating for total surrender. His willingness to not only negotiate with Black Lives Matter but to capitulate to its demands is not only a recipe for national disaster, it is a blueprint to make the Republican Party irrelevant. Braun and his advocates are acting in much the same way as conservative parties in other countries (especially Canada) have neutered their policies so as to offer no real opposition or alternative to the ruling liberal elites.

Just listen to Braun’s responses to Carlson’s argument that the senator is caving to BLM and leaving police officers hanging out to dry: “If we are not in the discussion, we are going to be on the sidelines like we are on so many issues as conservatives because we failed to engage and [the Democrats] run circles around us in the end.”

You see? Evidently, if we don’t participate in the madness that the Democrats are concocting, then they will end up running the asylum!

Braun says it again, by suggesting, “If we don’t get better at it for all of us on main street, Democrats are going to spin it, Chuck Schumer has already decided he can make a of this in the election and we will end up on the short side of it again.”

“If we don’t get better at it for all of us on main street, Democrats are going to spin it, Chuck Schumer has already decided he can make a of this in the election and we will end up on the short side of it again.”

Carlson was rightly amazed that a Republican senator, who is part of a GOP majority, would be taking his marching orders from Minority Leader Chuck Schumer (D-NY). “Who controls the Senate?” Carlson asks. “I thought Republicans controlled the Senate. So you’re taking your cues from Chuck Schumer saying he might criticize me and therefore I have to pass a law that makes it easier?”

The Fox News host pressed Braun further, asking who exactly was rushing to support his bill, “So what law enforcement groups are endorsing your bill?”

The senator admitted that none have endorsed it, but that someone (somewhere) had supposedly indicated it was “a good place to work from.”

“Why aren’t they endorsing it?” Carson asked. “You’ve cited them twice as supporters of this idea but they’re not endorsing your bill so they don’t actually support it so why are you bringing it up as evidence that it’s a good idea?”

Braun simply repeats himself in response: “They think it’s a better idea to be in the discussion then to be outside of it.” (Offering no clarity as to who “they” are).

And he didn’t end there. He then went on to threaten Republicans' electoral disaster if they don’t pack in their principles and get with the Democratic parade. “If we are not in the discussion, we are going to be on the sidelines like we are on so many issues as conservatives because we failed to engage and they run circles around us in the end.”

Throughout the interview, Carlson provided Braun with a substantial length of rope, and the RINO senator graciously acceded to stringing it around his neck and hanging himself with words that felt crafted by political opponents. Braun kept insisting this was about a “discussion,” but if we let enough of these politicians lead that discussion, we will be left with nothing but bipartisan agreement—something that is fine when the issue is truly in the national interest, such as national defense, but that ultimately leads to a one party state when everybody is forced to think alike on all issues.

Braun did not win his Senate seat in a landslide, and it would be logical to assume that he feels looking “moderate” might improve his chances with liberal voters and increase his margin of victory the next time he stands for office. But that is a mistake because liberals don’t need to vote for Republicans who are Democratic wannabes. The less Braun appears to be a Republican, the less those voters are inclined to support him—or indeed to vote at all. Braun will ultimately realize the error of his ways but he cannot be allowed to pull more Republican lawmakers over the political cliff with him. America does not need two Democratic parties.