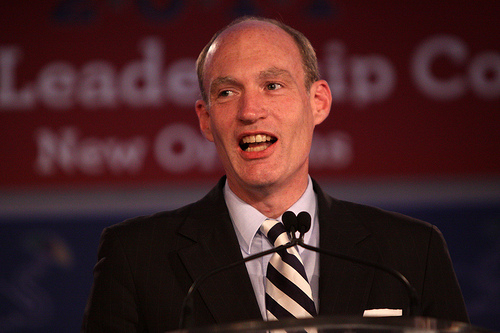 MACKINAC ISLAND, MICH.—“The hardest 15 minutes of my life” is how Rep. Thad McCotter (R.-Mich.) joked about his brief bid for the Republican presidential nomination on Saturday morning.  Addressing the breakfast at the Mackinac Republican Leadership Conference here at the Grand Hotel, five-termer McCotter made it clear his national campaign had ended after he failed to get into any of the nationally televised debates of presidential hopefuls and that he would now seek reelection to Congress.

But all signs from the GOPers gathered here are that this is not going to be as easy for him as he thought.  Although McCotter’s 11th District remains a Republican-leaning district, it is no longer dominated by the congressman’s base in Wayne County (Detroit), where he once served as GOP chairman.  Nearly 60% of the new 11th is composed of Oakland County turf, and McCotter will face at least one and perhaps two fellow conservatives as opponents in the primary next August.

“I’m in it,” State Sen. Mike Kowall told HUMAN EVENTS later on Saturday, “and I don’t take things like [running for Congress] lightly.”  The Oakland County lawmaker (whose wife, Eileen, serves as state representative), has already been endorsed by fellow Sen. Jim Marleau of Oakland County.  Kowall explained that he did not “feel I am running against Thad McCotter” but that the congressman’s run for President clearly created an opening for others to get in the race, and he is doing it.

Although both McCotter and Kowall are considered strong conservatives on economic and cultural issues, the incumbent has had a problem with some of his votes on labor-related matters—notably supporting the Big Labor-loved “card check” bill that would end the secret ballot in union elections, and the Davis-Bacon Act, which requires prevailing wages be paid on public work projects.  Both have been major targets of the Republican Party.  Clearly aware of the controversy his Davis-Bacon stand evokes within the GOP, McCotter remained silent during a forum of the Republican House members at the conference Saturday when lawmakers were asked about Davis-Bacon and fellow Rep.Tim Walberg denounced the law as “the No. 1 job killer in America.”

“I’m for the secret ballot in union elections,” Kowall told us, “and the prevailing wage inssue needs to be addressed, with union contractors and nonunion contractors putting all their cards on the table.”

Another possible candidate in the 11th from Oakland County is Rocky Raczkowski, former state legislator and near-winner in a tight 2010 race against Democratic Rep. Gary Peters.

With wife Amalia, Raczkowski told HUMAN EVENTS they were considering a move from the 9th to nearby Bloomfield Hills in the 11th District.   As for a race for Congress against McCotter and Kowall, he said, “I have no comment one way or another, and I am not interested in running for office simply for the sake of running for office.”

But sources close to the former lawmaker and 24-year U.S. Army veteran told HUMAN EVENTS he is making inquiries about a race and “if Rocky runs, it will be in the 11th.”

Conservatives have always liked McCotter for his knowledge of history, speaking style and love of rock music.  But he clearly has a problem with some votes, and signs are strong this will translate into a political problem in his own party in 2012.

Reconsider Hiding Out in Grad School