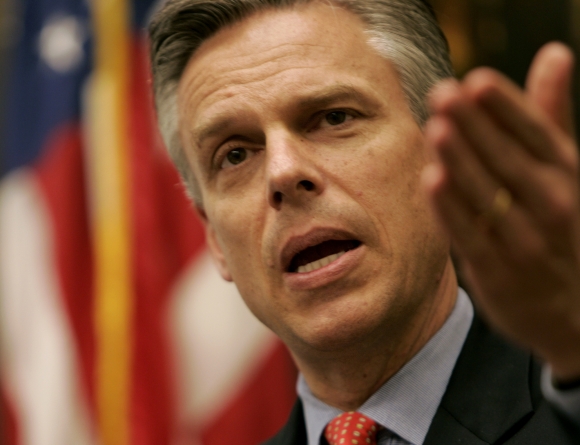 Paul’s video attacks Perry’s past as a Democrat and uses Ronald Reagan images and references to not only link Paul to Reagan but to separate Perry from Reagan.

In the video, the narrator says that Paul was “one of only for congressman to support Ronald Reagan’s campaign for President.”

The commercial then switches gears and talks about Perry’s connection to Al Gore, for whom Perry, according to the video, was a “cheerleader” when he led Gore’s presidential campaign in Texas in 1988.   A year later, Perry switched parties and became a Republican before running for a seat on the state’s agriculture commission.

The implicit message in Paul’s commercial is that Perry was campaigning against Reagan’s so-called third term in 1988.

What isn’t mentioned in the commercial is how Paul ran for President in 1988, against both Bush and Gore on a libertarian platform.

Here is the Paul commercial:

Huntsman, on the other hand, released a commercial called “#1 vs. #47,” which is optimistic and upbeat in tone when describing his record in Utah when Utah led the nation in job creation, while being downbeat when criticizing Massachusetts’s record of of being 47th in job creation.

More significantly, Huntsman, who needs to defeat Romney in the first-in-the-nation primary state of New Hampshire if he is to get any traction in the race, released the ad on the day Romney unveiled his jobs plan in a speech in Nevada.  Romney’s plan is not as bold as Huntsman’s, which got plaudits from fiscal conservatives and publications such as the Wall Street Journal, but Romney’s plan got praises from conservative groups such as The Club For Growth.

The ad uses an old beat-up baseball glove (or, rather, “mitt”) to symbolize Romney’s dour record on job creation when he led Massachusetts.  The ad concludes by saying, “One man’s record is sadly similar to Obama’s,” which clearly links Romney’s record of poor job creation with that of the President.

Huntsman has already unveiled his economic and jobs plan, and he is the first to do so before Obama’s speech on Thursday.  This 12-page plan was lauded by the Wall Street Journal, which described it as “better than anything so far from the GOP field.”

Huntsman’s video can be seen here:

How Obama Protects the Teamsters