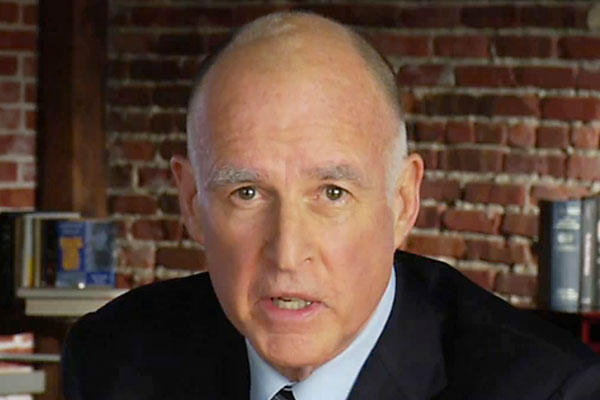 The fall of California and the breakdown of both its government and economy have been well-documented over time.  The failed policies continue, and these days California Gov. Jerry Brown is using strange insults to get his high-tax agenda through the state legislature.

In an appearance he made in Las Vegas on Tuesday, Brown stated that he believes the Republican Party’s resistance to infrastructure projects and taxes is ridiculous.

Brown said, “It’s dangerous, it’s shortsighted.  But it’s a product of this notion that taxes are like some kind of a sexually transmitted disease, and government is all the problem.”

Earning a reputation for making strange off-the-cuff statements and coming up with bizarre ideas, Brown has been given the moniker of “Jerry Moonbeam”.

This was mostly in response to his idea that California should create a space academy along the line of Starfleet Academy from the television show “Star Trek.”

The plan didn’t pan out.

Upon being elected to this most recent stint as governor, Brown made a strange, awkward and rambling victory speech.  At one point he said, “I still carry this missionary zeal to transform the world.”

After Ronald Reagan left the California governor’s office in the 1970s, Brown was elected and served from 1975 until 1983.  After that, he continued to hold government offices.

He served as the mayor of Oakland for nearly a decade, during which time he raised taxes and created a scheme to combat crime by using a crime database and a larger police force.  The result:  The total number of murders in the city nearly doubled from when he entered office, and total tax revenues actually fell.

The city of Oakland has become so bad that the police will literally not show up for a crime reported except in an extreme emergency.  There is literally a list of 44 crimes that the Oakland police will not respond to, including burglary, theft and extortion.

On top of this are Oakland’s highly restrictive gun laws that make it difficult for law-abiding citizens to defend themselves.

Oakland has degenerated into a place with widespread poverty and crime that plague law-abiding citizens who create most of the wealth and pay nearly all of the taxes.

Deeply progressive policies combined with the massive problems of illegal immigration came to a head in the mid-1990s, which decimated California’s Republican Party.  The comparisons with Texas abound and generally highlight the difference between a low-tax, pro-business, pro-growth, right-to-work Texas and the high-tax, anti-business, marginally growing and heavily unionized California.

Given Brown’s previous policies as California governor and Oakland mayor, the situation is unlikely to improve.  Since becoming governor, Brown has been pushing an agenda that has little time or margin of error to achieve success in the sharply declining Golden State.

As soon as he came into office in January of this year, Brown made bold declarations about the future of the state and how he would govern.  His main agenda has focused entirely on the budget, and he has tried to position himself as a kind of fiscal conservative.

But Brown’s ultimate goal is to push the state further toward the “Blue State” (or welfare state) Model.

Brown said that he will “return decisions and authority to cities, counties and schools,” and “allow government at all levels to focus on core functions and become more efficient and less expensive.”

Brown also explained that he would make deep cuts in programs such as the Department of Developmental Services and the University of California, as well as low-income programs like CalWORKS and Medi-Cal.

While this may appear to be a bold declaration for federalism, localism and fiscal conservatism, Brown’s agenda seems to be, in fact, to push the state of California so far over the fiscal cliff that voters will find it necessary to pay higher taxes.

He initially made declarations that he might try to reform Proposition 13, which was a California initiative passed in the late 1970s that has protected homeowners from ever-increasing property taxes, and made any new taxes require a two-thirds majority in the state legislature.

The popular initiative was the first shot fired in the Reagan Revolution in 1980, and any kind of a blow to it would open the door in California to another massive wave of taxation.

When a proposal was put on the table to make changes to the initiative by Los Angeles Mayor Angelo Villaraigosa, Brown backed off, knowing that the political consequences could be devastating.

The frustration with the lack of success is pushing Brown to make more bizarre statements and propose more unfeasible ideas, and California continues to struggle with its ongoing bad policies.