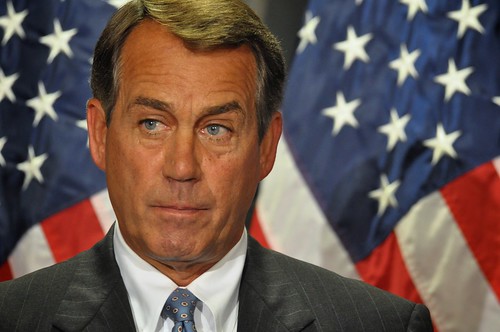 
Specifically, the GOP wants Obama to agree to cut government spending back to 2008 levels, put a spending cap on discretionary spending, and reform the budget process.

The GOP blames Obama and the former Democratic Congress for the out-of-control government spending that led to the rapid increase in debt.

The United States now has a record-setting $14 trillion in debt, and will hit the current statutory debt limit of $14.3 trillion as early as March.

The House GOP spent the weekend on a retreat in Baltimore discussing the upcoming fiscal battle with the President. The Republicans are planning to give Obama an ultimatum: Cut government spending if you want us to raise the debt ceiling.

“President Obama and Congressional Democrats have been on a job-destroying spending spree that has left us with nothing but historic unemployment and the most debt in U.S. history,” Speaker of the House John Boehner (R-Ohio) told the 218 House Republicans at the retreat.

Boehner said that Obama’s request for a higher debt limit will require changes in the way Democrats operate. “If they want us to help pay their bills, they are going to have to start cutting up their credit card. Cutting up the credit cards means cutting spending – and implementing spending reforms to ensure we keep on cutting,” he told his Members on Saturday.

(For years, Boehner has used the metaphor of a credit card when talking about the nation’s debt. He often holds up the electronic voting card, which Members use to record their votes, and refers to it as “the most dangerous credit card in the history of the world.”)

The Republicans have Obama over a barrel because if Congress does not pass a bill to increase the debt ceiling, the United States will default on its loans. The debt ceiling is the legal amount the U.S. government can borrow on credit.

Majority Leader Eric Cantor (R-Va.) told the Republicans at the retreat that the next few months are “leverage moments for Republicans, and an opportunity for us to enact real spending cuts and substantially change the way Washington works.”

Cantor told them that they will use the opportunity “force the President and [Senate] Leader Reid in our direction and begin to steer the country back to fiscal responsibility.”


Rep. Jack Kingston (R-Ga.) is a Member of the House Appropriations Committee, which determines the specific amounts of discretionary spending for the government. Kingston said the Republicans will not make any changes to the debt ceiling without specific spending reforms.

“We think it’s very important to tie in spending caps, deficit reduction, and recessions that take us back to the ’08 spending levels,” Kingston told HUMAN EVENTS.

The national debt, the accumulation of all the budget deficits, has dramatically increased in the last six years. During the four years of President Bush’s second term, the debt increased $3 trillion, largely due to the cost of the wars in Afghanistan and Iraq and the TARP bailout after the economy crashed,

The government is operating off the Democratic Congress’s budget, in the form of a Continuing Resolution (CR), which expires on March 4. At the current levels set by Democrats, the government will spend about $1.3 trillion more this year than it receives in revenue from taxes.

Although the House Republicans plan in the next month to replace the Democrat-level CR with lower spending levels, the government spending cuts will not happen quickly enough to avoid breaking the debt ceiling.

House Republicans are playing hardball with Obama on the debt ceiling, but they are hoping for bipartisan negotiation.

“We hope that the President comes to the table, and he acts in a responsible manner, rather than a political manner,” said Kingston.