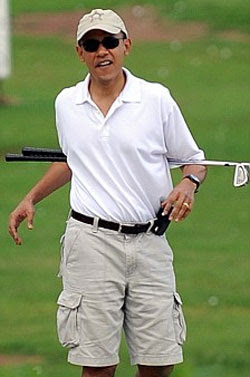 The online edition of Golf Digest highlighted the interest, particularly in the golfing world, surrounding Miller’s persistent updates on Obama’s golf adventures. Miller has kept an official tally, which currently stands at 57 rounds of golf in 23 months as President.

After President Obama took to the golf course again on Tuesday, Miller tweeted to her followers, “President Obama played golf today in Hawaii, his 56th round since taking office.”

This prompted PGA.com producer John Kim to reply to Miller, “That’s more than me! But then my job is …golf. Wait, that doesn’t seem right.”

Miller, as is her custom, promptly re-tweeted Kim’s tweet, but not before adding the question, “Obama golfs more than a PGA producer?,” to which Kim replied, “the old adage is: those who work in golf never get to play. Guess I need to run for President to hit the links!”

This exchange got picked up by many outlets, including Michelle Malkin’s blog, and eventually Golf Digest.

The American people have always been fascinated with their President’s golf game, perhaps because how a President conducts himself on the golf course often serves as a window into his character. In fact, Don Van Natta, Jr. even wrote a masterful book, First Off The Tee, on this very topic.

In a memorable anecdote describing his golfing experiences with Bill Clinton, Van Natta wrote that Clinton “does not take mulligans. He takes a type of do-over shot that is less obvious, more devious, and entirely his own invention. He takes Billigans.”

This description was fitting for a President who once tried to invent a new definition for the word “is,” was known to be duplicitous and conniving, lied to the American people about his extra-marital affairs with Monica Lewinsky, and certainly was known for his fair share of “do-overs” (no pun intended, of course).

One can wonder what Obama’s lack of transparency on the golf course says about his administration.

Does Obama do anything on the golf course that would qualify as an “Obamagan?” Why has he spent more days playing rounds of golf than attending church services?

Does Obama’s non-transparency when it comes to his golf game symbolize his administration’s lack of transparency on issues such as the implementation of ObamaCare? Does it reveal an insularity and a bunker-ed down mentality that his administration has towards the press and the American people?

Does Obama’s secrecy reveal an insecurity in a President too ashamed to reveal what may be horrible golf scores? Does it symbolize a President who is in over his head in the Oval Office and seeks escape and refuge on a golf course?

Some more questions: Does Obama golf better than he throws a baseball? Does he tee off on the ladies’ tee?  Why are his golf scores never released? Does Obama take mulligans? Does he secretly cheat when nobody is watching? With whom does he play golf?

One can also ask if lobbying is done on these golf outings. Does he secretly smoke cigarettes while playing golf? Is he a better or more audacious golfer than the self-proclaimed best golfer in the world, Kim Jong Il, the reclusive dictator of North Korea?

Stay tuned for these developments on HUMAN EVENTS and follow Miller on Twitter for real-time updates of Obama’s golfing escapades.