Toll The Bell On Earmark Spending Or Economy Will Die 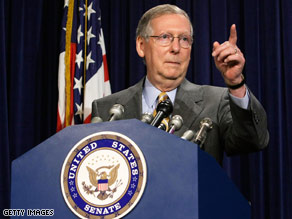 Senate Leader Mitch McConnell is the latest high-profile Republican to endorse a moratorium on earmarks, noting in a speech yesterday that such a move is “another small but important symbolic step” that Republicans must take to demonstrate that they are serious about curbing gargantuan government growth and reforming the budget process. We couldn’t agree more. In the past, McConnell has been a vociferous supporter of earmarks, but hey, we welcome his conversion. It now looks as if the GOP will stand united behind the moratorium. But that’s just the beginning. Republicans in the Senate plan on adopting an internal agreement to suspend such spending, similar to the measure that Republicans in the House passed. The agreement is non-binding and lacks any enforcement mechanisms, aside from public scolding, of course.

Let’s not forget that “earmarks” are a form of “institutionalized bribery,” as former Congressman Bob Walker puts it. Here’s how they work: Money is funneled to pet projects of lawmakers in exchange for their votes. Earmarks then lead to big appropriations measures that are partly responsible for our ever-ballooning federal deficit and national debt. For instance, since 1991, more than 109,000 “earmarks” have been attached to pieces of legislation for a combined taxpayer cost of $307 billion, according to the watchdog group Citizens Against Government Waste. In 2010 alone, there were more than 9,000 “earmarks” that porked taxpayers with a bill of $16.5 billion.

Those sums are nothing to sneeze at. The talk of an “earmark” moratorium must turn into a talk of earmark elimination. And the non-binding agreements must morph into definable action.

Here are three ways that Republicans in Congress can drive a stake through heart of earmarks and thus gain the trust of a public looking for grownups in Washington.

First, the House Republicans can write a ban into the rules. The GOP should define earmarks as “out of order” as they adopt “rules” for the new Congress. Earmarks would be dead on arrival. And if that doesn’t work, Speaker Boehner can specifically instruct committee chairmen not even to report committees’ bills to the full chamber if they have earmarks in them. On the Senate side, Dr. Tom Coburn of Oklahoma plans to force a vote on the moratorium as soon as Wednesday. The proposal would change the operating rules so that senators can raise “points of order” against legislative bills with earmarks in them. Every Republican should vote for Dr. Coburn’s amendment.

Second, GOP lawmakers must communicate a clear definition of earmarks so that everyone, especially the public, understands just what they are. Naturally, once the GOP goes on record to say that it is opposed to “earmarks,” the media and the Democrats will try to tar every Republican with having gone back on their “no-earmarks” pledge if the definition is too blurry for everyone to comprehend.

Third, Republicans must articulate that tackling the problem of earmarks begins the process of reforming the really big problem of entitlement spending, which leads to total insolvency by breaking the public banking system, and the public’s backs that support it. If the GOP can’t be trusted with halting spending that composes a fraction of our budget, how can it be trusted to grapple with the complexities of Medicare, Social Security, and other “untouchable” government programs?

An Interview With Brigitte Gabriel of ACT! for America