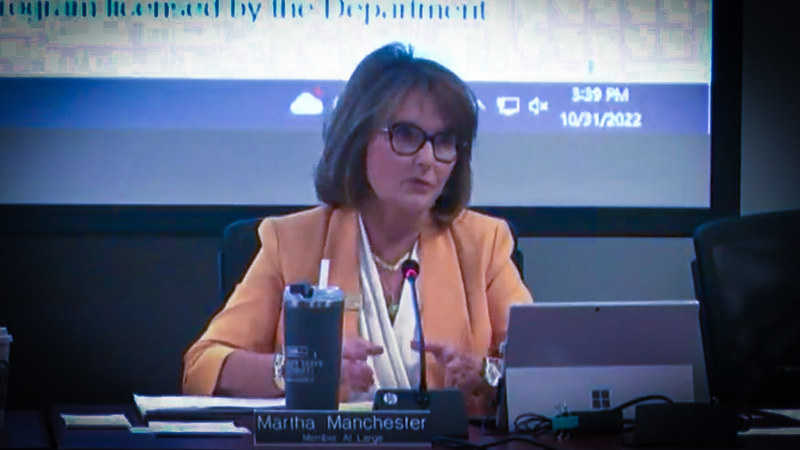 The vice president of the Ohio State Board of Education does not know what the definition of biological sex is, and does not think it is a scientific fact to say that there is just one definition.

Martha Manchester, who holds a Bachelor of Science degree in Education and has served on the State Board since Jan 2017, made the comments at an executive committee meeting convened to debate a resolution that seeks to reject Biden’s proposed Title IX change adding gender identity as a protected characteristic alongside sex.


The resolution, titled “Resolution to support parents, schools, and districts in rejecting harmful, coercive, and burdensome gender identity policies and to protect federal funding subject to Title IX” was introduced in September by board member Brandon Shea. It argues that “sex is not arbitrarily ‘assigned at birth’ but rather identifies an unchangeable fact” and suggests that the Title IX change would “require that K-12 schools socially transition minor children to a different gender without requiring parental consent.”

A video clip of the vice president’s confusion during the debate about the most fundamental fact of human existence was shared on Twitter by child-safeguarding advocate Chris Elston.

“How can we sit here and say, ‘No, there’s just one, and that it’s scientific fact. I guess that would be the issue I take with that right at the beginning, is that it’s not scientific fact,” Manchester bumbled on.

“If we look at the science, there are many different things, and why, I don’t know, but there are, and we need to be honest about that I think,” concluded the startling pronouncement.

Manchester’s confusion about such a basic fact of biology evidently stems from gender identity ideology pushing the idea that sex is complicated and impossible to define. Google “What is biological sex?” and the first page of hits contains a baffling array of articles about how sex is complex and there are more than two sexes.

On the top spot is Planned Parenthood, telling readers that the term biological sex “doesn’t fully capture the complex biological, anatomical, and chromosomal variations that can occur. Having only two options (biological male or biological female) might not describe what’s going on inside a person’s body.”

In an article titled The Myth of Biological sex, Forbes informs readers that “there is no one parameter that makes a person biologically male or female.”

“Females are individuals who do or did or will or would, but for developmental or genetic anomalies, produce eggs. Eggs are large, sessile gametes. Gametes are sex cells. In plants and animals, and most other sexually reproducing organisms, there are two sexes: male and female…the term female applies across many species. Female is used to distinguish such people from males, who produce small, mobile gametes (sperm, pollen),” explains evolutionary biologist Heather Heying.

In an effort to push the idea that the categories of male and female are blurry or don’t exist and that therefore males can be women if they say so, a favorite tactic of trans activists is to use people who are born with Disorders of Sex Development (DSDs) as pawns in their linguistic game.

Activists will point to people born with X0 Turner syndrome for example and suggest that these individuals are neither male nor female, ignoring the fact that Turner syndrome is a DSD that can only affect females. This exact argument was made by expert witness Dr. Greta Bauer in the hearing of a Canadian nurse on trial in British Columbia for allegedly transphobic beliefs, one of which is the belief that there are only two sexes.

The executive committee voted to hold an additional meeting on Nov 14 to continue the debate, according to WOWK 13 News.
Transgender, Education, Ohio
Ohio education VP says she doesn’t know what biological sex is