POSOBIEC: Biden Used His 9/11 Address to Attack Everyday Americans as 'Threats to Democracy' 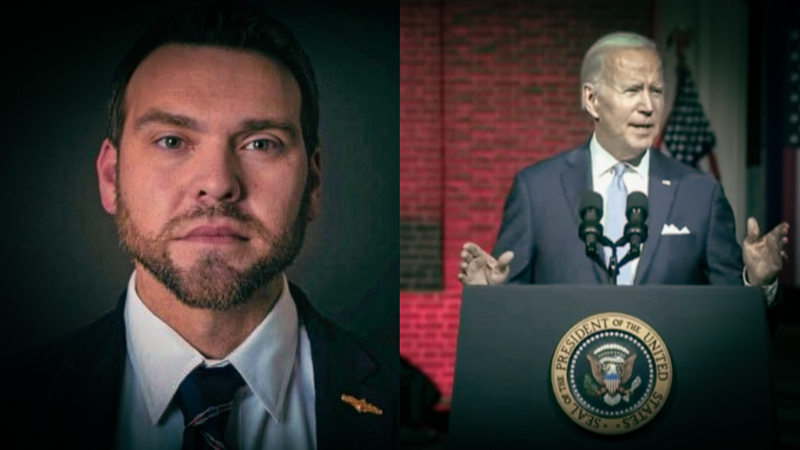 JackBiden
Human Events Daily host Jack Posobiec said on the latest instalment of his show that Americans need to be aware of how the current regime is using the law to lock up political opponents, after Biden’s 9/11 address included references to protecting “democracy.”

“It’s not enough to gather and remember each September 11th those we lost more than two decades ago.  Because on this day, it is not about the past, it’s about the future,” said Biden. “We have an obligation, a duty, a responsibility to defend, preserve, and protect our democracy, the very democracy that guarantees the rights and freedom that those terrorists on 9/11 sought to bury in the burning fire and smoke and ash,” he continued.

Posobiec asked his audience to listen to what Biden was actually saying with a trained ear.

“That’s the most important thing in the world,” said Posobiec sarcastically. “Don’t you dare ask questions about the borders of your own country, or whether your own country’s sovereignty is being defiled on a regular basis, and that there’s a humanitarian crisis going on, with hundreds of thousands per month coming across the border. Don’t worry about that, you have to worry about Eurasia, and the killing fields of a slavic border dispute that’s been going on for millennia.

“They’re putting 35 FBI raids, subpoenas, services that are going out. A whole new grand jury, not just on this idea of whether or not the election was conducted with integrity in 2020, but now even on fundraising for the Save America PAC. There’s another grand jury on that. Grand jury after grand jury after raid after arrest and perp walk after perp walk, and here’s all I have to say. The left doesn’t have to come up with little funny phrases like ‘tick tock, two more weeks and it’s going to happen.’ No. They don’t have to say that, because they can watch TV and they can see their political opponents being arrested every single day in this country. There’s one side that uses the legal system and lawfair that goes after the other, and that’s the side, if nothing changes, that’s going to win. You win when you’re willing to fight harder than the other side, period. End of story.

“Now I’d love to go back to a country where all of this was taken care of in a political space, with debate, with voting, where we get out of the legal space… Now they’ve brought the legal system into politics. They’ve politicized the judiciary, they’ve politicized our prosecutors all the way from the federal level to the local level, and you can see this. This was done in conjunction with academia, with law schools, and many other functions. But at the end of the day, this is what they’re doing. They’re trying to criminalize discent in this country. To the point that when I go on Instagram and post a photo of Trump in lower Manhattan on the week of 9/11, and I get fact checked on Instagram. A label gets slapped on that thing and says, ‘missing context.’”

“What context? I just posted a photo… I just said he went down there. I got fact checked because they want to put the brakes on that, because they don’t want anyone seeing, hearing, or knowing, that Donald J Trump actually is a good person. That he goes and does good things… Because no, he has to be a monster, and you have to be criminalized because they’re coming for you and coming for your families.

Vice President Kamala Harris also recently was criticized for equating January 6 to other days, like Pearl Harbor and 9/11. "Certain dates echo throughout history, including dates that instantly remind all who have lived through them where they were, and what they were doing when our democracy came under assault," said Harris.
Biden, Jack Posobiec
JackBiden