Connect with us
Dr. Mark Skousen discusses how the U.S. economy is not slowing down as business spending is continuing to rise.

ā??Gross Output provides an important new perspective on the economy and a powerful new set of tools of analysis, one that is closer to the way many businesses see themselves.ā?¯ — Former Bureau of Economic Analysis director Steve Landefeld

Is the U.S. economic boom coming to an end?

The federal government last month reported that real gross domestic product (GDP) growth, the ā??bottom lineā?¯ of national income accounting, slowed from 4.2% in the second quarter to 3.4% in the third quarter. Many pundits said that the slowdown will continue and that a recession is inevitable by 2020.

But todayā??s economic numbers suggest otherwise. Business spending, in particular, is rising at a faster pace.

Today, the federal government (Bureau of Economic Analysis in the U.S. Commerce Department) released third-quarter estimates of gross output (GO), the ā??top lineā?¯ in national income accounting. It measures spending at all stages of production, including the supply chain.

The results were eye-popping. Total spending on new goods and services (GO) topped $45 trillion for the first time.

Real GO climbed at an annualized rate of 4.6% in the third quarter to grow much faster than GDP. Business-to-business (B2B) spending rose even faster, 5.8% in real terms, much more than consumer spending, up 3.2%.

Business — Not Consumers — Drives the Economy

As economist Larry Kudlow states, ā??Though not one in a thousand recognizes it, it is business, not consumers, that is the heart of the economy. When businesses produce profitably, they create income-paying jobs and then consumers spend.ā?¯

Spending throughout the economy was broad based. Every sector in the third quarter grew except utilities and agriculture. Government spending rose 4.4% in real terms. (Does it ever go down?) For more details, go to www.grossoutput.com for our press release.

Faster GO Means No Recession in Sight for 2019

Whenever GO is growing faster than GDP, as it has been doing in 2018, itā??s a positive sign that the economy is still robust and growing. Thatā??s what we are seeing.

Fourth-quarter GDP will be released next week, Feb. 28. I expect real GDP to growth faster than 3.4%.

All this is very positive for the stock market. I continue to be fully invested in Forecasts & Strategies.

For the full press release on third-quarter GO, and for more information on GO, go to my website, www.grossoutput.com.

CFA Society Book Club, Thursday, Feb. 28, Biltmore Court, Los Angeles: Iā??ll speak about my book, ā??The Making of Modern Economics: The Lives and Ideas of the Great Economic Thinkersā?¯ (Routledge, 3rd ed.) Find out why John Mackey (CEO, Whole Foods Market) has read it three times! The title of my talk: ā??Whoā??s Winning the Battle of Ideas: Keynes, Marx or Adam Smith?ā?¯ The event includes dinner, 5:30-7:30 pm. The price is only $15 for my subscribers to attend. To reserve a spot, email info@cfala.org. You also can register at https://www.cfala.org.

It took me eight years to get him, and now he’s coming!

Penn Jillette of ā??Penn & Tellerā?¯ fame (the longest-running headliner show in Las Vegas), Emmy-award winner and cultural phenomenon! Penn Jillette & Raymond Teller are famous for revealing many of the secrets of magic, a ā??no noā?¯ among magicians. In his special FreedomFest talk, he will reveal the ā??sleight of handā?¯ behind the dangerous new ā??socialistā?¯ agenda in America. His presentation is not to be missed!

He will speak on Friday evening, July 19, 2019, on ā??The Magic of Liberty.ā?¯ After his talk, Iā??ll be interviewing him about his incredible career, followed by Q&A from the audience, and a private reception (photo, autograph) with attendees and speakers (limited to 100 attendees).

I’m excited. I’ve seen ā??Penn and Tellerā?¯ a half dozen times in Vegas and “Fooled Us!” on cable TV. Penn Jillette probably is the most famous libertarian today.

Between Penn Jillette and Kevin O’Leary of “Shark Tank” fame, I think we have the makings of a record crowd. Watch our three- minute video about this yearā??s big show: https://vimeo.com/311525927. Password: eastwood. Sign up today and take advantage of the ā??early birdā?¯ discount, which ends March 29, by going to https://www.freedomfest.com/register-now/ or by calling 1-855-850-3733, ext. 202. Save $200 off the retail price. You pay only $495 per person/$795 per couple. Be a part of “the greatest libertarian show on earth,” including our three-day financial seminar sponsored again this year by Eagle Publishing and Forecasts & Strategies.

Has Barronā??s Drunk the Purple Kool-Aid?
You Blew It!

ā??Radical changes in energy generation and consumption will be required to prevent the earth from becoming uninhabitable by the end of the century.ā?¯ — Matthew C. Klein, Barronā??s
I see the new economics editor, Matthew C. Klein, warns in the latest issue of Barronā??s that the sea level will rise by six FEET by the end of the century if something isn’t done about global warming/pollution. He states, ā??Under those conditions, global sea levels could rise at least six feet as polar ice melts. Many coastal areas would need to be evacuated. Droughts, fires, and heat waves would depress global crop yields.ā?¯

Apparently, my subscribers living in Miami are a big trouble, based on those warnings. Never mind that the city is building new skyscrapers along Miami Beach.

I have a more sobering view, as you probably can surmise from last weekā??s Skousen CAFĆ?. Check out the chart on pollution in Los Angeles: 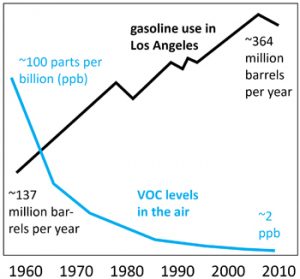 Barronā??s should know better than to promote this kind of anti-growth agenda and hysteria. I say bring back Gene Epstein, the former economics editor of Barronā??s.

Income Hunting: Why Yield Matters (And How to Lock It In)

Trump’s Failing. Don’t Ask Me to Lie About It.