As the year began, Wein issued his annual ???Ten Surprises for 2019??? list, which represents the man???s 34th year of issuing predictions for the coming year. According to Blackstone, Wein defines a ???surprise??? as an event that the average investor would only assign a one out of three chance of taking place, but which Wein believes is ???probable,??? i.e. having a better than 50% likelihood of happening.

This year, Wein has a few surprises on his list in which I strongly concur. Atop my agreement list is the following Wein surprise:

???The weakening world economy encourages the Federal Reserve to stop raising the federal funds rate during the year. Inflation remains subdued and the 10-year Treasury yield stays below 3.5%. The yield curve remains positive.???

I, too, think the Fed???s ???pause??? here is for real, and I do not suspect Chairman Powell and his colleagues will upset the market???s apple cart in 2019. Just today, we got confirmation of that via the minutes of the Fed???s January Federal Open Market Committee (FOMC) meeting. Here???s the key statement from the minutes:

Another point of agreement I have with Wein is this surprise:

???Growth stocks continue to provide leadership in the U.S. equity market. Technology and biotech do well as a result of continued strong earnings.???

Here I also agree, but I don???t think this is that big of a surprise. Simply put, technology and biotech are where the innovation and big earnings growth are, and that???s where the growth and profit opportunities will continue to be for many years to come.

In fact, just today, we added some technology exposure to our holdings in my Successful Investing advisory service.

Finally, there is this political surprise, which I also agree with, but which I also don???t think is a very big surprise based on what???s happened over the past couple of months.

???The Mueller investigation results in indictments against members of the Trump Organization closest to the president but the evidence doesn???t support any direct action against Trump himself. Nevertheless, an exodus of Trump???s most trusted advisors results in a crisis in confidence that the administration has the people and the process to accomplish important goals.???

We???ve actually seen this happen already, at least around the periphery with former campaign chair Paul Manafort. Yet I suspect things will get worse for President Trump in 2019 with respect to the Mueller probe, and that this will act as a general political headwind of uncertainty on stocks for the remainder of the year. So, be forewarned.

Finally, I wanted to remind you that tonight I will be attending a webinar hosted by my friend Rich Checkan, president and COO of Asset Strategies International (ASI). Rich also is a former U.S. Army officer, West Point graduate and all-around ???big brain??? when it comes to the topics of gold and precious metals investing.

Rich is my go-to guy for all things related to metals, and I strongly recommend ASI if you want to own physical gold, silver and other precious metals.

The webinar is taking place tonight, Wednesday, Feb. 20, at 8 p.m. EST. In it, Rich and fellow investment expert Chris Blasi will be discussing recent news events that have heightened investor uncertainty.

Worries over the aforementioned Fed ???pause,??? trade wars, a dysfunctional political climate and a slowing global economy all will be topics on the agenda. And of course, we???ll find out what strategies Rich and Chris recommend to help investors deal with that uncertainty.

I strongly recommend checking out this webinar along with me, as I always look forward to hearing the smart opinions of my friend Rich and his colleagues.

As you likely know, one of the core principles of The Deep Woods is freedom, and in all of its forms. Freedom of thought, speech, exchange, commerce, association and the freedom that states the unequivocal autonomy of the individual, is a concept that underpins my worldview.

And to perhaps no one???s surprise, my favorite event each year celebrates freedom in all its forms, and it also happens to be the brainchild of my friend and Fast Money Alert co-editor, Dr. Mark Skousen. Yes, it is the annual FreedomFest conference, and this year, it???s going to be extra special.

This year, Mark and his FreedomFest team have scored the great Penn Jillette of ???Penn & Teller??? fame, as one of the featured speakers. In this special FreedomFest talk, Penn will reveal the ???sleight of hand??? behind the dangerous new ???socialist??? agenda in America. His presentation is not to be missed!

He will speak on Friday, July 19, 2019, on ???The Magic of Liberty.??? After his evening talk, Mark will interview Penn about his incredible career, followed by Q&A from the audience and a private reception (including photo and autograph opportunities) with attendees and speakers (limited to 100 attendees).

Between Penn Jillette, Kevin O???Leary of ???Shark Tank??? fame, and yours truly, this year???s FreedomFest is going to be awesome. I recommend watching the three-minute video about this year???s big show at https://vimeo.com/311525927. Password: eastwood

You will save $200 off the retail price, which means you pay only $495 per person/$795 per couple. Be a part of ???the greatest libertarian show on earth,??? including our three-day financial seminar sponsored again this year by Eagle Publishing and Fast Money Alert.

So, come celebrate freedom with me in Las Vegas. I guarantee you???ll love it!

The headline isn???t as dramatic as the plot-theme of dystopian novels such as George Orwell???s ???1984??? or Aldous Huxley???s ???Brave New World,??? but the consequences could be just as dire.

The headline I am referring to is news that the national debt has just hit $22 trillion for the first time, setting a new record. Oh, and just in case you were wondering, that debt figure works out to approximately $66,000 for every man, woman and child in America.

The self-inflicted wound of a near-unthinkable debt burden is bad enough, but things get worse when you look at the destructive trajectory of debt that literally could collapse the free world.

In a great piece on the facts of the debt issue, Eric Boehm writes at Reason.com about the pernicious trajectory of that debt in the years to come:

???Look a few more years into the future and things really start to accelerate. Unlike a decade ago, when the so-called Great Recession (and the questionable federal policies crafted in response to it) caused deficits to spike. The current increase is not a short-term problem that will be solved as soon as the economy rights itself. Instead, we???re now at the beginning of a long upwards climb that has no end in sight — unless significant policy changes are enacted.???

Boehm goes on to present a chart of Congressional Budget Office (CBO) projections that show the national debt set to grow sharply relative to America???s gross domestic product (GDP) over the next few decades.

Here is the frighteningly dystopian chart based on CBO data, as compiled by the nonpartisan Committee for a Responsible Federal Budget (CRFB), in a recent paper. 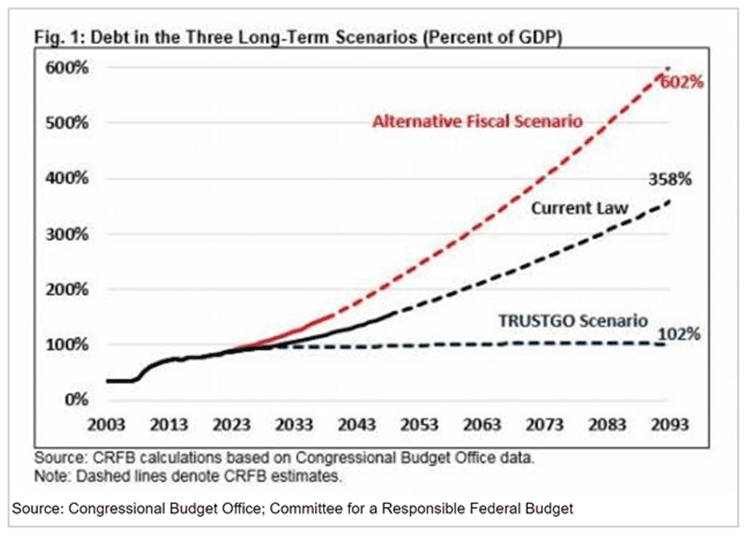 There is, however, an ???alternative fiscal scenario,??? as Boehm points out, and that assumes current policies (i.e. the current tax rates) are kept in place. If that is the case, then the debt would spike to 225 percent of GDP by 2050 and would surge to 600 percent of GDP by 2093.

Now, you don???t have to be one of the world???s most influential living economists like my friend Dr. Mark Skousen to figure out that these debt levels are simply unsustainable and unserviceable no matter how much government theft occurs from citizens. Yet there is absolutely no sense of urgency, or even a mention, from the political class. Now, I am a big supporter of tax cuts in general, and I backed President Trump???s 2017 tax cuts. They didn???t go far enough, in my opinion, but they were a good start.

Yet what the president failed to address at all is the national debt, and for all of the things the president mentioned in the recent State of the Union, there wasn???t one mention of the burgeoning debt, or how to corral it. Moreover, there is no attempt to cut spending on anything.

Sadly, the issue isn???t even on the radar in the administration. And as Boehm points out, ???Mick Mulvaney, the president???s acting chief of staff and a former congressional budget hawk, now says ???nobody cares??? about the debt.???

Well, maybe that???s true. Maybe most people don???t care about it, but I want The Deep Woods readers to care about it, because it???s a ticking time bomb waiting to destroy your portfolio?

Well, the short answer is, paradoxically, not much, yet. I say that, because if you are investing smartly, you are following the wider trends in the stock market on a more intermediate term than the debt debacle appears to be.

Yes, you should be aware of the threat, but you shouldn???t be acting on that threat now as it will only prevent you from investing in great companies that continue to grow earnings, innovate and create wealth for shareholders. And, not investing now will only keep you from becoming more fiscally fit if and when that debt storm finally hits U.S. shores.

It Is Always Now

???It is always now. However much you feel you may need to plan for the future, to anticipate it, to mitigate the risks, the reality of your life is now.???

The philosopher, neuroscientist and best-selling author remind us of something that we all know, but something that we often fail to be fully aware of at any given moment. The fact is that all we ever have is right now. Yes, we must invest for the long-term, make a legacy plan for our loved ones and make sure we are taking care of our future selves. Yet when you stop and think about life experientially, the present moment is all that we ever have. So, doesn???t it make sense to be aware of the beauty and majesty of this moment as it???s occurring? There really is only now, so why not savor your life moment to moment?

Wisdom about money, investing and life can be found anywhere. If you have a good quote that you???d like me to share with your fellow readers, send it to me, along with any comments, questions and suggestions you have about my newsletters, seminars or anything else. Click here to ask Jim.

In the name of the best within us,