The Xtrackers MSCI EAFE Hedged Equity ETF (DBEF) is an exchange-traded fund (ETF) that tracks an index of developed-market equities outside of the United States and Canada.

In some ways, it is similar to the EFA exchange-traded fund as they both use the MSCI EAFE index and share the same focus on large-cap companies, while steering clear of equities in Canada. However, a major difference between the two ETFs is that DBEF uses a currency hedge to provide access to local equity returns without the perils that come from currency fluctuations.

The presence of the currency hedge also matters when comparing this ETFâ??s performance to the sector benchmark and un-hedged competitors, especially when there are large movements in the exchange rate between the U.S. dollar and the yen, euro and pound sterling.

Thus, it is good that this ETF is relatively insulated from shocks in the global money market, especially the ones that revolve around the uncertainty around Brexit and the impact that it will have on the values of the pound sterling and the European economy. 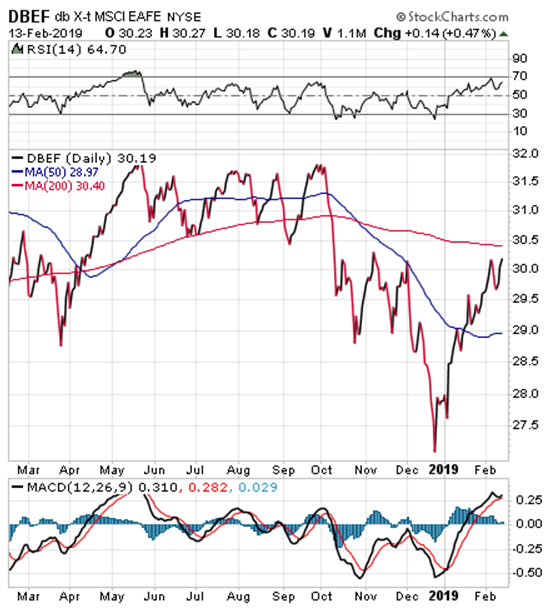 The only problem is that when you get interested in foreign market equities, you also must become intertwined with their economies. Not all the countries that are represented in this ETF are doing very well. Not only is Great Britain still trying to find a way out of the European Union, the Italian and Spanish economies are not doing very well either. These factors could influence the value of this ETF later on down the road.

The fund currently has $4.86 billion assets under management, a $63.03 million average daily volume and an average spread of 0.03%. It also has an expense ratio of 0.35%, meaning that it is slightly more expensive to hold in comparison to other exchange-traded funds.

In short, while DBEF does have several advantages over some of its peer funds, its risks are not zero. Interested investors always should do their due diligence and decide whether the fund is suitable for their portfolios.

As always, I am happy to answer any of your questions about ETFs, so do not hesitate to send me an email. You just may see your question answered in a future ETF Talk.

THE TRUTH ABOUT GLOBAL WARMING: REAL THREAT OR HYSTERIA?