???Free market democratic capitalism is a thing of beauty. Anyone can become a capitalist and should be.??? — Ben Stein, ???The Capitalist Code???

Ben Stein is quite a character. He is best known for his role as a dull high school teacher of economics in the ever-popular classic teenage film, ???Ferris Bueller???s Day Off.??? Whenever he speaks to students, he is encouraged to repeat his famous line, ???Bueller? Bueller????

Stein used the memorable line when he appeared at our first FreedomFest back in Las Vegas 2002 (when it was called FEE Fest).

Stein also is known for his very clever and entertaining game show from 1997 to 2003 called ???Win Ben Stein???s Money.??? It was similar to ???Jeopardy,??? except that Stein not only asked questions, but at the end of each show, became a contestant, which was something Alex Trebek has never done.

But for us investors, he should be known as a financial economist and author of several books on personal finance and investments, co-authored with his expert associate, psychologist Philip DeMuth.

Stein quotes many of my favorite economists and financial advisors, including Adam Smith, Milton Friedman, Warren Buffett, Burt Malkiel and Jeremy Siegel. Stein learned his economics from his father, Herbert Stein, who was chairman of the Council of Economic Advisors under President Richard Nixon. (Sadly, Herb failed to dissuade Nixon from imposing wage-price controls and going off the gold standard.)

Ben Stein???s latest financial book is called ???The Capitalist Code: It Can Save Your Life??? and is available on Amazon here. This small book is light reading but has a serious message.

He warns people young and old that in today???s world anything can happen. If you are not careful, you can end up losing your job, running out of money, going bankrupt. He describes the time he lost his job working for Nixon and was at the time overcommitted to an expensive house and lifestyle.

He learned then and there that you should constantly save money for a rainy day. Never underestimate the need for liquidity! As Ben Franklin once said, ???There are three friends in life — an old wife, an old dog, and ready money!???

Stein quotes a wise friend from law school, ???It???s simple. Work and save.??? As George Clason put it in his classic book, ???The Richest Man in Babylon??? (highly recommended for students and adults — order on Amazon): ???A part of all you earn is yours to keep.???

Ben Stein would add, invest your savings wisely in a stock market index fund such as S&P 500 Index Fund (SPY). He said that is the best and simplest way to become a capitalist. Become a part owner in the 500 largest publicly traded companies in America, and hold for the long term, through thick and thin (trying to time the market is usually a mistake, he warned).

As long as the United States is primarily a free-market capitalist economy, the stock market inevitably will move ahead, and Wall Street should be a great source of wealth. If you invest regularly, you will never run out of money in retirement.

Let me end by wishing you all a very Merry Christmas and a most prosperous New Year!

Orlando MoneyShow, Feb. 7-10, Omni Orlando Resort: Mark will be leading a main-stage panel on ???The Best Places to Put Your Money in 2019,??? plus a workshop on ???Flying Five Strategy: My Favorite Way for Conservative Investors to Beat the Market and Earn High Income.??? Other speakers include Louis Navellier, Jeffrey Saut (Raymond James), Stan ???The Annuity Man,??? Steve Moore, Brien Lundin, Mark Mobius, Jim Lowell, Kelley Wright and fellow newsletter writers Hilary Kramer and Mike Turner. Tickets are complimentary. Call 1-800-970-4355 and be sure to mention you are a subscriber to Forecasts & Strategies. Use code 046878.

Cuba is hot as a destination! All cabins aboard the five-star Oceania Insignia for our November 9-16, 2019, cruise (next year) have sold out EXCEPT ours. And we have to turn back any cabins not sold by the end of December. I urge you to sign up now before it???s too late. This week-long trip to Cuba is special — we will be given a private tour in Havana by a free-market economist who actually lives in Cuba and will show us parts of ???communist-controlled??? Havana that no one else sees. This cruise is not to be missed!

Save $250 on Super Early Bird Discount

Giddy Up!   The ???Wild West??? Show at FreedomFest is Now Posted:  I???m happy to announce that our big showdown is shaping up nicely. For a list of keynote and celebrity speakers, topics and events (including a square dance and Libertarian Duel in the Vegas Sun), check out our updated website, www.freedomfest.com. 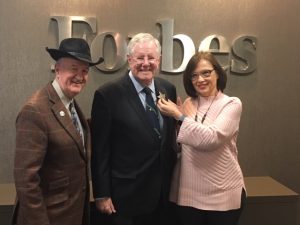 The Super Early Bird discount for FreedomFest is going on now through Feb. 1. Talk it up with your friends and family during the holidays. The dates are July 17-20, 2019, at the Paris Resort, Las Vegas. By signing up before Feb. 1, you save $250 off the retail price of $695 per person. You pay only $445 per person, and an additional $300 per guest. Act now, the discount ends on Feb. 1.

You Nailed It!
The Cato Institute Takes on the Jones Act, One of the Dirty Dozen

???The Jones Act has wreaked havoc on the U.S. economy??? at an estimated annual cost of tens of billions of dollars.??? — Cato Institute

I???ve been compiling what I call the ???Dirty Dozen??? of federal laws and programs that ought to be abolished or seriously reformed. They include ObamaCare, Ethanol in gasoline, Sugar Subsidies, Medicare, Social Security??? If you have any suggestions, please send them to me at customerservice@markskousen.com.

One program that deserves top billing on the ???Dirty Dozen??? list is the Jones Act, which some economists estimate is costing us taxpayers tens of billions of dollars. The Jones Act is estimated to raise the cost of gasoline by 10 cents a gallon, and other consumer goods. It is partially responsible for the excessive traffic congestion of trucks on our highways. And it has destroyed the U.S. shipping industry, which used to be #1 in the world.

What is the Jones Act? It is a law that has been on the books since 1920. Officially called the Merchant Marine Act, it requires all ships traveling between U.S. ports to be U.S.-owned, U.S.-crewed, U.S.-registered, and U.S.-built. The Jones Act is a classic case of America First protectionism.

And yet the unintended consequences are shocking — raising transportation costs, causing massive traffic jams and wiping out a once-vibrant shipping business in the United States.

Last week, the Cato Institute held a one-day conference on the Jones Act. I watched some of the proceedings. Sadly, only half the auditorium at Cato was filled. Cato has a real challenge to get rid of this ???archaic, burdensome law??? as long as Trump is president. But we wish them well. For more information, go to https://www.cato.org/project-on-jones-act-reform.