Connect with us
Renault-Nissan-Mitsubishi Alliance

The Renault-Nissan-Mitsubishi AllianceĀ forged by recently imprisoned leader Carlos Ghosn has helped all three companies and should survive to offer investing opportunities amid likely activism by the governments of France and Japan where the manufacturers are headquartered.

Much value already has been achieved by the Renault-Nissan-Mitsubishi AllianceĀ for cost savings, as well as shared parts and suppliers, among other advantages, but the three companies still could enhance shareholder value despite the arrest of one the auto industryā??s most visionary executives. Ghosnā??s confinement since Nov. 19 in an austere Japanese prison while authorities consider charging him with underreporting his income by an estimated $44 million over five years understandably could worry investors, but representatives of the Renault-Nissan-Mitsubishi AllianceĀ could calm matters at their scheduled meeting in Amsterdam on Nov. 29.

France-based Renault SA (OTC:RNSDF; RNO.FP) may have benefitted the most from the alliance due to its 43 percent ownership of bigger and more profitable Nissan Motor Co. (NSANY). Renault also is the only one of the three so far not to replace Ghosn as its chairman. However, Renaultā??s relative strength in the alliance may be waning with Nissan now selling one-third more cars annually than its partner.

Nonetheless, Renaultā??s stake in Nissan nearly triples the latter companyā??s 15 percent share of its France-based alliance member. Renault, on the other hand, does not have an equity stake in Mitsubishi. However, the French government owns 15 percent of Renault and could be a factor in determining the companyā??s future course.

The Renault-Nissan-Mitsubishi AllianceĀ combines to build one of every nine cars sold globally. The three companies employ 470,000-plus people in almost 200 countries. Mitsubishi Motors Corp. (OTC:MMTOF), the smallest alliance member, aligned with the others in 2016 when Nissan acquired 33 percent of its fellow Japanese automaker. Both Nissan, Japanā??s second-largest auto maker, and Mitsubishi are among the car manufacturers worldwide that have admitted to falsifying diesel emissions tests.

Ghosn was removed as chairman of Nissan last week by the automakerā??s board after his Nov. 19 arrest in Tokyo on suspicion of financial misconduct while serving as its chairman. GhosnĀ previously championed the successful three-way alliance between Mitsubishi (MMTOF), Nissan (NSANY) and France’s Renault (RNSDF). He reportedly had been considering trying to pursue an outright Renault-Nissan merger.

However, Nissanā??s board of directors reportedly had opposed that move and sought ways to block the plan. With Renaultā??s stock price falling more than 30 percent so far this year, news reports indicate that Nissan may use Ghosnā??s ouster as a reason to pursue more equalized ownership stakes between the companies. The possibility of rebalancing the equity stakes between Nissan and Renault led to an upgrade of the France-based manufacturer on Nov. 23 by Jeffries.

Hilary Kramer, who advised the sale of Ford Motor Company (NYSE:F) to subscribers of herĀ Turbo TraderĀ andĀ Inner CircleĀ advisory services, currently not is recommending any automakers but is following the developments within the Renault-Nissan-Mitsubishi Alliance.

In addition, Mitsubishi CEO Osamu Masuko, who has been appointed chairmanĀ to replace the imprisoned Ghosn pending a general shareholders meeting, has been the Japanese automakerā??s day-to-day leader since June 2014, Kramer added. Ghosn’s removal as chairman at the company will not impact Masukoā??s decisions, she added.

ā??While Mr. Ghosn was a visionary with his alliances, I think the bulk of his impact was already felt in the company, and in recent years he took on more of a typical chairman’s role of overseer,ā?¯ said Kramer, whoseĀ Value AuthorityĀ investment advisory service has achieved double-digit percentage profits in its past six closed positions. ā??This is what the market is telling you with the lack of an extended downturn in the shares.ā?¯

ā??Carlos Ghosn is one of the best CEOs in recent memory,ā?¯ said Jim Woods, editor of Successful Investing and Intelligence Report. ā??His acumen and vision resurrected a struggling Nissan, and the engineering of the alliance with Renault and Mitsubishi was a business school case study in efficacy.ā?¯

Woods said he would reserve judgment on Ghosnā??s possible guilt until the evidence is presented. But due to the ā??seriousness of the charges,ā?¯ it makes sense for the companies to seek to distance themselves from the jailed executive, Woods added.

Renault is holding back on abandoning Ghosn amid the accusations. Ghosn and Greg Kelly, an executive who was arrested on suspicion of collaborating with Ghosn, are arranging Japanese legal representation to prove their innocence. While incarcerated, Ghosn has not commented publicly.

Neither of the two auto executives have been charged and may not be for up to 20 days, since Japanese law allows a suspect to be held in custody for that long without formal charges.

The arrests have put the governments of France, the United States and Japan squarely in the middle of the intrigue. Television stakeouts have shown what are described as diplomatic vehicles from French and American embassies to provide Ghosn and Kelly with legal guidance.

Japanā??s Chief Cabinet Secretary Yoshihide Suga said on Nov. 20 that it is important for the Renault-Nissan-Mitsubishi Alliance to remain stable. He did not elaborate on the potential guilt of either accused executive. Instead, Japanese prosecutors are expected to claim the two executives violated Japan’s Financial Instruments and Exchange Act, according to Automotive News.

A strengthened Renault-Nissan-Mitsubishi AllianceĀ to develop future vehicles could give the three partners extra support in enhancing their efficiency and innovation to compete with Elon Musk-led Tesla Inc. (NASDAQ:TSLA) and other manufacturers seeking to serve the self-driving and electric car markets. For now, the companies will need to show investors there will be no leadership void with Ghosn in prison. 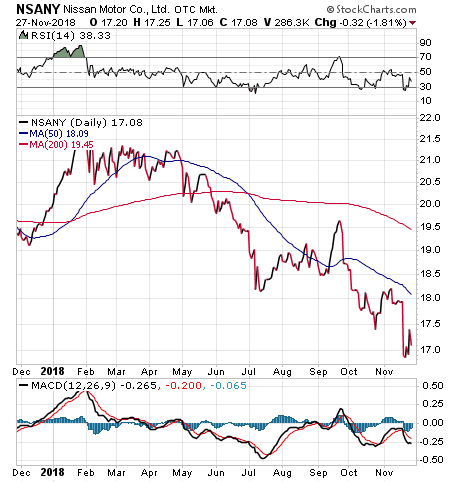 The future of the Renault-Nissan-Mitsubishi AllianceĀ will affect not only investors but the entire auto industry as a battle for survival rages amid a marketplace that is shifting toward self-driving and electric vehicles. The fate of the individual companies will be affected by how they navigate through whatever leadership transition each entity undertakes and the potential role of foreign governments, such as France as a part-owner of Renault, and Japan, as the home of Nissan, Mitsubishi and the prosecutors of Ghosn.

Is a Year-End Stock Market Rally in the Cards?