Connect with us
Paul Dykewicz delves into the best satellite stock recommended at the 2018 Baron Investment Conference.

The best satellite stock to buy is Iridium Communications Inc. (NASDAQ:IRDM), according to the 2018 Baron Funds Investment Conference, which featured a presentation from the top executive of the global mobile voice and data communications services provider.

One of the big appeals of the communications company as the best satellite stock to buy is its $3 billion investment since 2010 to build its Iridium NEXT program to place a new generation of 66 satellites in low-Earth orbit roughly 485 miles, or 780 kilometers, above the planet’s surface. With the renewed constellation scheduled for completion on Dec. 30, Iridium will enjoy a capital expenditure ???holiday??? for the next 10 years, said Matt Desch, its CEO.

Iridium NEXT is replacing the company???s original constellation by launching 75 satellites into low-Earth orbit on a SpaceX Falcon 9 rocket for eight different missions. SpaceX, founded in 2002 by entrepreneur Elon Musk, helped Iridium, based in McLean, Virginia, put its new satellites into orbit by launching them with his company???s reusable boosters, which halved the launch costs of Baron???s best satellite stock recommendation.

Iridium’s investment, which will enhance essential communications for the U.S. Department of Defense, emergency responders and private industry, gained praise from Barclays PLC. The investment firm rated Iridium’s stock “overweight??? upon starting to cover the company on Oct. 30.

Ron Baron, chairman of Baron Capital, which sponsored the Nov. 9 investment conference that featured Iridium???s CEO Matt Desch as one of four CEO speakers, said, ???We own 10% of Iridium, which we bought at $6 per share and it now is worth $20 a share.”

Iridium, which has one-of-a-kind capabilities to provide vital communications services for U.S. national defense, other government services, disaster relief, maritime, aviation, mining, forestry, oil and gas, heavy equipment, transportation and utilities, closed at $19.96 a share on Nov. 13, dipping $0.17, or .84 percent, as the market slipped on the day.

A market observer who likes Iridium but has yet to recommend it is Jim Woods, editor of Successful Investing and Intelligence Report, who is holding off on endorsing the company until it boosts its earnings per share (EPS) growth. Woods acknowledged he has been tracking Iridium for his trading services and noted that the company???s relative share-price performance in the past 52 weeks has ???outpaced 97 percent??? of all publicly traded stocks.

If Iridium boosts its EPS growth, Woods said he would turn into a buyer of Iridium shares.

Iridium reported third-quarter total revenue of $136.8 million, consisting of $105.7 million from services and $31.0 million from equipment sales and engineering and support projects, to rise 17 percent compared to the same period of 2017. Service revenue, primarily from recurring sales to Iridium’s growing subscriber base, jumped by 18 percent from the year-ago quarter and accounted for 77 percent of the company???s total revenue in Q3 2018.

Without analyzing beneath the surface, Iridium???s Q3 2018 net loss of $12.9 million, or $0.13 per diluted share, may seem ominous compared to net income of $29.3 million, or $0.23 per diluted share, for the third quarter of 2017. However, the decrease in net income primarily stems from a $39.2 million increase in depreciation and amortization expenses from Q3 2017 due to a growing number of Iridium NEXT satellites in service.

The company???s operational earnings before interest, taxes, depreciation and amortization (OEBITDA) for third-quarter 2018 reached $79.4 million, compared to $71.8 million for the prior-year’s third quarter, to achieve a year-over-year increase of 11 percent and an OEBITDA margin of 58 percent. Iridium???s OEBITDA benefited from higher commercial service revenue and strong equipment sales. 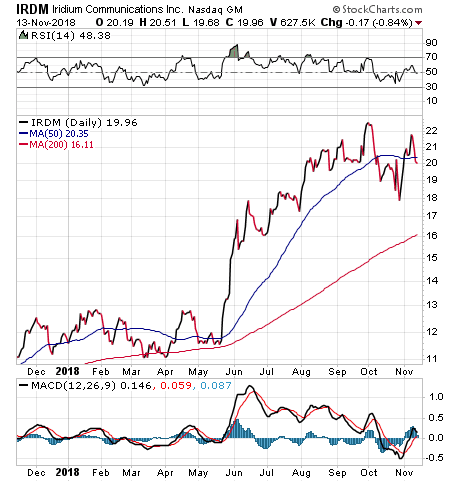 Iridium Communications reported Q3 operational earnings before interest, taxes, depreciation and amortization of $79.4 million to beat analysts??? consensus estimates of $74.9 million, according to FactSet. The company also outperformed on the Q3 revenue front by reaching $136.8 million, compared to FactSet???s consensus estimate of $128.4 million.

In addition, Iridium ended the third quarter of 2018 with 1.1 million total billable subscribers, which tops 949,000 for the year-ago period and is up from 1.0 million in the quarter ended June 30. Total billable subscribers rose 15 percent year over year, led by growth in the internet of things (IoT) and government customers that include the U.S. Department of Defense.

Desch said the fastest-growing area for Iridium is the internet of things. Examples include asset tracking of refrigerated containers and the energy industry???s remote monitoring of oil and gas pipelines, as well as wind farms, he added.

Seven of the eight launches to carry Iridium satellites into orbit already have taken place, with the last one scheduled to carry 10 final satellites aloft on Dec. 30 from Vandenberg Air Force Base in California. The first launch to replace the aging satellite constellation occurred on January 14, 2017, to usher in heightened capabilities through the Iridium Certus broadband service and the Aireon real-time aircraft surveillance system. Once the last mission is carried out, Iridium will have 66 operational satellites, nine in-orbit spares and six ground spares.

Iridium Certus will provide the fastest L-band broadband service in the world and allow the company???s customers to use even smaller and more cost-effective terminals, Desch said.

Desch also told attendees at the Baron event on Nov. 9 that lost aircraft, such as Malaysia Airlines Flight 370, which went missing in 2014 when it veered off course never to be seen or heard from again, can be avoided with the use of Aireon. After taking off from Kuala Lumpur for Beijing and reaching a cruising altitude of 35,000 feet, or 10,700 meters, the Boeing 777 disappeared with 227 passengers and 12 crew members on board, triggering a failed search stretching from the Indian Ocean west of Australia to Central Asia.

Iridium currently has 60,000 subscribers for its aviation services by focusing on cockpit communications, not the highly competitive spectrum used by passengers, Desch said. Iridium helps pilots communicate with air traffic controllers, he added.

The original Iridium, which launched commercial service on November 1, 1998, became ???quite infamous??? for its financial failure, Desch said.

One former Iridium leader told me years ago, when I covered the satellite industry as a beat, that certain officials at Motorola, which started the communications company with partner organizations, advocated deorbiting the financially fizzling constellation and burning up the satellites during reentry to the Earth???s atmosphere. However, other Iridium executives and directors recognized the value of the satellite system for providing service, even if the original cost structure that required more than $6 billion in funding proved crushing.

The initial concept was to put ???cell towers in space,??? Desch said. That pioneering company???s first products were large satellite phones and a pager.

I remember vividly using one of those first-generation Iridium phones in Paris, France, and needing to go outside in the rain on a street to obtain line of sight to the company???s in-orbit satellites to call the United States. The calls in the earliest days of Iridium also tended to drop in the middle of conversations, while much less expensive cellular phones already were widely available, gaining market share and far less likely to disconnect accidentally.

Even though the original Iridium went bankrupt, its assets later were purchased in late 2000 by private investors for $25 million with a financial lifeline extended by the U.S. Department of Defense in the form of a $36 million annual contract to obtain unlimited airtime for 20,000 U.S. troops to gain mission-critical communications services worldwide. That contract was a huge boost to the Iridium system’s ultimate survival, I previously reported based on an exclusive interview with one of the companies past chief executive officers, because fewer than 30,000 subscribers had been amassed by August 1999 when the company filed for bankruptcy.

That restructured company became profitable and cash flow positive, said Desch, who joined Iridium in 2006 to help shift it from a retail business model to a wholesale business model.

Iridium uses intersatellite links that allow the company???s spacecraft to communicate with each other above land, sea and air, including polar regions. Its applications include a niche in land-mobile services to provide one-third of its sales, since cellular networks only are accessible to about 15 percent of the Earth???s surface, while Iridium covers the other 85 percent.

Hilary Kramer, a Wall Street professional, recently recommended rival satellite operator Intelsat (NYSE: I) in her Turbo Trader advisory service. The recommendation is based ???purely??? on current momentum, she added.

???We wanted a 5G play and IRDM was interesting but has been stuck in a range since August,??? Kramer said. Iridium???s ???decent earnings??? failed to give its share price any real lift, so the odds are it will stay in the range for at least another few months, she added.

???We would need some outside development to push the stock through its known ceiling of $21 and another 5 percent in order to make it worth alerting people,??? Kramer said. ???If it clears $22 easily, we picked the wrong one.???

Intelsat, on the other hand, had a ???terrible quarter,??? dropping a harrowing 40 percent, but bounced back fast, Kramer said.

???As to which one is a better company, the people who prefer Iridium probably have the more compelling argument,??? Kramer said. ???But by the time their conviction starts paying off, Turbo Trader will have taken its easy money and run.???

For long-term investors, Iridium???s soon-to-be completed new constellation offers a potential cash flow bonanza due to drastically reduced capital expenditures in the years ahead that could lead to dividend payments for shareholders or attract attention from private equity firms that might eye the company as an acquisition candidate. Other satellite operators such as Intelsat previously had been purchased by private equity firms before returning to the public markets, so shareholders in Iridium may find more than one way to profit from investing in the company.

Paul Dykewicz, www.pauldykewicz.com, is an accomplished, award-winning journalist who has written for Dow Jones, the Wall Street Journal, Investor???s Business Daily, USA Today, the Journal of Commerce, Seeking Alpha, GuruFocus and other publications and websites. Paul is the editor of StockInvestor.com and DividendInvestor.com, a writer for both websites and a columnist. He further is the editorial director of Eagle Financial Publications in Washington, D.C., where he edits monthly investment newsletters, time-sensitive trading alerts, free e-letters and other investment reports. Paul previously served as business editor of Baltimore???s Daily Record newspaper. Paul also is the author of an inspirational book, ???Holy Smokes! Golden Guidance from Notre Dame???s Championship Chaplain,??? with a foreword by former national championship-winning football coach Lou Holtz. Follow Paul on Twitter at @PaulDykewicz.

GOP to Dems: Here, Take Our Wallets Too!