Connect with us
Paul Dykewicz explores Tesla's finances and recent news for the controversial company.

Teslaā??s financesĀ improved when the company produced its promised third-quarter profit, fueling a surge in its share price and spurring interest among its top shareholders to provide or to consider further investment in the Silicon Valley-based electric car company.

One of those shareholders is its billionaire CEO Elon Musk, who teamed up with his employees to prove doubters wrong on Oct. 24 when Tesla Inc. (NASDAQ:TSLA) reported its first profit in two years and only its third in the companyā??s 15-year history, after aggressively ramping up production of its Model 3 cars. Teslaā??s finances are far from settled but its $312 million in Q3 net income, based on Generally Accepted Accounting Principles (GAAP), sparkled compared to a loss of $717.5 millionĀ in Q3 last year and $619.4 million in Q2 this year.

Tesla officials described the third quarter as ā??historicā?¯ with its Model 3 becoming the best-selling car in America when measured in revenues and fifth based on the number of units sold. With average weekly Model 3 production through the third quarter, excluding planned shutdowns, of roughly 4,300 units per week, Tesla met its internal cost efficiency targets to reach a Model 3 gross margin of more than 20 percent, based on GAAP, topping the companyā??s previous guidance.

Plus, Teslaā??s finances gained an extra boost as its total cash rose by $731 million to produce free cash flow of $881 million, despite less than 10 percent of that amount coming from working capital items such as payables, receivables and inventory. Free cash flow gains reflect Teslaā??s operating cash flow, after subtracting its capital expenditures. 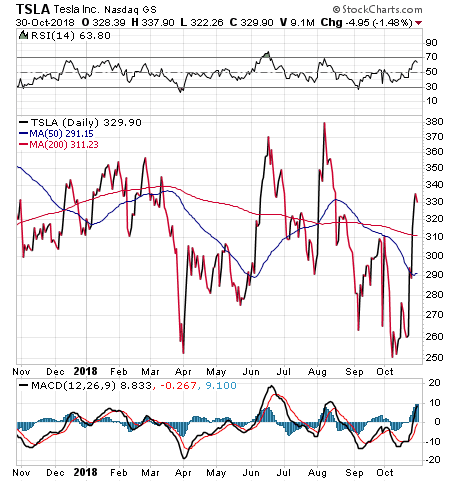 Musk recently spent an additional $10 million on Tesla to buy shares of its common stock on the open market, according to a new filing with the SEC. He previously agreed to buying $20 million in Tesla stock that likely will take place next week to fulfill a commitment disclosed in an Oct. 16 filing with the SEC in which he also accepted a settlement with the agency that was approved by the U.S. District Court for the Southern District of New York. That agreement resolved the SECā??s lawsuit against Musk for previously announcing plans to consider privatizing the company and tweeting ā??funding securedā?¯ without having anything finalized for his proposed $420 a share purchase price.Ā

The SEC forced Musk to give up his role as Teslaā??s chairman for the next three years and to pay $20 million fine that his company matched to compensate investors ā??harmedā?¯ by his tweet about having funding to take the company private. His latest stock purchases give him an estimated 20 percent ownership in the company.

Another major shareholder, Baillie Gifford, confirmed recently that it is willing to invest further in Tesla. The investment company, based in Scotland, is regarded as a long-term investor and previously has backed technology leaders on the ascent such as Netflix (NASDAQ:NFLX ) and Facebook (NASDAQ:FB).

Yet a third large Tesla shareholder, Baltimore-basedĀ T. Rowe Price Ā (NASDAQ:TROW), reported that it has boosted its stake in the car maker in a 13G filing with the SEC on Sept. 30. T. Rowe Price is a mutual fund company that has earned additional profits by investing in growth companies as part of its business strategy.

Teslaā??s finances also look stronger now after it announced its third-quarter car production hit 80,142 and its deliveries rose to 83,500 with an increased mix of ā??higher-priced models.ā?¯ The companyā??s delay in launching its lower-priced, $35,000 version of its Model 3 helped to boost the average pricing on the vehicles sold in the third quarter.

An auto industry analyst who ā??underweightsā?¯ Tesla shares but correctly predicted the company would turn a third-quarter profit is Barclaysā?? Brian A. Johnson. He affirmed his $210 a share price target for the electric auto maker in an Oct. 25 research note.

Teslaā??s earnings for the third quarter of $2.90 per share on a GAAP basis blew away the modest profit of $0.19 a share forecast by Barclays and a consensus $0.03 loss. Johnson is predicting Teslaā??s cash position will remain flat and include the repayment of $230 million in convertible debt. Teslaā??s increased Q3 production had led Barclays to boost its earnings estimate for the car company before the results were announced.

Teslaā??s Finances Improve But Should Be Assessed After Its 10Q is Filed with the SEC

Despite Teslaā??s better-than-expected third-quarter financial results, investors should be careful not to ā??pass any judgmentā?¯ until the company files its 10Q for that three-month period with the Securities and Exchange Commission (SEC), said Hilary Kramer, whose Value Authority investment advisory service has achieved double-digit percentage profits in its past six closed positions.

There were some ā??odditiesā?¯ about the third-quarterā??s gross profit per vehicle doubling sequentially from the second quarter, as well as an unusually large decline in administrative expenses despite increased sales, Kramer added.

However, Kramer previously indicated to me that Teslaā??s planned introduction of its Model 3 at a $35,000 price point next year could be ā??interesting.ā?¯ Kramer currently is not recommending Tesla or any auto manufacturer, after advising subscribers of her Turbo Trader and Inner Circle advisory services to sell Ford Motor Co. (NYSE:F). 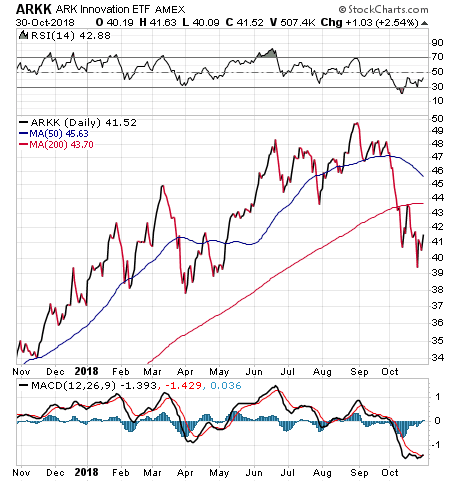 Forecasts & Strategies received attention for generating a 64.1 percent return for its clients who were advised to invest in Ford in December 2009 and hold through January 2011 as the manufacturer overcame financial troubles. No automobile companies are among Dr. Skousenā??s current recommendations.

As Citron Research, a former short seller in Tesla, announced last week prior to the car companyā??s earnings release, much of the media has focused on Muskā??s ā??eccentric, outlandish and, at times, offensive behavior,ā?¯ without reporting how he has disrupted the auto industry and turned his companyā??s electric cars into a mainstream product. With Teslaā??s Model 3 leading the mid-size luxury car class and its Model S becoming the largest seller in the large luxury car market, the company is gaining traction for the future.

Teslaā??s finances are far from adequate to take the company much beyond next year without a new capital infusion, but its third-quarter profit and production gains show it could be a force for other auto makers to face well into the future. If that happens, Musk may end up with another successful entrepreneurial venture, despite his recent public podcast in which he smoked marijuana, drank whiskey and talked about his hopes and dreams. Ā Ā

The True History of Millstone Babies