Connect with us
Paul Dykewicz shares news about Tesla's profitability promises and its outlook going forward.

Tesla???s profitability promises by its CEO Elon Musk are supposed to become reality when the company reports its third-quarter earnings in early November, but the quality and sustainability of any improved financial performance will be assessed closely by analysts and investors alike.

Bold and prone to make controversial tweets, Musk and his employees exerted great effort to fulfill Tesla???s profitability promises in the third quarter by stepping up production to 80,142 and deliveries to 83,500 with an emphasis on ???higher-priced models??? during that key three-month period. One auto industry analyst who rates the shares of Tesla Inc. (NASDAQ:TSLA) as overpriced, but is forecasting the company will turn a third-quarter profit, is Barclays??? Brian A. Johnson, whose $210 a share price target for the auto maker is well below its closing price of $276.59 on Oct. 16, when it jumped $17 a share, or 6.55 percent.

The stock rose after a judge approved a previously announced settlement between Musk and the Securities and Exchange Commission. 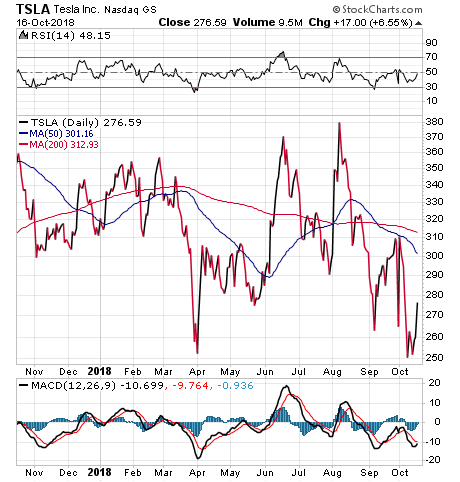 Tesla???s Profitability May Be Achieved with Increased Production and Deliveries

However, Tesla???s release of third-quarter production and delivery numbers that beat analysts??? consensus estimates were not accompanied by affirmation of its prior guidance to achieve profitability in both the third and fourth quarters.

???We would expect the stock to drift down as profit worries increase (and without the likely offset from Musk tweets), and then some rebound from likely bullish commentary on the earnings call,??? Johnson continued.

Barclays is predicting a 13-cent-per-share non-GAAP (Generally Accepted Accounting Principles) profit, but not a GAAP profit, Johnson wrote. He boosted his estimate based on the additional production and delivery volume.

Tesla???s Profitability Would Be Sweet Vindication for Musk

???Proving the naysayers wrong is perhaps more important to Elon Musk than anything else,??? said Jim Woods, editor of Successful Investing and Intelligence Report. ???But to do that on the profitability front for the September quarter, Tesla will have had to execute nearly flawlessly, and they need to come in with operating margins near the upper end of what the company can generate.???

???Tesla is scheduled to report earnings early next month, with Elon Musk committed to making the quarter a profitable one,??? said Hilary Kramer, whose Value Authority investment advisory service has notched double-digit-percentage profits in its last six closed trades. ???He may, in fact, achieve his goal. The question is whether it will be enough.

???The quality of earnings will get a lot of scrutiny, with cash flow and changes in working capital to be closely examined. If the shares are to have a sustained rally, Tesla must show it will be consistently cash flow positive. I still believe the company will be forced to tap the capital markets for cash at some point, which will pressure the shares.???

Kramer currently is not recommending Tesla or any automobile manufacturers, following her recent advice for subscribers of her Turbo Trader and Inner Circle advisory services to sell Ford Motor Co. (NYSE:F).

Tesla???s Profitability Goals are Not Preventing Its Stock from Falling

Dr. Mark Skousen, who leads the Forecasts & Strategies investment advisory service, has recommended the technology-focused ARK Innovation (NYSE:ARKK) fund profitably this year but set stop losses recently to protect the double-digit-percentage gains of his followers due to ARKK???s continued ownership of Tesla. He reported in his Forecasts & Strategies hotline on Oct. 15 that the first stop loss price of $42 was hit by ARKK. At that price, Skousen advised selling half of the ARKK shares that have been giving up their gains recently as Tesla fell.

???I???ve been concerned for some time about ARKK???s insistence on staying with Tesla,??? Skousen advised.

Skousen pointed out that Tesla???s stock has fallen more than 30 percent so far this year and ???could head lower.??? Tesla remains ARKK’s largest holding. Skousen has advocated for ARKK to drop Tesla from its portfolio and he recently opined that the electric car manufacturer???s debt level is ???insurmountable.??? 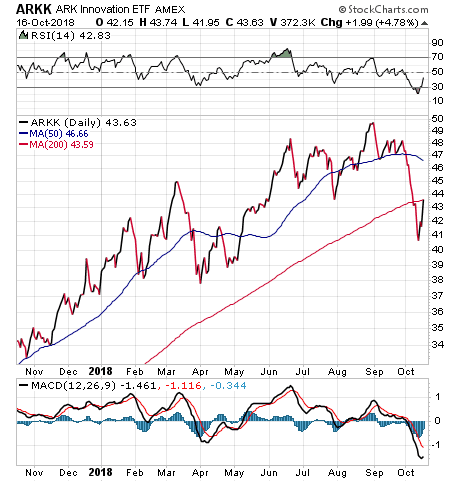 Forecasts & Strategies produced a 64.1 percent return for its clients who were advised to invest in Ford in December 2009 and hold through January 2011 as the vehicle manufacturer overcame financial ills. However, no automobile manufacturers are among its recommendations now.

Tesla???s Profitability Would Not Be Sustainable, Short Seller Insists

A high-profile short seller who is warning not to be wowed if Tesla somehow ekes out a third-quarter profit is David Einhorn, the president of Greenlight Capital. Einhorn provided his clients with a third-quarter update on Oct. 5 that included a scathing critique of Tesla, Musk and its board of directors. He described Musk???s behavior as erratic and slammed the company for ???deceptive??? actions that will ???catch up??? with it, just ???like Lehman??? Brothers prior to its bankruptcy 10 years ago.

Musk???s tweet about having ???funding secured??? to privatize Tesla was ???market manipulation??? aimed at hurting short sellers, Einhorn claimed. The SEC sued Musk Sept. 27 for ???false and misleading??? tweets, before agreeing to a settlement announced on Saturday, Sept. 29, when the CEO agreed to be barred from serving as the company???s chairman for the next three years. The agreement required him and Tesla each to pay a $20 million fine to compensate investors who had been ???harmed??? by his statements.

Musk received flak for a series of Aug. 7 tweets about taking Tesla private in a multi-billion-dollar transaction at $420 a share for a ???substantial premium??? of more than 20 percent above the company???s then-current share price. After the settlement, Musk sarcastically mocked the SEC with a tweet on Oct. 4 that called the agency the ???Shortseller Enrichment Commission,??? added facetiously the agency is doing “incredible work” and described his new nickname for it as ???so on point.???

Tesla???s Profitability Promises Could Not Keep Its Key Accountant from Leaving

The regulatory sanctions drew drama to the company but likely will not have much impact on Tesla???s profitability goals. However, Einhorn cited the short-term tenure of a Tesla chief accounting officer who resigned before preparing a single financial statement, even though he reportedly would have been paid $10 million in stock over four years.

???TSLA may be in accounting hell,??? wrote Einhorn, who boasted that his investment firm???s shorting of Tesla stock was its ???second biggest winner??? in the third quarter.

Einhorn reported that Greenlight Capital???s analysis of the Model 3???s cost is that it would take $41,000 to build each ???stripped-down version??? of the vehicle, even though ???Musk took deposits??? from hundreds of thousands of people for just $35,000 a car.

???He can???t make the car without losing too much money and he can???t bring himself to cancel the program and refund everyone???s deposits,??? Einhorn wrote.

Such criticism has frustrated Musk, who clearly would like nothing more than to report a profit in the third and fourth quarters this year to show short sellers and other critics that there is more to his leadership than what they may have observed in a recent public podcast in which he smoked a joint and drank whiskey with comedian Joe Rogan.

Tesla???s profitability promises likely will be fulfilled in the third quarter and give Musk a chance to tout his company???s achievement, ingenuity and loyal customers. The key question will be whether Tesla???s profitability can become a consistent achievement or remain a continuing soap opera that leaves investors looking for positive returns that have been elusive so far this year.

Shooting Yourself in the Foot with a Fake Arrow

Market Lives up to Its October Historical Profile