On Monday, September 24, I was invited to give the first Adam Smith lecture at the Panmure House, the last home lived in by the founder of modern economics. The house is located in Edinburgh, Scotland, and recently has been refurbished by the Edinburgh School of Business. 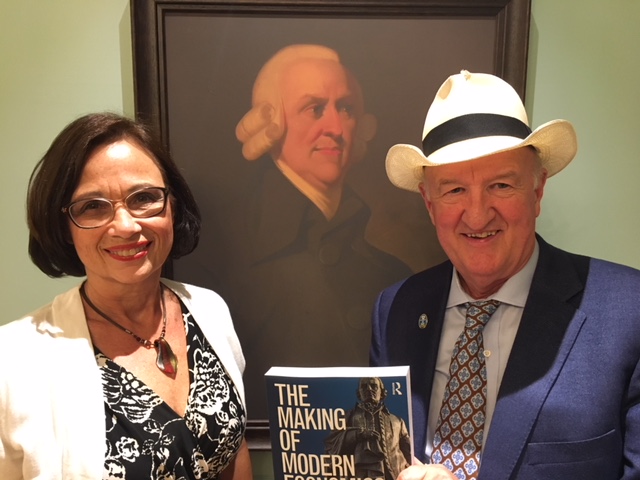 Jo Ann and Mark Skousen stand in front of the Adam Smith portrait at the Panmure House, Edinburgh, Scotland.

I was introduced by Professor Keith Lumsden, who has been spearheading the effort to create a new home for Adam Smith and his ideas.

My topic was my book ???The Making of Modern Economics,??? which now is in its 3rd edition and published by Routledge. Adam Smith is the hero of the book, and all economists are judged whether they support his ???system of natural liberty??? or oppose it.

The book is very popular and has been endorsed by Milton Friedman, Steve Forbes, John Mackey (who has read it three times) and many other economists and business leaders.

???Mark Skousen is unique with his fascination with history, with flesh and blood individuals. Read his concise and incisive sketches of numerous economists in ???The Making of Modern Economics.??? He brings history to life. People are interested in people. He recognizes that stories are highly instructive.??? — Steve Forbes

Click here to read the rest of the article, “Should We Honor Adam Smith or Karl Marx?”

Wake-up Call on the Sector Map