Connect with us
Paul Dykewicz shares the details on the latest advancements with Tesla production.

Tesla production, service and sales are regaining CEO Elon Musk???s focus in his twitter messages after his recent elevation of two key company???s leaders who accepted heightened responsibility for improving the performance of the electric car company???s operations as financial pressure to turn a profit mounts.

Tesla production has been a huge concern for Musk, his board of directors, employees and shareholders in the third quarter ending Sept. 30 that is supposed to usher in its best-ever output of new automobiles. Tesla Inc. (NASDAQ:TSLA) has been helped by Musk???s promotion and marketing of electric cars but it also has been hurt by his tweets, controversial comments and appearance in a recent podcast when he drank whiskey and smoked marijuana with comedian Joe Rogan.

A precursor to intensified focus on Tesla production, customer service and sales occurred when Musk boldly wrote in a Sept. 7 email to his employees that the company would have its ???most amazing quarter??? in its history by building and delivering more than twice as many cars as it did last quarter. Musk advised his employees to ???ignore??? the media and focus on creating the ???most mind-blowing growth??? in the history of the automotive industry.

Even the Ford Motor Co. (NYSE:F) Model T, which held the world record for the fastest growing car in history, did not grow as fast in sales or production as Tesla???s Model 3, Musk wrote in his email. He unabashedly promised Tesla would produce the ???most exciting??? new product lineup of any company in the world.

To that end, Musk touted Tesla???s Model Y, the Tesla (pickup) Truck, the Semi and the new Roadster. To help achieve the company???s goals, Musk promoted Jerome Guillen to President, Automotive, reporting directly to the company???s founder himself. In his new role, Guillen will oversee all automotive operations and program management, as well as coordinate the company???s extensive automotive supply chain.

Guillen received praise from Musk for ???major contributions??? and for acquiring deep knowledge of Tesla???s operations over the past eight years at the company, starting as the first Model S Program Manager to leading all vehicle programs, then adding all vehicle engineering and worldwide sales and service.

Recently, Guillen took a ???critical role??? in ramping Model 3 production, achieving what ???almost all thought was impossible,??? by creating an entire high-volume General Assembly line for Model 3 in a matter of weeks, Musk wrote. Before coming to Tesla, Guillen was responsible for creating and running the most successful semi-truck program in history at Daimler???s Freightliner division, Musk added.

Guillen???s influence may have led Musk to tweet about a new sales incentive program that offered to give Supercharging for life to new buyers of Tesla car who are referred by existing customers. The online sign-up incurred a glitch that spurred Musk to extend the offer through Sept. 18. Musk also vowed to bring the repair of damaged vehicles in-house to improve quality control with a goal of giving customers their vehicles with much reduced wait times.

???Tesla is bringing most collision repairs in-house, as outside firms take weeks to months for repairs, driving Tesla owners (and us) crazy,??? Musk tweeted on Sept. 16.

Another key promotion that could help Musk attain his ambitious auto production and sales goals is the naming of Chris Lister, who joined Tesla last year and helped solve its production problems at the Gigafactory and with lagging Model 3 production, as vice president of gigafactory operations to lead production and manufacturing engineering.

Tesla Production May Be Falling Short of 5,000 Cars a Week 3Q Goal

Even though Tesla achieved its ???target production cadence??? at the end of the second quarter, its weekly VIN registrations in the third quarter indicate the company is only ???sustainably??? producing a few hundred vehicles above a 4,000 a week rate for the Model 3, according to a recent research note by Goldman Sachs??? analyst David Tamberrino. He resumed coverage of the company after suspending it on Aug. 15 when his firm became a temporary ???financial advisor??? as Tesla explored going private. Tesla announced late on Friday, Aug. 24, that evaluated its situation and planned to stay public, despite Musk???s continuing frustration with short sellers who try to profit when the company???s stock price drops.

Goldman Sachs restored its ???sell??? recommendation and its price target for Tesla shares at $210, just as it had opined before suspending coverage of the stock. Musk???s focus on production, customer service and sales with his recent tweets coincided with a mild recovery in Tesla???s share price. 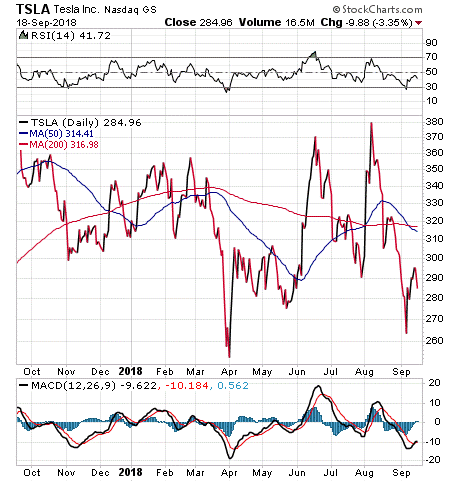 Public comments from Musk, including a controversial ???funding secured??? tweet on Aug. 7 about possibly taking the company private, give the company a ???not-ready-for-prime-time feel,??? said Hilary Kramer, a seasoned Wall Street professional who recently recommended the sale of Ford to subscribers of her Turbo Trader and Inner Circle advisory services.

Gain Diversified Exposure to Commodities with This Fund