Connect with us
Paul Dykewicz explores the upcoming challenges for Fiat Chrysler.

Fiat Chrysler Automobiles N.V. (NYSE:FCAU) is facing a huge challenge to sustain the remarkable resurgence it achieved under the leadership of its visionary former CEO Sergio Marchionne, 66, who died unexpectedly on July 25 after complications from shoulder surgery related to a serious illness.

Automobile industry analysts currently have ratings ranging from buy to sell on Fiat Chrysler???s shares, but its near-term outlook seems stable due to the existence of a 2019-22 strategic plan put in place prior to Marchionne???s health crisis. In addition, Fiat Chrysler had been planning on a leadership transition to coincide with Marchione???s planned retirement in April 2019 that would have elevated current key executives who now will be taking on increased responsibilities sooner than expected.

Another factor that enhances Fiat Chrysler???s financial future is its decision under Marchionne???s guidance to preserve precious capital by partnering with other companies on electric and self-driving vehicles. The latter strategy positions Fiat Chrysler as a potential merger candidate with another automobile manufacturer that may want to acquire brands that include Jeep, Ram trucks and Maserati sports cars that gained increased popularity under Marchionne???s tenure.

Mike Manley, who led the company???s profitable Jeep and Ram brands, was named CEO on Saturday, July 21, one day after company officials were told that Marchionne???s condition had deteriorated and that he would not be able to return to work. After the announcement of Manley???s ascension to the top post, Alfredo Altavilla, Fiat Chrysler???s chief operating offer, stepped down.

Fiat Chrysler, in its 2017 annual report, acknowledged that Marchionne was critical to the execution of its ???strategic direction??? and implementation of the company???s business plan. Marchionne had planned to continue as chairman and chief executive officer of the parent company???s Ferrari S.p.A. business unit until 2021, even after his scheduled retirement as CEO of Fiat Chrysler next April. Instead, seasoned executive Louis Camilleri became Ferrari???s new CEO on July 21 to replace Marchionne in that role. Camilleri, who had served as a Ferrari (NYSE:RACE) board member, also is the non-executive chairman of the Philip Morris International (NYSE:PM) board of directors.

Marchionne began as the chief executive officer of Fiat in 2004, turned around the business financially and orchestrated the $4.35 billion acquisition of Chrysler to form Fiat Chrysler in January 2014. Manley, who has headed the Jeep brand since June 2009 and the Ram brand since October 2016, also has experience in leading sales and product planning, as well as prior executive roles with regions around the world where Chrysler Fiat operates.

Now, Manley needs to take the company???s most visible role and show that he can execute an ambitious business plan that he helped Marchionne to develop. Max Warburton, an auto analyst with Sanford C. Bernstein, rates the auto company as ???market perform??? and wrote that 2019 should be a ???solid year??? for Fiat Chrysler before long-term challenges mount.

The Ram and Jeep brands led by Manley contributed 80 percent of Fiat Chrysler???s earnings before interest and taxes, so the executive has been instrumental in driving profitability at the company, noted Patrick Hummel, a UBS auto analyst. He predicts upside in the stock.

Evercore ISI analyst George Galliers did not foresee a change of CEO altering the course of Fiat Chrysler, according to a research note. Indeed, the Jeep brand Manley led will be an important part of achieving the company???s 2022 financial targets, he added. Galliers ranks the company as ???outperform.???

Analyst Phillippe Houchois of Jefferies calls Fiat Chrysler a ???buy??? and noted the management change could raise media speculation about the company???s potential to be involved in a future merger. To that end, Marchionne had said he expected further industry consolidation and he sought partners to preserve the company???s capital.

One analyst who recommended that investors ???sell??? Fiat Chrysler is Stephen Reitman, of Societe Generale, citing ???big challenges??? that include looming regulatory targets requiring billions of dollars in spending for Powertrain electrification in fiscal years 2018-22. Other risks are competitive threats, tightening credit, deteriorating credit quality and increased incentives to car buyers, he added.

The company???s stock has fallen in recent weeks, but the retreat may offer a buying opportunity to investors who still believe in the value of brands such as Jeep, Ram and Maserati, as well as the five-year strategic plan forged by Marchionne and Manley. Its 12-month stock chart shows the stock is trading well off its 2018 highs. 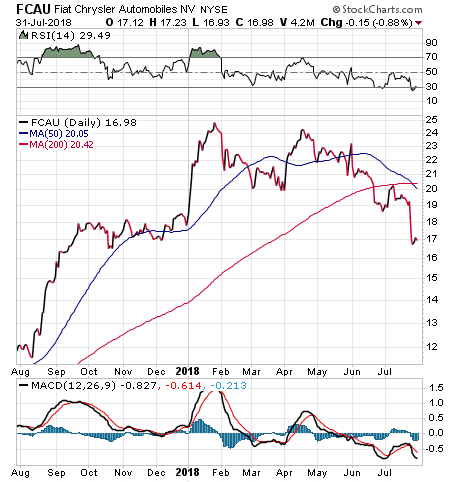 Ford is among companies that have had successful CEO transitions

The key to making that profitable call was to recognize the successful turnaround at Ford initiated by former Boeing Commercial Airplanes (NYSE: BA) CEO Alan Mulally, who arrived to lead the automaker in September 2006 when its debt fell to ???junk??? status and the company was heading toward a $12.6 billion loss for the year. Ford???s share price fell to a low of $1.01 in 2008 but avoided bankruptcy by following Mulally???s leadership style of delivering a ???compelling vision, a comprehensive plan, relentless implementation??? and using talented people working together to succeed.

???Smart investors look for bargain opportunities when companies have a major change in leadership,??? Skousen told me. ???Ford is one example back in 2009. Microsoft is another example when Satya Nadella took over at CEO in 2011 and the stock has more than doubled. General Electric is now going through the same transition with new CEO and turnaround specialist John Flannery. No doubt the same is happening now at Fiat Chrysler. Not every change in leadership works out — for example, Carly Fiorina at Hewlett Packard in 1999 — but many do.???

Fiat Chrysler should be helped by the economy, particularly in the United States, which reported a 4.1 percent jump in gross domestic product during the second quarter of 2018, compared to the same quarter of 2017. Not only did second-quarter 2018 GDP cruise along at a 4.1% rate of growth but third-quarter GDP and corporate earnings should be ???just as robust,??? predicted Bryan Perry in the July 31 update of his Cash Machine advisory service. It that momentum continues,  a trade war and toxic politics will only act as ???speed bumps,??? he added.

The U.S. economy is performing well with a low unemployment rate and sustained consumer confidence, said Sanjay Sakhrani, an analyst with Keefe, Bruyette & Woods, a boutique investment firm that specializes in finance and banking. U.S. retail spending is strong, he added.

Fiat Chrysler is on course to succeed financially in the quarters ahead. The operational plan put in place by Marchionne before his death has seasoned company executive Manley steering the automaker, and analysts who know him expect the new CEO to show a steady approach in helping the organization compete in an industry that will undergo dramatic change in the years ahead.