Last week, Zacks highlighted its Bull of the Day and Bear of the Day.

The Bull of the Day is a technology stock with a bright future: Graphics chipmakerÂ NVIDIA Corporation (Nasdaq:NVDA), based in Silicon Valley. The stock has gone from $15 to $236 a share since November 2011.

Maybe we should say these two stocks represent the Bull and the Bear of the Decade.

Technology stocks have soared since the financial crisis of 2008. While volatile, they continue to do well. For over a decade, three giant tech companies — Microsoft, Cisco Systems and Intel — went nowhere, but suddenly have taken off in the past several years.

There has been no such luck with gold stocks. The miners have not only steadily declined since late 2011, but they also significantly have underperformed gold itself. Typically, gold and mining stocks move together, but since the financial crisis of 2008, they have moved dramatically in opposite directions. Gold itself has held up well, but the mining stocks have collapsed. Thereâ??s no other word for it.

And that brings me to the two upcoming investment conferences here in July — the differences are like night and day.

I am a firm believer in attending investment conferences and meeting firsthand the financial advisors and money managers who you can trust. But conferences can be expensive, especially if you invest based on the advice of a false prophet.

Several years ago, I spoke at a â??gold bugâ?ť convention in New Orleans, and met several professionals (accountants, doctors and lawyers) who made the mistake of selling their traditional stocks and buying penny mining stocks. They were wiped out, losing over 70% of their money. Donâ??t let it happen to you!

A group of doom-and-gloomers this month are aggressively encouraging investors to come to Canada for a â??bearâ?ť conference. Speakers include well-known bears Jim Rickards, David Stockman and James Grant, who aim to scare the living daylights out of you and will make investing in penny mining stocks appear as the dream of a life time. Looking over the list of speakers, Iâ??d guess that 90% are gold bugs who have a vested interest in resource stocks. They are even promoting the conference as a way to make 100 times your money.

Gold mining stocksÂ may have their day in the sun. But when? Recently, gold and silver have been in a slow downward trend. With interest rates rising, mining stocks are dead in the water. Nobody knows how long this is going to last.

Gold has fallen so far, so fast, that it may be in for a short-term rally, but there’s no evidence that it is the beginning of a bull market.

Investors lured in by fear-and-greed promotions should leave their wallets and checkbooks at home. Exhibitors always tell a good story, and it is easy to get caught up in gold fever.

Hereâ??s a Better Way to Spend Your Summer Dollars

Meanwhile, my publisher, Eagle Financial Publications, is putting on a â??bullâ?ť investment conference called the Fast Money Summit, a three-day financial conference that is part of FreedomFest,Â July 11-14, at the Paris Resort in Las Vegas. At our financial conference, we make a point of bringing together both bulls and bears, and let the attendees make up their mind. Sure, we have several famous bears speaking such asÂ Doug Casey,Â Peter SchiffÂ andÂ Robert Kiyosaki.

We even have a Bull vs. Bear Debate between bulls Alex Green and Keith Fitz-Gerald and bears Doug Casey and Jim Rogers, seeking to answer the all-important-question: â??What am I missing when my prediction fails to come true, or my favorite stock declines?â?ť

Plus, the ultimate â??Testy Debate on Tesla,â?ť the pros and cons ofÂ Elon Muskâ??sÂ ability to make a success out of Tesla Inc. (NASDAQ:TSLA).

We also have a session on â??Best Ways to Beat the Market,â?ť led by investment gurus who have actually done it over the long term.

For details on the Fast Money Summit, go toÂ https://www.markskousen.com/landing-pages/fast-money-summit/.

(As you can see, FreedomFest is more than an investment conference.)

Contrarians may be tempted to go to the mining conference, since gold has been in a bear market for some time. But remember the words of Humphrey Bancroft Neill, the father of contrarian investing: â??The public is right during the trends, but wrong at both ends.â?ť Is this the bottom for gold and mining stocks?

At my conference, you get to hear both sides. We even have a session on gold mining, but we also have other sessions on technology, energy, finances and real estate. We report, you choose.

The Fast Money Summit at FreedomFest starts next week. Thereâ??s still room to join us. Go toÂ www.freedomfest.comÂ or see details below.

Senator Mike Lee Is on Short List for the U.S. Supreme Court

This just in: Our FreedomFest keynote speaker,Â Senator Mike Lee,Â is on the short list to become the next Supreme Court justice. He will tell us all about it onÂ Saturday, July 14, in the Rivoli ballroom, Paris Resort, Las Vegas. 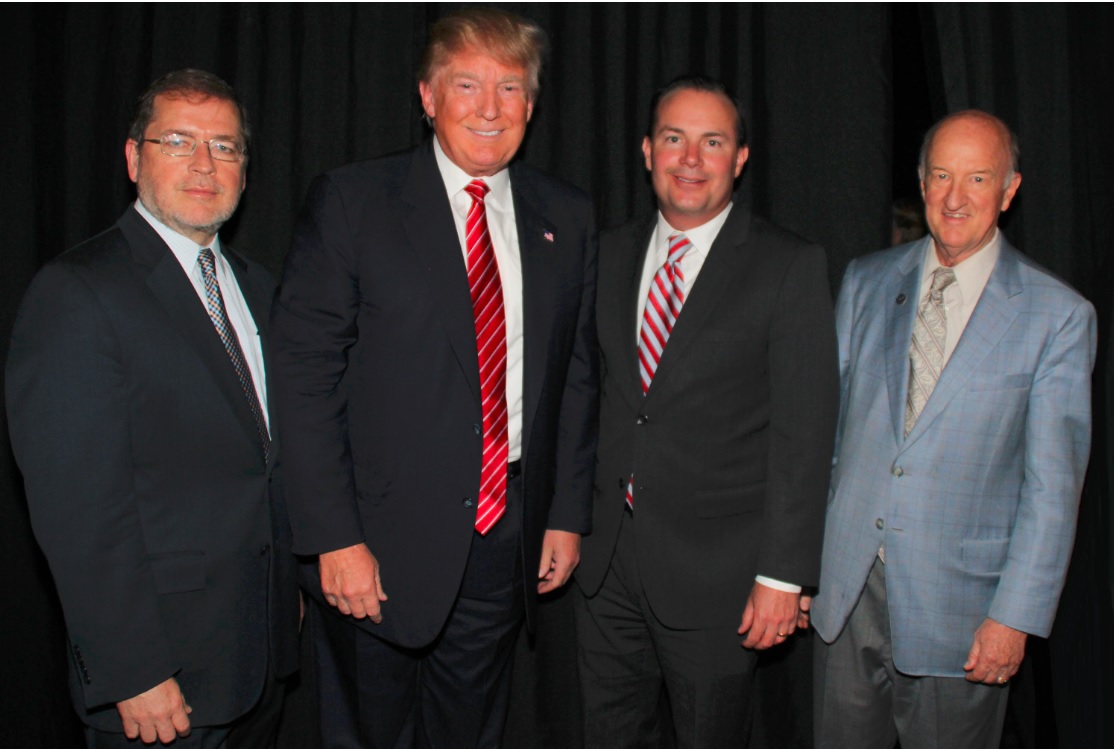 New Addition!Â We have decided to do a big debate pittingÂ NewsmaxÂ against theÂ New York Times! This debate will take placeÂ on ThursdayÂ evening,Â July 12, starting atÂ 6:10 p.m. in the Rivoli ballroom:Â Wayne Allyn RootÂ (Newsmax radio/tv host) will take onÂ Ross DouthatÂ (New York TimesÂ conservative columnist).Â The topic will be explosive:Â “Is Trump Another Reagan — or a Mussolini?”Â It could be our most controversial Trump debate yet.

ACT NOW! FreedomFest and our Fast Money Summit are only 7 days away. This is your last chance to sign up and take advantage of the $100 discount. Use code EAGLE100 and get $100 off the registration fee. Go toÂ https://www.freedomfest.com/register-now/Â to register, or CALL our toll-free number 1-855-850-3733, ext. 202.

For the First Time, My Personal Schedule Posted!

Personal Update: The first thing I do when I arrive in Vegas is get the printed program and circle all the breakout sessions I want to attend. You should do the same. You can get started now by going online to â??agendaâ?ť atÂ https://www.freedomfest.com/agenda-3/Â and see the entire up-to-date program for FreedomFest, the Fast Money Summit and the Anthem Film Festival.

For the first time, Iâ??ve posted my personal schedule at this yearâ??s FreedomFest. Come join me.Â Click hereÂ to learn about my favorite FreedomFest sessions to attend.

Meanwhile, hope you all have a gloriousÂ 4th of July. Remember this warning fromÂ Ben Franklin: â??We must all hang together, or we shall surely all hang separately.â?ť I say, hang out in Vegas!Â

â??I agree with [Trump] completely.Â The U.S. has been taken for a ride — letâ??s face it — over the last 20 or 30 years. Itâ??s time to start saying, â??Look, there has to be some reciprocity between these two countries, because itâ??s just crazy to have this kind of deficit.

â??I think at the end of the day, the U.S. is going to win this one, because the U.S. is the biggest importer in the world, and China needs the U.S.Â Winning means getting some concessions and a reduction in the trade deficit.â?ť

We shall see, but meanwhile, U.S. industry and farming are getting fed up with Trumpâ??s tariffs, which have caused serious retaliation by China and European nations.

General Motors (NYSE:GM) announced that the import duties on American cars exported to Canada and elsewhere will result in layoffs and â??a smaller G.M.â?ť

Harley-Davidson (NYSE:HOG) announced it would start producing some of its motorcycles in Europe to avoid new high European import duties.

The steel and aluminum import fees imposed by Trump in the name of â??national securityâ?ť (what a farce and misuse of executive authority) have actually raised prices for U.S. companies that use imported steel and aluminum.

Farmers say that Chinaâ??s new tariffs on soybeans are hurting their business.

Ben Franklin said it best over 200 years ago: â??It would be better if government meddled no further with trade and let it take its course. Most of the statutes, acts, edicts, arets and placards of Parliaments, princes and states, for regulating, directing, and restraining of trade have either political blunders or jobs obtained by artful men for private advantage under the pretence of public good.â?ť