The U.S. dollar has jumped compared to other currencies around the world in recent weeks and may tempt investors to buy shares in an exchange-traded fund (ETF) that tracks the greenback.

The PowerShares DB US Dollar Index Bullish Fund (NYSE:UUP) is an ETF that allows investors to gain exposure to the U.S. dollar without engaging directly in foreign exchange accounts. A key question is whether the recent rise in the value of the U.S. dollar is sustainable as a long-term trend or if it is a short-term opportunity that may be best suited for traders seeking to seize quick profits.

An improving U.S. economy that started last year, compared to recent slowing of foreign economies, adds further lift to the dollar. The dollar also climbed when the U.S. unemployment rate fell to a nearly 18-year low during April, as U.S. job growth totaled 164,000 new positions and the unemployment rate slid to 3.9 percent for the first time since December 2000.

In comparison, the U.S. unemployment rate dipped from 4.1 percent, where it had leveled off for the previous six months. Although U.S. economic growth eased slightly to 2.3 percent in the first quarter of 2018, it held up reasonably well amid talk of imposing trade tariffs by President Trump and foreign leaders. Forecasters expect annualized U.S. economic growth to approach 3 percent for the rest of 2018, up slightly from the 2.9 percent annualized rise in the fourth quarter of 2017.

Investors who are concerned about volatility in the stock market but want to profit from the current outlook may see merit in the PowerShares DB US Dollar Index Bullish Fund. The ETF seeks to track changes in the level of the Deutsche Bank Long USD Currency Portfolio Index — Excess Return, plus interest income from the fundâ??s holdings of U.S. Treasury securities and money market incomes, minus expenses.

The fund measures the dollarâ??s strength against six other currencies: the European Unionâ??s euro, the Japanese yen, the British pound, the Canadian dollar, the Swedish krona and the Swiss franc. The dollar has been rising against the euro in recent weeks. 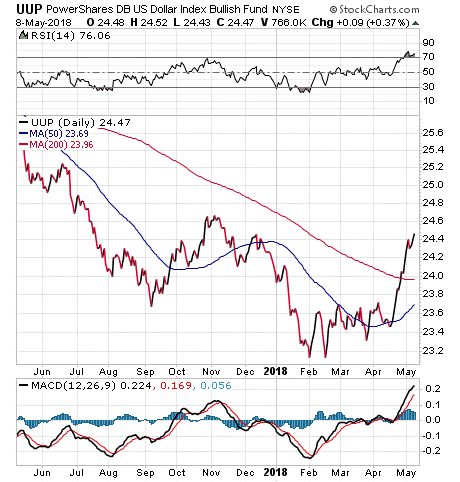 One of Wall Streetâ??s most ardent U.S. dollar bulls is David Woo, head of global interest rates and currencies research at Bank of America. Even more significant than the dollarâ??s recent rally is that interest-rate-insensitive foreign exchange flows are slowing or even ending, he said.

-Continued soft euro zone economic data in April supports a theory that the â??euro is too strong,â?ť not that the euroâ??s weakening is due to weather;

-An upturn in U.S. business investment is paving the way for heightened productivity and wage growth;

-Progress in negotiations to revamp the North American Free Trade Agreement (NAFTA) should increase U.S. leverage in its trade talks with China;

-Corporate America may use the first-quarter earnings season to repatriate offshore cash;

-Chinaâ??s deleveraging will limit the ability of the Peopleâ??s Bank of China (PBOC) to match further Fed rate hikes;

-The fiscal risk premium in the U.S. dollar already is very high; and

-Divergence between momentum and positioning are turning the tables on overextended â??longâ?ť investments in the euro.

Rich Checkan, president and chief operating officer of Asset Strategies International, a full-service tangible asset dealer in Rockville, Maryland, said the dollar is showing near-term strength, even if the long-term outlook is not as rosy.

â??We continue to believe the U.S. dollar has entered into a longer-term bear trend,â?ť Checkan said.Â â??The greenback was down 13 percent last year and is down roughly 1 percent this yearâ?¦ although it has recently rallied… But, considering we believe we are in a longer-term bear trend, this is strength we would consider using to your advantage while it lasts…â?ť

â??I expect any reaction would be short-term and economic fundamentals would take over,â?ť said Bob Carlson, the editor of Retirement Watch.

However, ordinary Iranians were trying to buy U.S. dollars last month when the nationâ??s own currency hit an all-time low amid political uncertainty in the country and its weak domestic economy. In the face of international conflict, the U.S. dollar often becomes a safe currency for people to buy.

Jim Woods, who writes the Successful Investing and Intelligence Report advisory services, monitors the currency funds and provides his subscribers with weekly updates and a recommended exit price for each position. Woods is not a current buyer of the U.S. dollar but he confirmed he is tracking it.

Currency investments are a zero-sum game in which one form of money rises at the expense of another. For investors who believe in the Wall Street adage of â??sell in May and go away,â?ť an investment in a U.S. dollar fund could offer a reasonable way to try to profit from the currencyâ??s uptrend and sidestep a possible summertime slippage in stocks.

Paul DykewiczÂ is an accomplished, award-winning journalist who has written for Dow Jones, theÂ Wall Street Journal, Investorâ??s Business Daily,Â USA Today,Â the Journal of Commerce, Seeking Alpha, GuruFocus and other publications and websites. Paul is the editor of StockInvestor.com andÂ DividendInvestor.com, a writer for both websites and a columnist. He further is the editorial director of Eagle Financial Publications in Washington, D.C., where he edits monthly investment newsletters, time-sensitive trading alerts, free e-letters and other investment reports.Â Paul previously served as business editor of a daily newspaper in Baltimore. Paul also is the author of an inspirational book, â??Holy Smokes! Golden Guidance from Notre Dameâ??s Championship Chaplain,â?ť with a foreword by former national championship-winning football coach Lou Holtz.