???Don???t be that Fool. Bitcoin is a bubble and it will end badly.???  — Gary Smith, Professor of Economics, Pomona College

Alabama voters this week rejected the Republican candidate for U.S. Senate, Roy Moore, and saved themselves an embarrassment. Even though that choice will make it more difficult to pass legislation, voters made the right decision.

The results were well received on Wall Street, which remains in an ebullient mood as the Santa Claus rally continues in expectation that President Trump will sign tax cut legislation by Christmas time.

My wife and I met this week with Steve Forbes for an annual meeting to discuss current events and next year???s FreedomFest (see photo). Forbes told us he was disappointed in the tax bill, which he said makes a mockery of tax reform or simplification. It will add thousands of new pages to the tax code and enrich accountants and tax attorneys. Sadly, he???s right. Congress should have just focused on cutting the corporate tax rate to 20% and left personal tax returns alone. 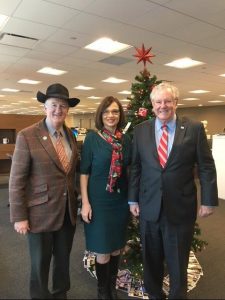 Of course, almost everyone on Wall Street seems to be talking about Bitcoin and cryptocurrencies, as well as the blockchain technology behind them. Bitcoin futures began trading on Dec. 11 and moved sharply higher.

The Most Disrespected Bull Market in History

Last Thursday, Dec. 7 (Pearl Harbor Day), I was on CNBC with Rick Santelli talking about the Trump rally, ???the mother of all bull markets,??? and Bitcoin. Watch the three-minute interview here.

When I appeared on CNBC with Rick Santelli, I quoted two famous lines that are applicable in current markets. The first is from Sir John Templeton: ???Bull markets are born on pessimism, grow on skepticism, mature on optimism and die on euphoria.??? I think we???re now between stages #2 (skepticism) and #3 (optimism), so we have more profits ahead.

The second quote is ???Nobody is more bearish than a sold-out bull.??? You can apply that to anyone who has sold his position and moved into cash, or missed out on a bull market opportunity like Bitcoin. I personally have profited handsomely from several Bitcoin-type positions, but they are all short term. You never know when this crazy market is going to head south.

Many academics are down on Bitcoin, suggesting it???s just another ???tulip mania.??? I prefer to compare it to the irrational exuberance of the dotcom craze of the late 1990s. The internet was real, but investors got carried away investing in penny stocks that made no business sense.

But the blockchain technology that cryptocurrencies use is a real revolution. Patrick Byrne, CEO of Overstock.com, Inc. (OSTK), is a visionary business leader who recognized years ago the revolutionary nature of Bitcoin and blockchain technology. Overstock gained notoriety as one of the first major retailers to accept Bitcoin as payment back in January 2014. Initially, the company sold its crypto sales into dollars, but it now holds 50% of its cryptocurrency transactions in Bitcoin and other digital currencies. Assets are climbing! Byrne said he firmly believes that Bitcoin and blockchain are ???going to be more revolutionary than the internet.??? 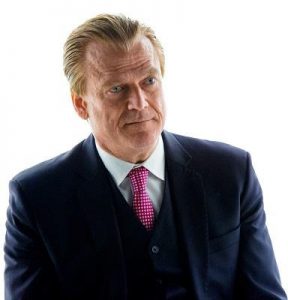 No wonder its stock is soaring recently. The e-commerce company still has negative earnings and doesn???t pay a dividend, so it???s more suitable for my trading services.

But I do have good news: Patrick Byrne has agreed to be a keynote speaker at next year???s FreedomFest, July 11-14, 2018, at the Paris Resort, Las Vegas. His topic: ???Bitcoin, Crypto Currencies, and the Blockchain: The New Financial Revolution the World Desperately Needs.??? I wrote about the breakthrough technology of the blockchain in the Nov. 30 Skousen CAF??. Read it here.

We are ready to take early-bird registrations at https://www.freedomfest.com/register-now/. Only $495 per person/$795 per couple. That???s $200 off the retail rate. The early-bird discount ends January 17, 2018. Register online or call toll-free 1-855-850-3733, ext. 202. Both our co-ambassadors Steve Forbes and John Mackey (CEO, Whole Foods Market) will be there next year, and attend the entire conference. Our theme is ???Where is the Voice of Reason???? We expect a big crowd, as we will be celebrating Reason magazine???s 50th anniversary next year.

Time Remains to Order by Christmas — and Get Half off!

If you buy “The Maxims of Wall Street” on Amazon, the price is $24.95. I???m offering it for only $20 for the first copy, and all additional copies are only $10 each. A half-off special. Or buy a whole box (32 copies) and pay only $300. I pay postage and autograph each copy. It is the perfect gift for the holidays to friends, family and clients.

To order, call Harold at Ensign Publishing, toll-free: 1-866-254-2057, or go to www.miracleofamerica.com. (Note: Add $15 if you are ordering from outside the United States. All copies are sent via airmail.)

You Nailed It! The Smallest Man in Baseball Named Sportsman of the Year

The latest issue of Sports Illustrated has on the cover Houston Astro Jose Altuve and the Houston Texans??? J. J. Watt as Sportspersons of the Year. I was especially touched by the story of Jose Altuve, the Venezuelan who ended up on the Houston Astros??? World Series championship team, won the American League Most Valuable Player Award and is only 5′ 6″ tall, the smallest man in baseball. 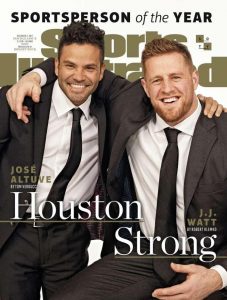 Even though I’m a lifelong fan of the New York Yankees, it seemed appropriate for the Houston Astros to win it all in the World Series, given the trials that city has suffered due to Hurricane Harvey. It reminded me of the time the Yankees went to the World Series right after 9/11 in 2001.

Sports Illustrated could have chosen Colin Kaepernick, who protested discrimination against blacks by refusing to stand for the National Anthem. Happily, Sports Illustrated decided to go for a positive story that brings Americans together, something that is desperately needed in this country right now.

Orlando MoneyShow, February 8-11, 2018: I???m delighted to return to the Orlando MoneyShow, where I will be giving a new presentation on ???ETFs vs. Mutual Funds, Why You Need Both! (Plus, My Five Favorites).??? I???ll also be doing an encore of the ???great debate??? with Mike Turner on ???The Economics Professor vs. the Mathematician: Buy-and-Hold vs. Market Timing.??? Plus, I am on a luncheon panel to pick the next big winners with Bart DiLiddo, John Dobosz, Cody Willard and Kelley Wright. To sign up for your complimentary tickets, go to Skousen.OrlandoMoneyShow.com.