Connect with us
Economist Dr. Mark Skousen explores the treatment of stocks as gambles and discusses the latest edition of his textbook, "Economic Logic."

???Although it???s easy to forget sometimes, a share of stock is not a lottery ticket. It???s part ownership in a company.???

Every other year, I teach a course in ???financial economics??? at Chapman University. I???ll be teaching again in the spring.

In the class, I hold up a stock certificate in one hand and a lottery ticket in the other, and ask students, ???Are these two pieces of paper different or the same???? Then we have a lengthy debate on whether Wall Street is just another Las Vegas.

Some students argue that investing in the stock market is nothing more than a gamble just like blackjack or craps. If you win in stocks, it???s more luck than skill. They point out that most successful speculators on Wall Street are also good at playing games such as poker or bridge.

I summarize the lessons I???ve learned over my 35 years on Wall Street in chapter 13 (running 35 pages) of my textbook, ???Economic Logic,??? now in its 5th edition. 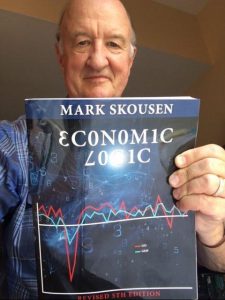 Your editor holds his copy of ???Economic Logic.???

???Economic Logic??? is different from any other textbook out there. Mine is written by an ???applied??? economist, not an academic. I???ve always had one foot in the real world and one foot in the academic world. I love to teach students, but can only teach one class a semester. The rest of the time, I???m engaged in the real-world business of investing.

The Only Textbook that Incorporates Profit & Loss Income Statement and GO!

???Economic Logic??? is also the only textbook to fully incorporate gross output (GO), the Austrian-style measure of spending at all stages of production as the top line of national income accounting. Gross domestic product (GDP), which measures final spending only, is the bottom line.

In ???Economic Logic,??? GO is incorporated as a more comprehensive measure of the economy, serves as a valuable tool in analyzing the business cycle and restores the business sector as the major driver of the economy. It deserves to be updated on a quarterly basis along with GDP.

CAF?? stands for Center for Austrian Finance and Economics. If you want to understand how the economy really works, and applying sound Austrian-style economics in the world of finance, ???Economic Logic??? is the book for you.

Based on my popular course taught at Chapman University, Columbia Business School and other institutions, I integrate the Austrian-style structure of production model in both the micro and macro sections.

My textbook has been adopted at a growing number of colleges and universities, including Northwood University, Universidad Francisco Marroquin (UFM), Mercy College, Santa Clara University, Grantham University, Walsh College, University of Detroit-Mercy, Metropolitan State University (Denver) and Chapman University. Many parents also use it for homeschooling.

Added Highlights to the 5th Edition

In addition, here???s new material found in the 5th edition:

— Updated discussions on job creation, the labor force participation rate and the recovery after the Great Recession are offered in detail in chapters 10 and 25. Chapter 10 also addresses the unemployment issues in Europe and America and the prospects for renewed growth under a Trump administration.

— Minimum wage debate: A new way to analyze the three effects of a minimum wage increase, plus natural market ways to raise wages without resorting to government mandates. See chapter 10.

— Recent government regulations (Sarbanes-Oxley, Dodd-Frank, the Securities and Exchange Commission) following the 2008 financial crisis and the Bernie Madoff fraud are discussed in chapter 13.

— The consumption and savings rate patterns of China are compared to those of the United States in chapter 17. This comparison helps to determine what drives the economy, consumer spending or savings/investment?

— Major chapters on money, the gold standard, and central banking. See chapters 18 and 19. The end of the Federal Reserve’s “easy money” policies of ZIRP (zero interest rate policy) and Quantitative Easing (QE) in 2017 are debated in chapter 19.

— The ongoing debate on “austerity” vs. “stimulus” has been added to chapter 22.

— What factor is more significant in the business cycle, Keynesian lack of ???aggregate demand??? or Hayekian ???malinvestment???? See chapter 25.

— The rise of state capitalism in China is highlighted in chapter 27.

— The international gold standard, the defects of central banking, and the Mises/Hayek theory of the business cycle.

— A full critique of the Keynesian Aggregate Supply and Demand (AS-AD) model, and a revolutionary Austrian alternative (chapters 22 and 25). Plus, a critique of Marxism and socialist central planning (chapter 27).

— Leaders of all schools, including Austrian, Keynesian, Marxist, Chicago and Public Choice.

— “Economic Logic??? is dedicated to Friedrich Hayek and Milton Friedman, thus drawing from the best of the Austrian and Chicago traditions.

— A glossary of terms has been added to this edition.

What Economists Are Saying

???Eureka! Skousen has done the impossible. Students love it! I will never go back to another textbook.??? — Professor Harry Veryser, University of Detroit-Mercy

???An excellent balance of theory and the real world that no other text has achieved.??? — Charles Baird, CalState East Bay

???Better than any book out there! Skousen presents real business economics in a clear, provocative and logical fashion.??? — Ian MacKechnie, University of Wales

???My college econ classes, filled with perplexing theories like the paradox of thrift, GDP and Keynesian fiscal policy, were completely refuted by this excellent free-market textbook. Students, if your professors don???t use this text, get it for yourself so you can really understand the concepts of sound economics.??? — Amazon review

This new 5th edition (2017) of ???Economic Logic??? is a 714-page quality paperback published by Capital Press/Regnery. It retails for $79.95, but is available to my subscribers for half off — only $39.95. (International orders require an additional mailing charge — please call for a quote) by calling Harold at Ensign Publishing toll-free 1-866-254-2057. Or go to www.miracleofamerica.com.

You Blew It! Three UCLA Players Learn a Hard Lesson

The big news in sports this week was the surprise release of three freshman basketball players from UCLA who were caught shoplifting in China and were probably going to be sentenced to 10 years in prison.

Until their suspension is lifted, the three players will not travel with UCLA to road games or suit up for home games. They also won???t be welcome at practices, workouts and team meetings, though Alford cited the possibility they could eventually earn back that privilege by cooperating with the university review of the international incident and performing well in their courses.

American tourists, whether students or not, need to remember that there???s no ???bill of rights??? in the Chinese Constitution like there is in the United States that promises a speedy trial and no ???cruel and unusual punishment.??? Even those rights for fair and fast judgment in the United States are not provided in every instance.

Americans need to know that the laws are often very different in foreign countries, especially Communist countries such as China and North Korea. You need to be on your best behavior and avoid doing something stupid.

An American college student made this mistake a few years ago by trying to steal a political propaganda poster in North Korea and was sentenced to 15 years of prison and hard labor. The student, Otto F. Warmbier, was so badly treated that, when he was released and flown home after 17 months of captivity, doctors from the University of Cincinnati Medical Center said he suffered from injuries related to cardiopulmonary arrest and was in a state of unresponsive wakefulness. Warmbier had been in a coma for more than a year in North Korea and the scans at the University of Cincinnati Medical Center showed extensive loss in all regions of his brain. He died just six days after landing in the United States.

In another case, a former football player, Wendell Brown, 30, of Detroit, was accused of hitting someone in a bar in China and is now languishing in a Chinese prison. Brown, who once played for the Winnipeg Blue Bombers of the Canadian Football League, claimed he simply raised his arms to defend himself after others at the bar had started to throw beer bottles at him after he declined to sit with them for a drink.

With no discovery process about the evidence against him and laws that bear little resemblance to those in the United States, Brown has spent the past 14 months in a Chinese jail. His mother said she would thank President Trump repeatedly if he could intervene to help her son.