The Federal Reserve did what I, and nearly every Wall Street soothsayer, expected today, and that is raise the benchmark federal funds rate by a quarter percentage point to a range between 0.75% and 1%. The central bank also announced plans to continue raising rates ā??graduallyā?¯ if the economy continues to perform in line with the U.S. central bank forecasts.

Perhaps most importantly, Fed Chair Janet Yellen and her colleagues expect to raise rates two more times before the end of the year. The prognosis for three total rate hikes in 2017 (the first being today) is what Wall Street was betting on.

If the Fed had indicated that there would be four rate hikes in 2017, that would have been taken as very ā??hawkishā?¯ and markets would not have likely reacted with a big spike of 0.85% in the SPDR S&P 500 ETF (SPY) some 45 minutes after the Fed announcement. 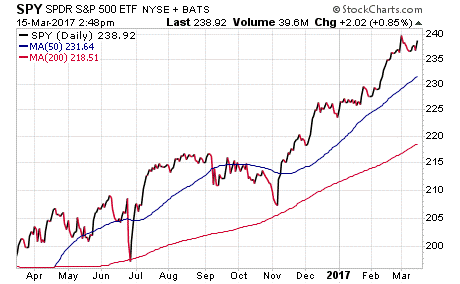 Another important outcome of todayā??s Fed decision was that the central bank kept its projections for three quarter-point rate hikes in 2018. The reason that matters is that markets now can plan on the cost of capital rising at a steady, but also a gradual (thereā??s that word again) pace for the next couple of years.

Think about this for a moment. It has been about a decade since the market had to worry about the pace of interest rate hikes.

And while interest rates still are very low by historical standards, the end of ā??ZIRP,ā?¯ or the zero interest-rate policy, that dominated the financial landscape since 2009 now is definitively over.

This change in Fed zeitgeist is going to have widespread, long-term implications for stocks, bonds, the dollar, commodities, mortgage rates, the real estate market, etc. Just about everything, economically, is affected by interest rates. As such, investors are going to have to roll with the changes wrought by the end of the easy-money era.

The question for you isā?¦ is your money ready to adapt to that change?

Subscribers to my Successful ETF Investing advisory service have already been positioning their money for the new reality of higher interest rates.

If youā??d like to find out how we are doing that in both our income and growth portfolios, then I invite you to check out Successful ETF Investing, today!

This weekā??s ETF Talk will be the first of five articles aimed at highlighting exchange-traded funds (ETFs) that invest in European companies. While these funds have different strategies, the one we will focus on today is the broadest: The Vanguard FTSE Europe ETF (VGK).

This fund invests in large companies in Europeā??s most developed and significant economies. This focus means that a majority of Europeā??s westernmost countries are well represented by the fund, along with countries located in the Scandinavian region of Europe.

VGK holds a selection of the most well-known, European-based companies you can find, and offers relatively low-risk exposure to big names in the region. For investors seeking a simple way to invest in Europe, this fund may be an attractive option.

VGK has a very low expense ratio, which currently clocks in at just 0.10%. Because many large European companies pay substantial dividends to their shareholders, VGK sports a 3.42% yield and makes dividend payments every quarter. Net assets total $10.9 billion.

As the chart here demonstrates, this fund had mixed performance over much of the last 12 months. However, international equities are on the rise again, and VGK has done better in the last couple of months as a result. VGK is up 5.38% since January. 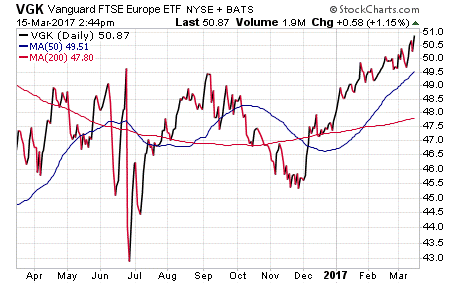 Due to its weighting strategy, VGKā??s funds are not all that concentrated in its top holdings, with just 17% invested in its top 10 largest positions. Among them are Nestle SA, Royal Dutch Shell plc, Novartis AG, Roche Holding AG and HSBC Holdings plc. These prominent names should be familiar to a globally oriented investor.

The countries most strongly represented here are the United Kingdom, at 30%, and Germany, France and Switzerland, which take up about 14% each.

If investing in big and bright European stocks seems like a good move to you right now, the Vanguard FTSE Europe ETF (VGK) could be a fine starting point for your research.

As always, we are happy to answer any of your questions about ETFs. So, donā??t hesitate to send us an email. You just may see your question answered in a future ETF Talk.

Some eight years ago, I know there werenā??t many investors who thought that stocks would more than triple by now, with the Dow ascending to the 21,000 mark and the S&P 500 vaulting to nearly 2,370. 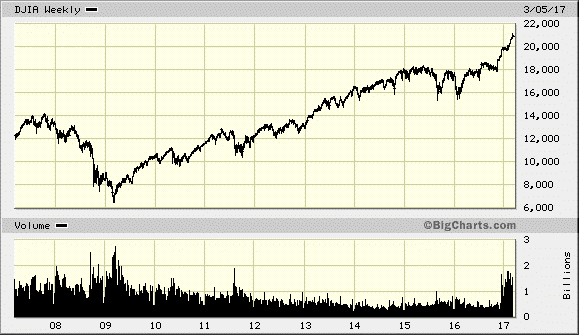 Unfortunately, many investors missed out on a lot of that upside, and many more continue to let one BIG factor keep them from achieving their goals.

That factor is fear.

Fear in the markets translates into holding way too much cash and being reluctant to put your money to work because you think stocks are going to go into another correction/bear market. While the potential for a correction and/or a bear market is always present, thatā??s no reason to shelter your money in the mattress.

The same is true for putting money to work during big rally times such as right now.

Yes, stocks are overbought. And yes, the market is trading at relatively high (although not prohibitively high) valuations. But even though stocks are at all-time highs, thatā??s still not a reason to let fear control your investment decisions.

The bottom line here is that there are always reasons to be cautious about corrections and bear markets. Yet the important lesson of March 9, 2009, is that markets are resilient and, over time, the bulls have always proven stronger than bears.

Investors who remember this will winā?¦ and those who let fear win will lose.

The Sun in Paris Ā

When the sun comes up over Paris

Except that youā??re in Paris

What more need I say?

The new solo release from former Men at Work frontman Colin Hay contains a song titled, ā??A Thousand Million Reasons.ā?¯ That title also is a lyric full of wisdom, because it applies to so many things that we all need to pause and be thankful for each day. From the sublime sun that bathes the Eiffel Tower, to the smile of a newborn baby, to the accident of fate that we live in the 21st century, there are a ā??thousand millionā?¯ reasons to be in a constant state of wonder, amazementā?¦ and most importantly, gratitude. I know I feel this gratitude each day, and I recommend you try on that face as well. I suspect youā??ll find it a good fit.

Wisdom about money, investing and life can be found anywhere. If you have a good quote youā??d like me to share with your fellow readers, send it to me, along with any comments, questions and suggestions you have about my audio podcast, newsletters, seminars or anything else. Click here to ask Jim.