Trump and the Return of the Luddites

???Protection will lead us to prosperity and strength.??? — Donald J. Trump

In his Inaugural Address, President Donald Trump began with a libertarian statement, ???We are transferring power from Washington, D.C. and giving it back to you, the American People.??? That statement has helped the stock market hit new highs, and the Dow to go over 20,000.

His agenda of cutting taxes and deregulating the economy — two topics he failed to mention in his address — will go a long ways toward that goal. But then he backed away from this libertarian ideal by insisting that all of us should ???buy American and hire American.???

He claimed that this policy would make us great again. ???Protection will lead us to prosperity and strength,??? Trump said.

His comments reminded me of the old days, when some World War II veterans refused to buy German cars and Japanese products. Thankfully, those days are long gone. Trump himself should know better, since his companies routinely buy from foreign sources. Visit a typical parking lot or shopping mall in the United States and you are unlikely to see much more than one third of the vehicles built by U.S. manufacturers. The American people have spoken!

Donald Trump???s sermon reminded me of the Luddites, bands of English workers who, in the early 19th century, destroyed machinery, especially cotton and wool mills, which they believed were threatening their jobs. Eventually, they had to be suppressed by military force. America will never be great again if she goes down the path of protectionism.

Global Trade is an Essential Ingredient of Economic Growth

Trump???s ???American First??? policy could backfire. On net balance, global trade has been a boon to the United States, resulting in lower prices and better products for the American consumer, and a higher standard of living across the globe. Trade (exports plus imports) has grown rapidly over the past 30 years. Today, it represents 30% of the U.S. economy. The figure is even higher for other countries (60%). A reversal of this trend cannot be good for foreign relations and economic growth.

Benjamin Franklin said it best: ???Most of the statutes, acts, edicts and placards of parliaments, princes and states, for regulating, directing, and restraining of trade have either political blunders or jobs obtained by artful men for private advantage under the pretense of public good. In general, the more free and unrestrained commerce is, the more it flourishes. No nation was ever ruined by trade.???

Finally, what happened to the right to choose for ourselves? Government regulations in the form of price controls, minimum wage laws or strong-arming companies into keeping their factories in the United States are a clear example of an overbearing leviathan.

In 1776, the great Adam Smith warned us, ???To prohibit a great people from making all that they can of every part of their own produce, or from employing their stock and industry in the way that they judge most advantageous to themselves, is a manifest violation of the most sacred rights of mankind.???

I???ll be discussing gold, Trump stocks and other investment strategies in three upcoming conferences in the next couple of months:

— Orlando MoneyShow, Feb. 8-10, Omni Hotel: I will be moderating a panel, ???Eight Best ???Trump??? Stocks to Buy in 2017,??? with Adrian Day, Peter Schiff and Marc Lichtenfeld, editor, The Oxford Income Letter. Plus, I will presenting several workshops, including ???The Presidential Election Cycle, Income Stocks that Outperform Bonds and Annuities,??? and giving a talk to students, ???What Every Student Should Know about Money, Investing and Jobs.??? Invite your favorite students (Friday only, Feb. 10). To sign up at no charge, use my priority code, 042311, and mention it when you call 1-800-970-4355.

— EconoSummit, Feb. 25-26, The Orleans Hotel, Las Vegas: Sponsored by the Las Vegas Investment Club, I will be speaking on “Lies, Myths and Realities: What Every Investor Should Know about the Global Economy and the Markets in 2017??? and “My Lucky Seven Lessons in Money and Investing: Updated for 2017.” The two-day seminar is normally $299 per person, but my subscribers get a $199 credit when you show up, so your net cost is only $100. To sign up, go to http://lvinvestmentclub.com/econosummit-registration-mark-skousen-promo/.

— Investment U, March 15-18, The Vinoy Renaissance Resort, St. Petersburg, Florida: Join the Oxford Club experts (Alex Green, Dave Fessler, Rick Rule and Frank Holmes) and me as we discuss the most profitable strategies to achieve the American Dream under President Trump. To find out more, go to http://events.oxfordclub.com/IU2017/IU-2017-MarkSkousen.html.

I arranged to extend the Early Bird discount for FreedomFest until Feb. 1, so please seize the opportunity to sign up now and save money before special price is gone. We want to make this year???s 10th anniversary FreedomFest event the biggest and best ever.

In case you missed it, I encourage you to read my e-letter article from last week on how the economy is back on the right track.

The Lost Art of Ballroom Dancing

Watching the Inaugural Balls on TV, I couldn???t help but notice that Donald and Melania Trump (and the rest of the new first family) don???t know how to dance.

They can’t even do a simple foxtrot to “I Did It My Way.”

How can you have an Inaugural Ball without a dance? The “ball” turned out to be a concert. There was no dance floor except on the stage, and none of the thousands of guests were invited by him to dance the night away as you would expect from a ???ball,??? except for a female service member who he joined on the dance floor at the ???Salute to Our Armed Services Ball.???

The Inaugural Ball my wife and I went to in 2001 had a nice dance floor and a great band at a local hotel… By the way, George W. Bush couldn’t dance either.

Contrast the Inaugural ???Ball??? with the annual FreedomFest Saturday night gala banquet each July in Las Vegas. Libertarians and freedom lovers know how to celebrate liberty with a top dance band, and almost everyone is out on the dance floor having a great time for several hours. 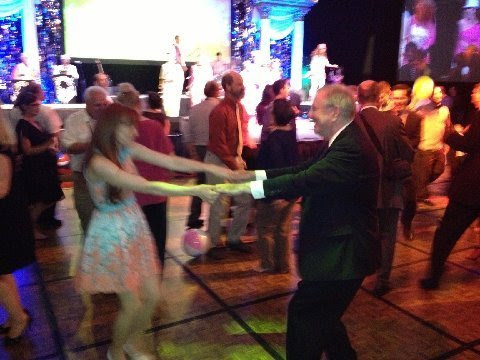 Here is a picture of Steve Forbes dancing with Naomi Brockwell at FreedomFest.

Come join us. This July 22, we are celebrating Steve Forbes??? 70th birthday at the Saturday night banquet, Paris Resort, Las Vegas. Sign up at www.freedomfest.com.

Can I Be The Poster Child Against Obamacare?