Connect with us
Income investment expert Bryan Perry shares with you his view that may help to guard your portfolio against inflation.

IŌ??m in my third week of addressing what I see as the green shoots of inflationary pressures that are ever present in our daily lives and now have shown up in a sequential pattern as the Fed and other bureaus report such facts.

The most recent Beige Book reading had the Fed stating Ō??price pressures intensified somewhatŌ?Ø in the latter weeks of 2016, with eight of the 12 districts reporting modest price increases, including wages. Just as Johnny Cash sang Ō??Folsom Prison Blues,Ō?Ø itŌ??s my firm view that the inflation train is in fact cominŌ?? round the bend.

Though we are less than one month into 2017, investors should be actively seeking out sectors that will be realizing rising revenues and profits because of price increases of goods and services that are passed on to businesses and consumers. Remember these song lyrics?

I hear the train a comin’
It’s rolling round the bend
And I ainŌ??t seen the sunshine
Since I donŌ??t know when
IŌ??m stuck in Folsom PrisonŌ?”

Inflation presents special challenges to investors. Even if your investments are growing in value, inflation is still reducing that value on the backend, which is why we commonly hear the Ō??adjusted for inflationŌ?Ø tag line with historical returns. So letŌ??s look at an action plan that incorporates certain asset classes and market sectors that will benefit from what likely will be a forward inflation rate of 2.5-3.5%, depending on how fast the economy accelerates as a result of a pro-business, pro-growth, Trump-fueled agenda.

First of all, interest rates are coming off of levels that are lower than a speed bump, and the bond market is ALWAYS way out in front of Fed policy and calendar data. It is my view that any whiff of a strong fourth-quarter earnings season and a fast-track Congressional bill to cut corporate income taxes is going to be met with the 10-year Treasury yield rising to 3.0% by the end of February or, quite possibly, into the March Federal Open Market Committee (FOMC) meeting.

A 3.0% yield represents a level not seen since the first week of January 2014, and a major technical resistance level when the economy appeared to be moving toward escape velocity before suffering another setback in growth primarily related to the meltdown in the energy and other commodity sectors. 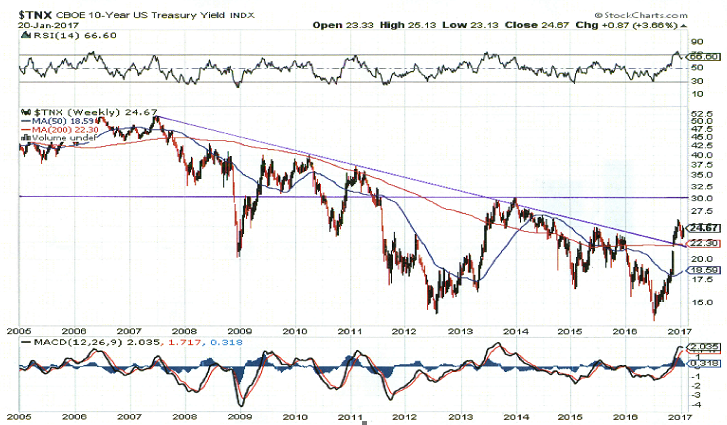 In the 12-year chart above of the 10-year Treasury Note yield, the blue lines represent where I believe the 10-year yield will pause, as per the horizontal line, while the sloping line shows what I believe is a clean upside technical breakout from a multi-year protracted downtrend that officially brought the bond rally to an abrupt end. If the old Wall Street saying of Ō??the charts donŌ??t lieŌ?Ø has any bearing on this picture, then it should provoke income investors to use the current pause to heed some fundamental advice, such as avoid long-term fixed income investments and emphasize growth in equity investments.

Repositioning is important if you think inflation is coming. This is especially true since inflation has been low or declining for at least the past three decades, and any steps you can take to prepare in advance will payoff handsomely, especially over the long term. If stocks are not an asset class of choice for risk-intolerant investors, then by all means move monies into shorter-term alternatives, particularly money funds and Treasury Inflation Protected Securities, or TIPS, issued by the U.S. Treasury. They can be bought online through www.treasurydirect.gov in denominations as small as $100.

TheyŌ??re available in terms of five, 10 and 30 years, and pay interest twice annually. And each year the value is adjusted based on the Consumer Price Index (CPI). This gives you regular interest income, plus an annual adjustment for inflation to your principal value. Rates on TIPS are currently very low. The 10-year TIPS maturing on January 1, 2027, pays only 0.375% and the 30-year TIPS maturing on February 15, 2046, pays just 1.00%. It is not much to live on for sure. But aside from money markets, itŌ??s the ultra-safe place for parking capital if you are convinced inflation is a clear threat to interest rates. IŌ??ve written in prior updates about shortening bond maturities to 5-7 years as a sound path to maintaining decent yields when waiting for bonds to mature is not a long ordeal.

For the majority of the rest of us that need to grow our capital for maximum total return, the better alternative is to invest primarily in growth type stocks and funds. You also should emphasize dividend-paying stocks in sectors that are likely to benefit from inflation. These can include industrials, financials, energy, commodities, materials, chemicals, building materials and technology. Real estate also is usually an excellent investment choice for inflation. Real estate is actually the ultimate hard asset, and often sees its greatest price appreciation during periods of rising inflation. This is especially true since the use of real estate investment trusts (REITS) is the most liquid form of making real estate a place in your portfolio, if you anticipate rising inflation as rents increase. REIT subsectors of choice include data centers, distribution and logistics, prime office, hotel and leisure, industrial and manufacturing.

WhatŌ??s interesting is that IŌ??m not reading much about the topic of inflation in the media, at least not to the extent that I find it noteworthy. The notion of super low rates around the globe keeping U.S. rates lower for longer doesnŌ??t square when European Central Bank (ECB) President Mario Draghi is forwarding the idea of tapering back on quantitative easing (QE) in the euro zone as early as April, even as the region braces for a hard exit by Britain. Growth rates for China, Japan, Germany, France and the United Kingdom are all being revised higher in just the past week, which leads me to ponder what the bond market will look like three months from now. My hunch is that, in regards to long-dated bonds, to Ō??sell first, ask questions laterŌ?Ø might just qualify as an early 2017 word to the wise.

To find out what to buy and sell to take advantage of market changes, subscribe to my Cash Machine investment newsletter. Click here for details.