The Economy Is Back on Track: Good News for Trump

The economy is now moving from “slow growth” to robust growth. Today, the federal government released data on the economy that supported this optimistic outlook, and it explains why the stock market has done well since Donald Trump was elected as the next U.S. president.

Gross output (GO), the top line of national income accounting, increased at a 4.6% annualized rate in the third quarter of 2016, according to data released by the Bureau of Economic Analysis (BEA). Adjusted GO reached almost $40 trillion, hitting $39.8 trillion in third-quarter 2016.

It is a second consecutive quarterly increase, indicating a sustained recovery as we enter 2017. Moreover, almost all industries, including the early stages of production, showed positive performance.

My Skousen Business-to-Business (B2B) Index, a measure of business spending throughout the supply chain, also increased for the second quarter in a row, after showing a decline of three consecutive quarters reversed in second-quarter 2016. The B2B Index change versus the prior quarter, in nominal terms, is an annualized 3.4%.

Based on data released by the BEA and adjusted to include all sales throughout the production process, nominal adjusted GO increased 4.6% in the third quarter of 2016 to match the same increase from the second quarter of 2016[1]. Adjusted GO of $39.8 trillion in the third quarter more than doubled the size of gross domestic product (GDP), which totaled $18.65 trillion. Keep in mind, GDP measures final output only, while nominal GDP, which is the bottom line of national income accounting, rose at a 4.4% annualized rate.

For more detail and graphs, go to www.mskousen.com.

Gross output (GO) and GDP are complementary statistics in national income accounting. GO is an attempt to measure the ???make??? economy; i.e., total economic activity at all stages of production, similar to the ???top line??? (revenues/sales) of a financial accounting statement. In April 2014, the BEA began to measure GO on a quarterly basis along with GDP.

GDP is an attempt to measure the ???use??? economy, i.e., the value of finished goods and services ready to be used by consumers, business and government. GDP is similar to the ???bottom line??? (gross profits) of an accounting statement, which determined the ???value added??? or the value of final use.

GO tends to be more sensitive to the business cycle, as well as more volatile, than GDP. During the financial crisis of 2008-09, GO fell much faster than GDP and, afterwards, recovered more quickly than GDP. Still, it wasn???t until late 2013 that GO fully recovered from its peak in 2007. The fact that the adjusted GO continued to grow is a positive sign.

We also have created a new business-to-business (B2B) index based on GO data. It measures all of the business spending in the supply chain and new private capital investment. Nominal B2B activity increased at an annualized rate of 3.4%, compared to the previous quarter, to reach $22.7 trillion. Meanwhile, consumer spending rose at an annualized rate of 3.6% to hit $12.8 trillion in third-quarter 2016.

The GO data and my own B2B Index demonstrate that total U.S. economic activity is expanding robustly. B2B spending is, in fact, a pretty good indicator of where the economy is heading, since it measures spending in the entire supply chain, and it indicates balanced growth.

I first introduced Gross Output as a macroeconomic tool in my book, ???The Structure of Production,??? (New York University Press, 1990). A new third edition was published in late 2015 and is now available on Amazon.

Click here for the Amazon page for ???The Structure of Production.???

The BEA???s decision in 2014 to publish GO on a quarterly basis in its ???GDP by Industry??? data is a major achievement in national income accounting. GO is the first output statistic to be published on a quarterly basis since GDP was invented in the 1940s. With GO and GDP being produced on a timely basis, the federal government now offers a complete system of accounts. As Dale Jorgenson, Steve Landefeld and William Nordhaus conclude in their book, ???A New Architecture for the U. S. National Accounts,??? ???Gross output [GO] is the natural measure of the production sector, while net output [GDP] is appropriate as a measure of welfare. Both are required in a complete system of accounts.??? 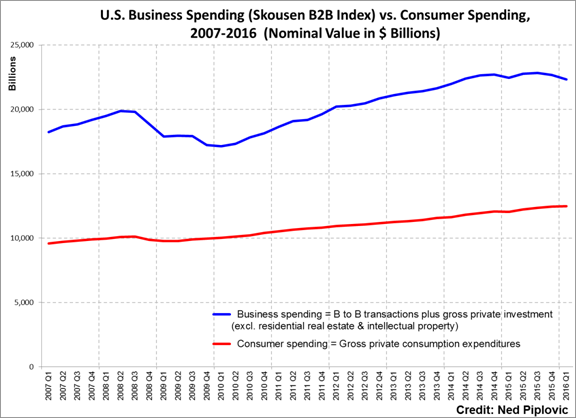 I???ll be discussing gold, Trump stocks and other investment strategies in three upcoming conferences in the next couple of months:

Orlando MoneyShow, Feb. 8-10, Omni Hotel: I will be moderating a panel, ???Eight Best ???Trump??? Stocks to Buy in 2017,??? with Adrian Day, Peter Schiff and Marc Lichtenfeld, editor, The Oxford Income Letter. Plus I will presenting several workshops, including ???The Presidential Election Cycle, Income Stocks that Outperform Bonds and Annuities,??? and giving a talk to students, ???What Every Student Should Know about Money, Investing and Jobs.??? Invite your favorite students (Friday only, Feb. 10). To sign up at no charge, use my priority code, 042311, and mention it when you call 1-800-970-4355.

EconoSummit, Feb. 25-26, The Orleans Hotel, Las Vegas: Sponsored by the Las Vegas Investment Club, I will be speaking on “Lies, Myths and Realities: What Every Investor Should Know about the Global Economy and the Markets in 2017??? and “My Lucky Seven Lessons in Money and Investing: Updated for 2017.” The two-day seminar is normally $299 per person, but my subscribers get a $199 credit when you show up, so your net cost is only $100. To sign up, go to http://lvinvestmentclub.com/econosummit-registration-mark-skousen-promo/.

Investment U, March 15-18, The Vinoy Renaissance Resort, St. Petersburg, Florida: Join the Oxford Club experts (Alex Green, Dave Fessler, Rick Rule and Frank Holmes) and me as we discuss the most profitable strategies to achieve the American Dream under Trump. To find out more, go to http://events.oxfordclub.com/IU2017/IU-2017-MarkSkousen.html.

I arranged to extend the Early Bird discount for FreedomFest until Feb. 1, so please seize the opportunity to sign up now and save money before special price is gone. We want to make this year???s 10th anniversary FreedomFest event the biggest and best ever.

In case you missed it, I encourage you to read my e-letter article from last week on two opposing economic ideas.

You Blew It! Local Government Needs to Revise Street Names

How often does the U.S. Postal Service deliver the wrong package, or send your letter/package to a similar, but wrong, address?

It happens to me all the time. I???ve lived in more than a dozen locations in my lifetime, and more often than not, the street address can easily be mixed up with one or more addresses.

For example, in Florida, I lived on a street called Virginia Ave. that meanders through Winter Park and Orlando. There are three or four streets by that name. Mail going to one address often gets delivered to someplace else. I can???t remember how many times I???ve had mail misdirected.

In New York, we live on a street called Hudson Drive, but there???s also a Hudson Street and a Hudson Avenue not far from our area. Plus, there is another Hudson Drive in a nearby town. We get other people???s mail all the time, and they get ours. FedEx and UPS trucks have difficulty getting the address right.

Why can???t the city officials stop the confusion once and for all by changing the names of similar-sounding streets?

The founding fathers of Salt Lake City thought they could solve the problem by numbering each street and house based on the distance from the city center. For example, a building with the address 800 North 500 West is 8 blocks north of the city center and 5 blocks West. Simple, right?

The problem is that this number system is not easy to remember, and visitors frequently forget whether the house or building is on 800 North or 400 North. Imagine trying to remember the address “1475 S. 650 E.” The last time I was in Salt Lake, I got lost for half an hour and had to ask directions to find a particularly difficult address. I noticed that many local communities now have names assigned to their streets to make them easier to remember.

Thank goodness we now can be guided by GPS, which uses the U.S. Global Positioning System satellites. But even the mapping services that use GPS can lead us astray from time to time.

This Fund Lets You Invest in Chinese Real Estate