Lessons from the Most Successful Investor Ever

???It is incredible the quantity of good that may be done in a country by a single man who will make a business out of it, and not suffer himself to be diverted from that purpose by different avocations, studies or amusements.??? — Benjamin Franklin

During the Christmas holidays, my wife and I drove across America on our way to California, where we will be teaching at Chapman University. During this trip, I was able to read a little book called “Killing the Market,??? the remarkable story of hedge fund investor extraordinaire Robert W. Wilson. I was surprised at how the author, Roemer McPhee, was able to pack so much information in less than 100 pages.

Wilson may be the most successful investor ever, even better than Warren Buffett. He started out inheriting $15,000 in 1956 and turned it into an investment portfolio worth $800 million by the time he died in 2013. He had no heirs, so he gave away most of his money to various charitable and non-profit organizations.

How did he do it? Overall, I glean the following basic principles from Bob Wilson:

First and foremost, he devoted his entire life to the markets. He desperately wanted to beat the market year after year, and he did not allow himself to get distracted by other interests except going to the opera. (Warning: His singular devotion to the markets cost him his marriage.)

Third, he invested in a well-diversified portfolio of individual stocks (long and short). He was not afraid to sell short companies that he thought would go bankrupt, although he was tested to the limit with his shorting of Resorts International.

Fourth, he tried to anticipate trends, such as technology in the 1970s and 1980s. Getting it right paid off big.

Fifth, he used leverage to his advantage. He borrowed heavily from overseas banks to get around the 50% margin limits in the United States. Today, I think trading stock options offers a far better way to leverage your investments without debt.

Sixth, he was willing to change his mind when the market went against him or new information became available.

Seventh, he minimized taxes by investing for the long term and by investing inside tax-deferred vehicles. This was critically important at a time when taxes on dividends and capital gains exceeded 50%.

You can buy a copy of ???Killing the Market??? at Amazon.com by clicking here.

Roemer McPhee, the author and a graduate from the Wharton School of Business, tells me that he has become a more successful investor after studying Wilson. He has agreed to speak on ???Killing the Market: The Story of the World???s Most Successful Investor??? at next year???s FreedomFest, July 19-22, 2017, at the Paris Resort, Las Vegas.

???The next time some academics tell you how important diversity is, ask how many Republicans there are in their sociology department.??? — Thomas Sowell

Thomas Sowell, the Rose and Milton Friedman Senior Fellow at the Hoover Institution at Stanford University, announced his retirement at the age of 86. He has been writing a column for 25 years, and has written numerous books on economic, political and cultural subjects. To get a flavor of his writings, I suggest you read his book, ???The Thomas Sowell Reader,??? available on Amazon. 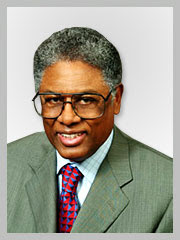 Sowell and Walter Williams have often been associated with each other as the foremost black economists who favor free markets. Sowell is six years older, but they have been life-long friends. Both experienced the racial challenges of their youth. Williams earned his Ph.D. from UCLA, and Sowell went to Harvard and received his Ph.D. in economics from the University of Chicago. Since then, both have been advocates of market solutions to problems of discrimination, inequality and poverty.

When I wrote my book, ???Economics on Trial,??? an expose on economics textbooks, Sowell sent me a letter telling me his experiences with Paul Samuelson, the famous Keynesian economist who taught at MIT. However, it???s clear that Milton Friedman and the Chicago school had a much greater influence on Sowell.

Sowell also wrote a textbook, ???Basic Economics,??? that became a bestseller. I found several major issues that had been left out of the first edition, including Say???s law (supply and production is more important than consumption), and wrote him about these omissions. The next edition contained all my suggestions. I???m a fan!

Here???s some great quotes over the years from Thomas Sowell:

Many of our FreedomFest speakers have been spot-on with their assessments about the economy, politics and the future. Peter Schiff and Bert Dohmen famously called the financial crisis of 2008 a year earlier at FreedomFest 2007. ???Capitalist Evangelist??? Wayne Allyn Root predicted Donald Trump???s victory from the beginning of the campaign.

Now, another Donald has appeared to lead the pack of our rock star investment gurus: Top New York money manager Donald G. Smith foresaw a Trump triumph and adjusted his portfolio accordingly. His managed accounts have outperformed Warren Buffett???s Berkshire Hathaway. Smith focuses on ???deep value??? contrarian investments. He bought gold shares two years ago when they were out of fashion and doubled and tripled his money. Find out what he is recommending now.

One of our most popular speakers, investment guru Jim Rogers, is excited about returning next year to celebrate with our 10th anniversary with us. He is coming all the way from Singapore to talk about ???China and the Asian Tigers, the Opportunity of a Lifetime.???

Next year, plan to meet with other top financial gurus, including international investor Doug Casey, Global Guru Nicholas Vardy, money manager Adrian Day, and the Oxford Club???s Alex Green. Attend to get their latest recommendations on the sea changes taking place under the new Trump administration.

“During my 40 years as a wealth manager, I have been around great and influential people, including Ross Perot and John Templeton. During my entire career, however, I have never before been to one venue like FreedomFest that allowed me access to and interaction with such a concentration of great thinkers and financial professionals.??? — Rick Sampley, senior VP, Raymond James

Plus we have reserved a room block at the five-star Paris Resort for only $129 a night. Book your room while you still can!

Join me for the MoneyShow Orlando

The ???Critically Counterintuitive??? Rules of Investing