The Reality of Rising Rates, a Rising Dollar and a Rising Trade Deficit

This is the season that reminds us of how much we as Americans should be thankful for our blessings.

Those who are invested in the stock market have an extra measure of holiday blessings that came almost universally unexpected. Benchmark U.S. stock indexes have rallied sharply in anticipation of fiscal stimulus measures proposed by the incoming administration of President-elect Donald Trump. Plus, the S&P 500 stock index has surged more than 8% since the Nov. 8 election, due, in large part, to sectors that are expected to benefit from an inflationary policy that would expand U.S. gross domestic product (GDP) growth. 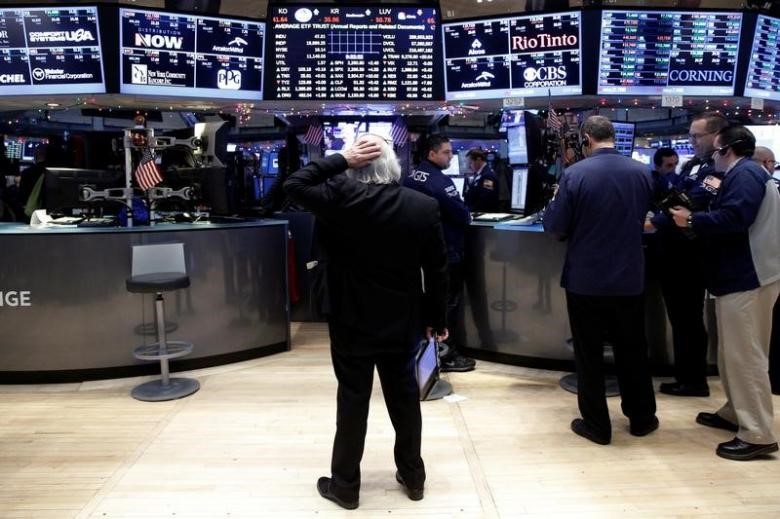 The S&P financial sector has led the way higher; with a gain of more than 17% as bond yields have spiked. That positively affects Net Interest Income, the life blood of a bank???s core earnings growth. The yield on the U.S. 10-year Treasury touched 2.62% last Friday, up from 1.78% the day before the election; a 47% jump in yield. This is a remarkable move, more remarkable than the gains for the stock market.

And then there was the breakout in the greenback. The U.S. Dollar Index (DXY) that trades against the other five major currencies in the world surged from 97.3 to 103.5, and is now at the highest level against the euro in over a decade. With the European Central Bank (ECB) telegraphing a continuation of quantitative easing (QE) well into 2017, currency speculators are predicting that the euro (currently 1.0435) will trade at parity, or 1:1, with the dollar as the next target.

Based on the October data, it stands to reason that the November and December data on trade will show a further widening in the trade deficit that could prove to be a significant drag on GDP growth in the first quarter, especially with other central banks trying to devalue their sovereign currencies to boost exports. Solid domestic demand will increase imports and a renewed appreciation for the dollar will limit the strength in exports. What???s interesting is that, on a non-seasonally adjusted basis, imports from Mexico and China (both on the Trump unfair trade hit list) recorded their highest levels in a year. The current trade deficit and expected immediate worsening of it, just as Mr. Trump takes office, is very likely to gain top priority in his first 100 days.

Nothing Like Serious Headwinds to Threaten a Perfectly Good Rally

There is little argument about what sparks a sudden and tremendous stock market rally such as the present: rising expectations coupled with pent-up demand. Since Nov. 8, investors have potentially poured fuel on the fire because nothing has actually happened while everyone is acting like it???s already happening. Those expectations, along with improving economic data and the U.S. Federal Reserve’s recent decision to raise interest rates while signaling a quicker pace of hikes next year, have also served to strengthen the dollar and push bond yields higher in not-so-gradual fashion.

As such, the stronger dollar and rising bond yields are clear and present conditions that could be laying the seeds for a sizable pause in equity prices once the year-end window dressing by fund managers is complete. No one argues that rising bond yields are beneficial to banks, but they also lift the overall cost of capital for companies and shrink the relative valuation advantage stocks have had over fixed-income investments. The stronger dollar and higher interest rates will, at some point, filter through to earnings. As with any economic cycle, it???s not a matter of if, but when.

In the first quarter of this year, large multi-national firms blamed the rising dollar for undercutting their earnings. And just when the overall earnings from S&P 500 companies were ending an earnings recession in the latest quarter, the greenback vaults higher and threatens to be a major earnings headwind. Adding to the wind shear, stocks appear to be getting pricey, ending last week with the current price-to-earnings ratio for the S&P 500 at 20.8, well above its long-term average of 16.6, according to Thomson Reuters data.

It was only during late June/early July of this year that the yield on the S&P 500 was quoted at 2.19% while the yield on the 10-year T-Note was hitting bottom at 1.34%. As of last Friday, the S&P 500 dividend yield was 2.07% versus a yield of almost 2.6% for the 10-year U.S. Treasury after six straight weeks of gains. As historical market moves go, that is a big valuation reset. That reset, in conjunction with the S&P 500 trading with a 20.8 price-to-earnings (P/E) ratio, will certainly be a focus of discussion heading into the year’s end.

Stocks in hot sectors tend to get ahead of themselves as stocks in unpopular sectors get oversold to the downside. Last week, financials gave back 1.2% while utilities and telecoms returned to the leader board with 1.8% gains, even as Treasury yields ended near their highs. One reason I believe in this disparity is that reports of bank insiders selling at a record rates are making headlines. As you can see by the chart below, in the first quarter of 2016, when banking stocks were tanking, insiders were buying at the fastest pace in five years. Insiders also were purchasing when the bull market was in its infancy and selling as it gained steam coming out of the Great Recession. 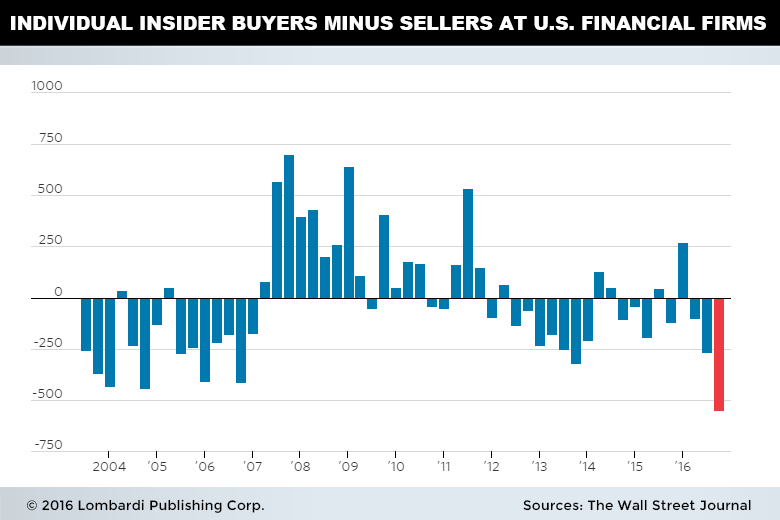 A silver lining against these challenges of higher rates, a higher dollar and some quick and heavy profit taking in the hot bank sector is that current investor sentiment indicates earnings will be accelerating. Plus, the economy is strong enough to be able to withstand these headwinds. What is going on is quite normal for a recovering economy, especially one that is forecast to move into a higher gear in a market where technology allows capital to make gigantic adjustments in rapid time.

A climb in rates and the dollar are hallmarks of economic growth, provided the increases happen at a steady pace. As long as rates are rising for the right reasons and the economy is proving that out, then it should be a potential positive for equities. Any market pause should be temporary, as earnings will eventually rise to close the spread on the current high market multiple.

In case you missed it, I encourage you to read my e-letter column from last week about the headwinds bulls face right now in this market environment.

Editor’s Note: Recently we told readers about a little-known investment program (only 3,023 people in the U.S. are currently using it). Not only is it completely legal and available in every single U.S. zip code… it’s also completely immune to politics. In fact, it???s not affiliated with the government in any way. Find out if this program is right for you, by following this link.

Give the Gift of Financial Preparedness in 2017