Connect with us
The recent Fed rate hike is an indication of its belief in the market's strength. Expert Doug Fabian shares his take on the market's direction from here.

The big market-moving news this week was the Fed, and its decision to raise interest rates for the first time in a year.

That move on Wednesday by Janet Yellen and her fellow central bankers was widely expected. What wasnâ??t anticipated was the ratcheting up of rate-hike expectations for 2017.

The Fed â??dots,â?ť which are just a plotting of where the Fed members think interest rates will be at the end of next year, now reflect as many as three 25-basis-point hikes to the federal funds rate in 2017. Before the meeting, the smart money was projecting the Fedâ??s dots would only reflect two rate hikes next year.

The increased dots, along with a clearly â??hawkishâ?ť Yellen press conference, made it clear to us that interest rates are likely to go up at least a few times next year. Of course, this is by no means a certainty. Remember that this time last year the dots were calling for four rate hikes in 2016, and we only saw one.

What Yellen also made clear is her intent to not let the economy run hot, particularly if President-elect Trump succeeds in adding more fiscal stimulus to the economy early in his administration.

While the market reacted with a sell-off on Wednesday following the Fed announcement and Yellen presser, stocks staged a nice rebound on Thursday. 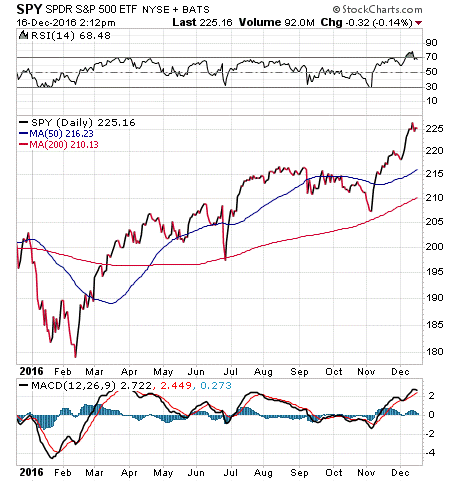 The S&P 500, as measured by the SPDR S&P 500 ETF (SPY), continues to trade very close to all-time highs, as the â??Trump rallyâ?ť remains firmly intact. Meanwhile, there have been other segments of the market that also continue to heat up, namely interest rates and the U.S. dollar.

This Pure Play Represents 85% of the Taiwanese Market