SALT vs. Ruff: A Tale of Two Conferences

In the early 1980s, I was a keynote speaker at most of the Ruff National Conventions. These ???doom-and-gloom??? conferences were hosted by Howard Ruff, who died on Nov. 12. As I told the New York Times and Wall Street Journal (both ran substantial obituaries on this famous ???prophet of doom???), The Ruff National Convention was the granddaddy of gold-bug conferences in the 1980s, surpassing the New Orleans Gold Conference in attendance. Howard was a friend, and I attended his funeral last week.

But Ruff had a faulty business model for his newsletter, The Ruff Times. In hindsight, The Ruff Times could not last — Ronald Reagan was elected president and the good times returned. Interest rates declined, the economy grew and the traditional stock and bond markets made a huge comeback while the alternative investments in gold and silver fell into disfavor.

Contrast the Ruff model with the SALT conference run by hedge fund manager Anthony Scaramucci, who is the president of Skybridge Capital in New York. Since 2009, he has hosted the SALT conference in Las Vegas for well-heeled hedge fund and money managers from around the country. He???s now as big as the Ruff Conventions were in the 1980s.

But there???s a big difference that Anthony Scaramucci addresses in his new book, ???Hopping Over the Rabbit Hole: How Entrepreneurs Turn Failure into Success.??? He took an enormous risk by producing his first event right after the 2008 financial crisis. Through hard work and creativity, he achieved success and turned his company around. His model was based on a positive future for America and the global economy. As he states in his book, ???We need to grow, scale, and evolve.???

Humility is a big part of turning failure into success. ???In order to rehabilitate your reputation, improve your image and get a second chance, you have to first be willing to admit wrongdoing and be accountable.???

As a result, Anthony, his firm and his SALT conference have a great future.

I highly recommend Scaramucci???s book. You can order it by clicking here.

Note: I???m happy to announce that Anthony Scaramucci will be addressing us at next year???s FreedomFest, July 19-22, 2017, and paying tribute to Steve Forbes and Forbes magazine. See details below. See you there! 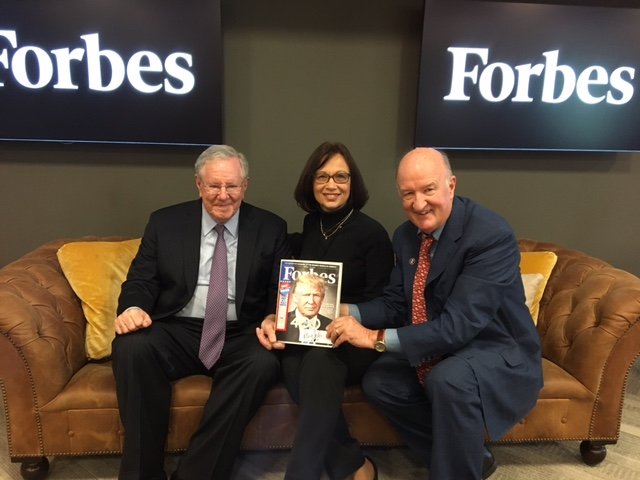 My wife Jo Ann and I met this week with Steve Forbes (see accompanying photo), our conference ambassador, and he is excited about our 10th anniversary. It also happens to be Mr. Forbes???s 70th birthday that week, and we plan to celebrate his life and work, and hope you will join us for this most memorable FreedomFest.

To sign up, go to www.freedomfest.com. For the fabulous Danube river cruise, go to http://www.globalfinancialsummitcruise.com/?scode=035323.

The Year of the Businessman at FreedomFest 2017

O WOW! Forbes Billionaire Ken Fisher and Publisher Rich Karlgaard to address FreedomFest for the first time! Next year will be the 100th anniversary of Forbes magazine, and we???re celebrating. Come join the festivities! B. C. Forbes, Steve Forbes???s grandfather, started the magazine in 1917. We???re going to have a special session on the impact that the founding Forbes had in business and investing with his grandson Steve Forbes and these experts: Ken Fisher holds the record for writing a Forbes column for 33 years, and is now a member of the Forbes 400 Richest List. Rich Karlgaard has been publisher since 1998. It will be their first time at FreedomFest, and you won???t want to miss meeting them.

This is going to be our biggest and best FreedomFest ever, so now is the time to plan a trip to Vegas in July. We are expecting a record turnout, so I encourage you to sign up now and take advantage of our ???early bird??? discount — save $100 per person/$200 per couple over the registration fee — which ends on January 15.

Our registration page is now up and running, so go to http://freedomfest.com/register-now/. You can also registered by calling our toll-free number 1-855-850-3733, ext. 202, and by talking to Jennifer, Amy or Karen. Call today!

What???s worse than fake news? How about fake advertising.

All year long, we saw the headline running in Yahoo Finance and everywhere else that predicted, ???Stock Market to Crash 80% in 2016.??? If you clicked on the ad — and apparently millions of investors did because the ad kept running all year long, even into late November — you saw a video of a financial guru predicting monetary chaos due to the skyrocketing national debt.

But there was no 80% crash in the stock market this year. There wasn???t even a 20% correction on Wall Street. On the contrary, the market hit a record high, and so far the Dow Jones Industrial Average is up 6%, not including dividends.

I understand the concern these doomsayers express. Our country does face a serious debt problem. But is the outlook that dim? Another gold bug says that the crash will be ???worse than 2008, Black Monday and the Great Depression.??? Talk about overdoing it.

Not surprisingly, financial Armageddon has been postponed once again because of low interest rates, which has made it easy to finance the growing debt. When interest rates skyrocket, that???s when a debt crisis could hit — and rates are finally starting to rise.

But timing is everything. A debt crisis did not develop in 2016, and those who followed the advice of the doomsayers have lost a bundle. I???m especially sympathetic to those retirees and seniors who fell for this over-the-top prediction and followed their advice, selling stocks and buying gold. It is estimated that up to 30% of seniors have anxiety attacks. How many have suffered chronic depression because of these false prophecies? No doubt these merchants of doom made a fortune, but they did it by taking advantage of people???s fears, and they should be held accountable. As the late Howard Ruff was fond of saying, ???To err is human, but to be paid for it is divine.??? He also said, ???When you mess up, fess up!??? Those of us in the financial forecasting business have all made bad predictions. When we do, we should apologize and try to improve by asking the question, ???What did we miss????

Instead, I see the promoters of this ad have doubled down. The brazen forecast has been extended into the next year: ???80% Stock Market Crash to Strike in 2017.???

How Trump Could Ruin His Presidency