Connect with us
After a period of sluggish performance by the market, a burst of optimism force has overtaken the nation. Read investment expert Fabian's analysis on its effects.

I must admit to my distinct bias toward Thanksgiving as my favorite time of year.

Sure, I love Independence Day and the summer surfing season, but there???s nothing that compares to the nip in the air in November, a big holiday feast and the Christmas season right around the corner.

This time of year is also good for the stock market, as we are firmly in the growth season. Now, this year???s growth season has benefited from something I call ???the optimism force multiplier.???

Folks in the country and in the stock market now seem particularly optimistic about the prospects for economic growth due to the incoming Trump administration and a Republican Congress. If the president-elect begins implementing a pro-growth agenda of tax cuts, slashed regulations and infrastructure spending (i.e. fiscal stimulus), then the economy and the markets will likely flourish.

Right now, there is a lot of optimism on that front, and that optimism has been reflected in stocks surging to all-time highs. The Dow now trades about 19,000 while the S&P 500 just passed the 2,200 level.

Interestingly, the optimism can really be seen in small-cap stocks, as the Russell 2000 has been one of the biggest beneficiaries of the ???Trump bump.??? 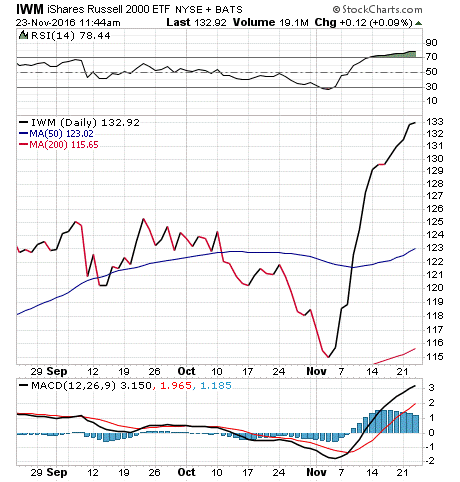 The chart above shows just how strong the move in small caps has been since Election Day.

That definitely is a reflection of the renewed optimism in the country???s business climate, as investors are betting that the smaller, innovative companies are about to launch along with renewed U.S. economic growth.

This is the ???force multiplier??? effect of optimism in action, as we have yet to have any policy changes put in place (President-elect Trump doesn’t even take office until Jan. 20).

The bottom line here is that this Thanksgiving, we should be thankful for the renewed optimism in the country, particularly as it relates to the economy and the financial markets.

For investors, this optimism force multiplier is something that you should be taking advantage of right now, as the opportunity in ???Trump win??? sectors abounds.

If you want to get in on our newest portfolio recommendations, then I invite you to give my Successful ETF Investing advisory service a look over the holiday weekend.