Connect with us
With the election just a day away, income investment expert Bryan Perry digs into the earning reports to find out what may happen in the markets.

Just as the earnings season was getting into a bullish rhythm with the majority of companies reporting third-quarter results coming in above estimates, some recent events sent fireworks throughout trading desks around the globe that once again proved we are in a very schizophrenic investing landscape.

For most of last week, momentum was building on the notion that a post-election rally was in the making as long as the outlier risks were of the garden variety. The past week was packed with earnings releases and the economic calendar also featured a few noteworthy reports.

During the 2008 losing streak, the index dropped a cumulative 23% as the financial system teetered on collapse. This time around, the S&P 500 is down just 3% during the current slide.

A short-term bump in the tech road is easily digested. The underperformance in the Nasdaq was mostly due to relative weakness in biotechnology. Some of the weakness in biotechnology (see Biotechnology Index —Â NBI chart below) was exacerbated by a poor quarterly showing from drug distributors. In addition, soft forward guidance reminded us that the pharmaceutical industry continues wrestling with pricing concerns that may become a regulatory issue once again, especially if Hillary Clinton wins the presidency. 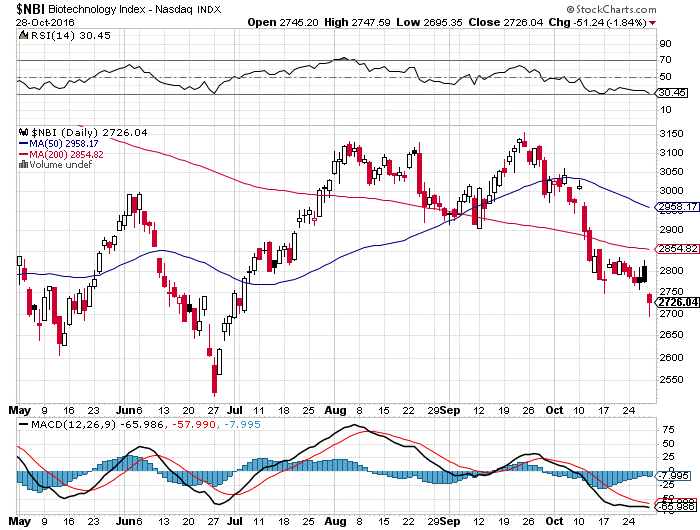 Adding to the headline risk, Hillary Clinton’s chances were called into question after it was reported that the FBI is once again looking at the presidential candidate after new pertinent information came to the forefront. The news introduced uncertainty ahead of the upcoming election, knocking the stock market from its early September high. Interestingly, biotech names climbed off of their lows after the news began making the rounds.Â However, the FBI director’s update to Congress on Nov. 6 reported the latest batch of emails the agency reviewed did not turn up any criminal activity on the part of Hillary Clinton, who received a boost in the polls. A market rally today followed that news.

And then thereâ??s the upcoming Federal Open Market Committee (FOMC) meeting scheduled for Dec. 14. Rate hike expectations for December firmed up after New Home Sales and Pending Home Sales for September beat expectations. Third-quarter advance gross domestic product (GDP) also surprised to the upside (2.9% versus consensus 2.5%). The growth rate was the fastest recorded in two years after expanding an anemic 1.4% in the second quarter.

Since the recession ended in mid-2009, the economy has grown at roughly a 2% annual rate, making the current expansion the weakest on record back to 1949. Exports, which add to GDP, increased at a 10% rate in the third quarter, the best gain in nearly three years. Export gains had slumped over the prior year and a half, in part, because a stronger dollar made U.S. goods more expensive overseas. But separate data suggested that shipments of agricultural products, especially soybeans, supported the latest gain. (source: Wall Street Journal, U.S. Economy Roars Back, Grew 2.9% in Third Quarter)

To read the rest of the article, click here.

The Most Divisive Election in American History