Connect with us
Dr. Skousen explains why giving out free valuables may actually not serve the greater good in the grand scheme of things.

I recently attended the bi-annual general meeting of the Mont Pelerin Society, a group of political and economic thinkers from around the world. I???ve been attending most of the group???s meetings since 1988, when I was the guest of Milton Friedman. I???ve been a member since 2002, and I have spoken on a number of occasions.

The society was founded by Friedrich Hayek in 1947, and early members included Ludwig von Mises and Milton Friedman. There always has been debate on a variety of issues (money, the business cycle) between the Austrians (Hayek and Mises) and the Chicago school (Friedman), which I catalog in my book, ???Vienna and Chicago, Friends or Foes???? Click here to buy on Amazon.

This year, I hosted a breakfast in Miami on ???Eureka: The Feds Start Measuring Hayek???s Triangle,??? featuring gross output (GO), my macro statistic. A full crowd attended. You can read more about GO at www.mskousen.com, and why it???s a revolutionary ???top line??? in national income accounting.

We also had an exhibit booth, where I sold copies of my books. My daughter Valerie came and talked to attendees about next year???s FreedomFest (see photo below). 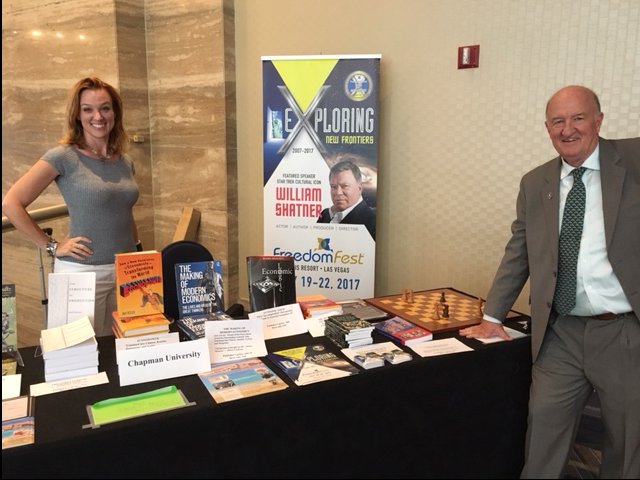 I learned an important lesson at the Mont Pelerin Society meetings. Of the 20 or so exhibitors at the conference, I was the only one who charged for books. All of the other organizations, all non-profits, handed out free materials and books at no charge.

I ended up selling most of my books, with the hope that they will be read and appreciated. ???Vienna and Chicago??? sold out. So did ???The Making of Modern Economics,??? the story of the great economic thinkers from Adam Smith to Milton Friedman.

After the conference, Richard Rahn, a long-time friend and geo-political commentator, wrote a column for the Washington Times recommending my book. He wrote, ???the single best one-volume book on the history of economic thought ??? both entertaining and dense in useful information, and now in its third edition ??? is Mark Skousen???s ???The Making of Modern Economics: The Lives and Ideas of the Great Thinkers.??????

I should also add that John Mackey, CEO of Whole Foods Market, has read “The Making of Modern Economics” three times and he loves it so much. It makes a major contribution by creating a running plot, with Adam Smith and his invisible hand doctrine becoming the hero of the story who triumphs in the end over Marxists, Keynesians and socialists.

How to Avoid Immigration, Terrorism, And Health Care For 90 Minutes