The big news event this week came from Fed Chair Janet Yellen and her band of central bankers, who opted to leave interest rates alone, as was widely expected.

The Federal Open Market Committee (FOMC) also changed some verbiage in its official September meeting statement, and those changes also were widely anticipated.

Hereâ??s one of the key lines from the FOMC statement:

“The committee judges that the case for an increase in the federal funds rate has strengthened but decided, for the time being, to wait for further evidence of continued progress toward its objectives.”

Another key line in the statement was that the Fed now thinks that â??near-term risks to the economic outlook appear roughly balanced.â?ť That is Fed code for yes, we will hike rates in December, so be ready, Mr. Market.

While we may get a rate hike in December, for now the market has breathed a sigh of relief that there were no surprises in the Fed statement. The result was a strong relief rally on Wednesday and Thursday that sent stocks up nicely on the week. 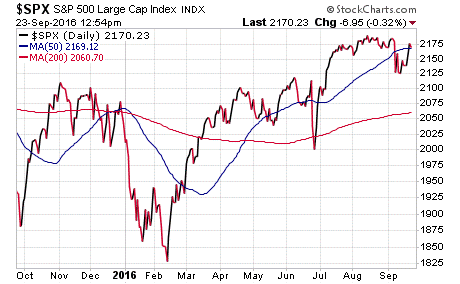 Today, stocks have pulled back a bit, and that is to be expected after the gains over the prior two trading sessions. And while stocks remain in an uptrend, trading near their all-time highs, there are plenty of reasons to feel uneasy about this market.

To read the rest of the article, click here.

What Happens to the Democratic Party if Clinton Loses?