The Bulls Cheer on as the Economy Recovers

The Running of the Bulls, or ???encierro??? in Spanish, is a practice that involves masses of people running in front of a group of stampeding toro bravo cattle that have been let loose on a sectioned-off subset of a town’s streets. The most famous event of this kind is the eight-day festival of Sanfermines in Pamplona.

The Pamplona encierro is the most popular one in Spain and has been broadcast live on the public Spanish national television channel for over 30 years. In those three decades, viewers have been fascinated by how multitudes of people are willing to risk being gored and trampled in an attempt to outrun a half dozen hopped up bulls that are being incited by a boisterous crowd. It is the highest-profile event at the San Fermin festival, which is held every year, July 6-14.

It just so happens that the S&P 500 experienced its own “running of the bulls” during the same week as the real thing this year, as the index broke out to a fresh all-time high on July 11 in which the bulls stampeded over naysayers and short sellers. Interestingly, besides the fact that the encierro in Pamplona and the current stock market rally occurred at the same time, there are other stark similarities between the two. For instance, participants in both have to be at least 18 years of age (it’s illegal to open an account under 18), should not be under the influence of alcohol (makes sense) and need to run in the same direction as the bulls or risk getting steamrolled.

The main difference is that the encierro ends after half a mile, whereas the running of the Wall Street bulls can last for months. Looking at a three-year chart for the S&P (see below), the recent upside breakout looks legitimate for a couple of reasons. It???s the first rally attempt all year in which there has been a distinct pattern of money coming out of Treasuries and moving straight into equities of all ten sectors of the stock market. There was a brief pullback in the safe-haven utility, telecom, real estate investment trusts (REITs) and consumer staples sectors at the expense of more cyclical areas, but as of late last week, those sectors were fully re-engaged with the rally as income investors continued to swarm dividend-paying assets on any and all dips. 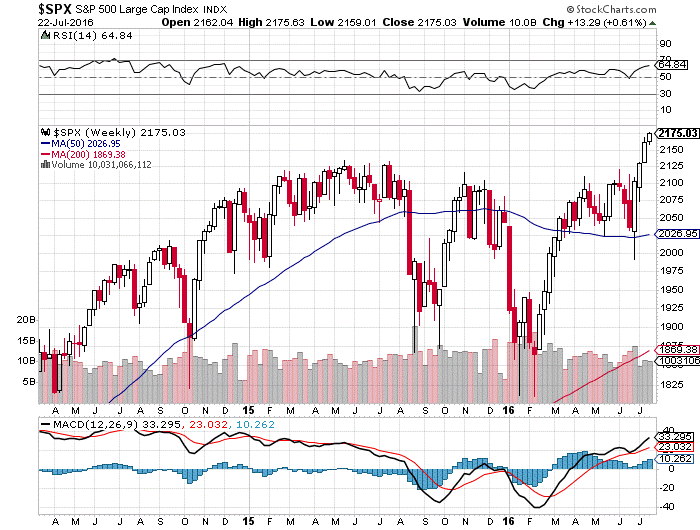 High-yield spreads headed the other way though, as the high-yield 10-year spread plunged 48 basis points to 540 after seeing a 13-basis point decrease recently. The spread marked a seven-month low when it reached 567 in late June, and last week’s move sent the spread to its lowest level since last September. The narrowing of the spread indicates rising confidence in balance sheet creditworthiness for junk bonds that coincides with rising confidence in earnings for stocks. I’ve noted several times that junk bonds are significantly more correlated with the equity market than they are with the bond market, so seeing the spread narrow sharply as the stock market breaks out is fitting.

Mark Your Calendar for July 29 — A Trifecta of Friday Figures

The U.S. economy is clearly on better footing as economic data has surprised to the upside and financial conditions have also eased recently, suggesting that the United States is entering the third quarter on a strong note with solid growth momentum. Preliminary second-quarter Gross Domestic Product (GDP) figures are due out this Friday and are expected to show the annual growth rate accelerating to a healthy 2.6% from the 1.1% three months earlier.

While all is well with the U.S. markets, Japan and Europe continue to be challenged by deflationary pressures. For the Bank of Japan (BOJ), this Friday???s rate decision to cut its key rate from -0.2% from -0.1% comes after a big election win for Prime Minister Shinzo Abe, who pledged to work on a stimulus package with a headline figure of 20 trillion yen, or about $190 billion in U.S. dollars. The promised stimulus package takes some pressure off the BOJ, but the market has still priced in a rate cut nonetheless.

Over in Europe, the week???s top event will be Friday???s release of banking stress test results with a special focus on Italian lenders, seen as the weakest within the sector due to an estimated $397 billion worth of non-performing loans on their books. UniCredit, Italy???s largest financial services company by assets, has already undertaken ???74 billion in loan write-downs and capital increases since 2008. With falling profitability and ???80 billion in non-performing loans, its capital cushion barely meets European Central Bank requirements. (Source: Wall Street Journal — July 4, 2016 — Bad Debt Piled in Italian Banks Looms as Next Crisis).

Even as the U.S. economy is moving out of first gear, the Federal Open Market Committee (FOMC) rate decision set for this week is all but certain to see no change in the Fed Funds Rate. Meanwhile, the Fed will acknowledge improved economic prospects, but will offer few hints about its next move in order to avoid repeating the past gaff of stoking rate hike expectations. Assuming the Fed does pass on a rate hike this week, and possibly in September, the Dollar Index (DXY), currently trading at 97.35, will very likely continue to rebound toward its 52-week high of 100.51, an amount that will re-invite foreign-exchange currency pressure on earnings of U.S. multi-national corporations and was a primary culprit for dismal first-quarter earnings.

As such, the Fed will not want to set a fire under the dollar when the negative consequences are so immediate. So with the Fed cornered, a potential Italian banking crisis requiring a full measure of European Central Bank intervention and a Japanese Prime Minister chomping at the bit to keep a campaign promise of boosting stimulus, the domestic stock market has what could be termed a ???central bank put??? in place, stealing from the original ???Bernanke put??? that characterized the various rounds of quantitative easing under former Federal Reserve Chairman.

Under these favorable conditions and in light of the rebound in the junk bond market, skillfully managed covered-call strategies and dividend growth stocks with yields in excess of that offered by the 10-year T-Note (TNX — 1.59%) and the SPDR S&P 500 ETF Trust (SPY — 1.99%) will be the torchbearers for income investors who are seeking rising income that is based on rising earnings prospects.

Finally, before I share the most intelligent way to trade options today, let me tell you why I think so. First, this strategy lets you leverage the biggest companies in the world. They include Apple, Google, Facebook and other market-leading names. Secondly, we’re able to sell volatility back to the market on these companies, while generating substantial income at the same time. I’ve developed a way for my subscribers to profit from this strategy over and over again. The best part is it takes very little time. All you have to do is follow my simple instructions. Click here to learn more about my new Instant Income Trader service.

In case you missed it, I encourage you to read my e-letter column from last week about why my recommended Long-Term Equity Anticipation Securities (LEAPS) are suited for the current economy. I also invite you to comment in the space provided below my Eagle Daily Investor commentary.

DNC Internal Debate: Sure, Trump is A Fascist--But What About Republicans?