Leading up to earnings season the major averages built up some nice gains, based on the expectation that most companies would at least meet their widely lowered first quarter profit forecasts. Without much fanfare, that???s exactly how the reporting season has played out, with the exception of a few high-profile beats and misses along the way.

But the more telling support under this market has been the firm bid in oil. WTI crude currently trades at $46 a barrel as we look ahead to the next OPEC meeting, in early June. The strength of crude has contributed to the further compression of high-yield spreads, although other spreads have not been as affected.

The past week saw the S&P 500 fail to take out overhead resistance at the 2,100 level. Relative weakness in large-cap tech names kept the Nasdaq Composite in the red for the year. Tech giants Microsoft, Google and Apple all disappointed ???the crowd??? that determines the directional moves of their stocks. On the other hand, tech stalwarts Amazon.com, Expedia and Facebook saw sizeable share price gains after the release of their Q1 results.

On the economic front, investors did receive some market-moving data over the past week: The advance reading of first-quarter GDP growth came in at +0.5%, below the +0.9% consensus. This result is a yellow flag for business capital spending, and it is not what the market was banking on.

Wednesday afternoon featured the release of the latest policy directive from the Federal Open Market Committee (FOMC), in which it acknowledged that economic growth appears to have slowed since the Fed???s March meeting and that inflation is expected to remain low over the near term. 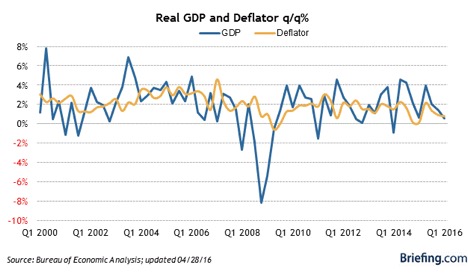 What we can extrapolate from those admissions is that before raising interest rates again, the FOMC will want new economic data that shows sustainable progress being made toward the Fed???s inflation and employment objectives.

In other words, it seems a very low probability that the FOMC will raise rates in June. Overall, the April directive contained a lot of language similar to the March directive. It also exhibited the same unwillingness to state a risk bias.

As a result, the Fed funds futures market expects that the next rate hike will be announced in November (a 51.7% probability). A week ago, the market was pricing in a 50.0%+ likelihood of the first hike being in December.

So, after a week of rising, but erratic, earnings, rising volatility, and murky Fed talk, what???s the takeaway for income investors? It stands to reason that the market will continue to be range-bound for the weeks ahead.

A range-bound market means that buy-and-hold strategies that do not pay any sort of yield will frustrate investors. However, real cash flow returns can be manufactured by employing covered-call strategies and credit-spreads on crème-de-la-crème, blue-chip stocks that are beating Wall Street estimates and reiterating or raising forward guidance.

Just as a heads up, I???ll be launching a new service in June that puts into place a very lucrative strategy along those lines. I???ll be affording retail investors a time-tested method by which they can own a portfolio of heavy-weight stocks, whose shares trade above $100, and also generate an annual income stream north of 25%.

Such returns really can be generated from best-of-breed stocks without laying out hundreds of thousands of dollars to maintain a diversified basket of stocks including the likes of Home Depot, Facebook, McDonalds and Northrup Grumman.

The current ???washing machine??? market is ideal for cashing in on volatility, and with the right trading strategy it can be exceptionally rewarding. Stay tuned for more details in the weeks leading up to the launch. I???ll be sure to provide all the information necessary for retail investors to put this turbo-charged income program in place as a high-performance component of their overall portfolios. There is no time like now for a hot new customized income strategy that will generate extreme income in a stock market that can???t get out of its own way.

In case you missed it, I encourage you to read my e-letter column from last week about earnings expectations versus bull market expectations. I also invite you to comment in the space provided below my Eagle Daily Investor commentary.