From the latest headlines within the energy sector, there is a well-defined resistance level for WTI crude at $40 a barrel. Last week, U.S. crude stockpiles rose by 2.3 million barrels to 534.8 million barrels, the seventh week at record highs, data from the U.S. government???s Energy Information Administration showed. The recent price recovery was muted as the market???s focus switched back to signs of growing oil stocks. The front-month contract for U.S. crude futures has dropped to $37.57, the lowest since March 16.

High global inventories put the sustainability of the gains into question despite an 11-year high in seasonal refinery utilization. There???s a backlog of oversupply that needs to be worked out of the system.

Crude prices have risen about 50% since mid-February on optimism over a proposal by several major oil-exporting countries to freeze production amid signs of falling U.S. output. I???ve been cautioning all the while that this is akin to bank robbers agreeing on who is going to rob which bank in the same city. Saudi Arabia will freeze its oil output only if Iran and other major producers do so, Saudi Deputy Crown Prince Mohammed bin Salman told Bloomberg in an interview.

OPEC crude output rose in March to 32.47 million barrels per day (bpd) from 32.37 million bpd in February, according to a Reuters survey, while Iran is expected to add another half-a-million bpd of oil within a year. The good news is the recent rally has allowed U.S. producers to hedge their production at higher prices, which could keep more of them from shutting down.

Adding to the dollar???s gains, the Chicago Purchasing Manager Index for March came in at 53.6 versus a consensus forecast of 49.9 and the Institute for Supply Management or ISM Index for March checked in at 51.8, up from 49.5 in February and above the consensus estimate of 50.6. This reading broke a five-month streak of sub-50 readings. 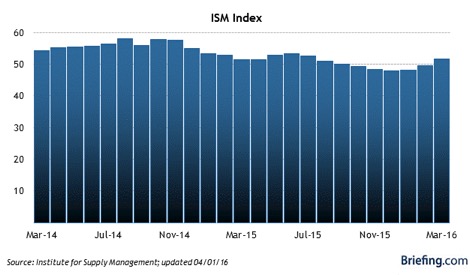 One would think that a nice bump in the manufacturing data would trigger selling in the bond market, but fixed income investors are convinced the one-month read is the beginning of a trend.

Across the Pacific, a gloomy manufacturing report in Japan knocked global equity markets lower with the Nikkei hitting a one-month low. The closely watched Tankan survey, for lack of a better word, ???tanked.??? Business sentiment among Japan???s big manufacturers deteriorated to the lowest in nearly three years and is expected to worsen in the coming quarter.

The broad takeaway from this week???s cross current of economic data is while there are hints of improvement on the domestic economic front, the bond market sees the world quite differently with outside risk of a global slowdown eventually washing up on our shores.

The sustainability of the commodity rally of late is under fresh scrutiny, the Fed is dialing back its rate hike ambitions, Japan is facing recessionary pressure and little has changed in the fixed income markets. In fact, the yield on the benchmark U.S. 10-year Treasury fell this past week from 1.90% to 1.77%, heading back down to levels last seen in February, a troubling development. Yet U.S. equities are favoring the move because there is nowhere else to go for yield other than dividend paying stocks. 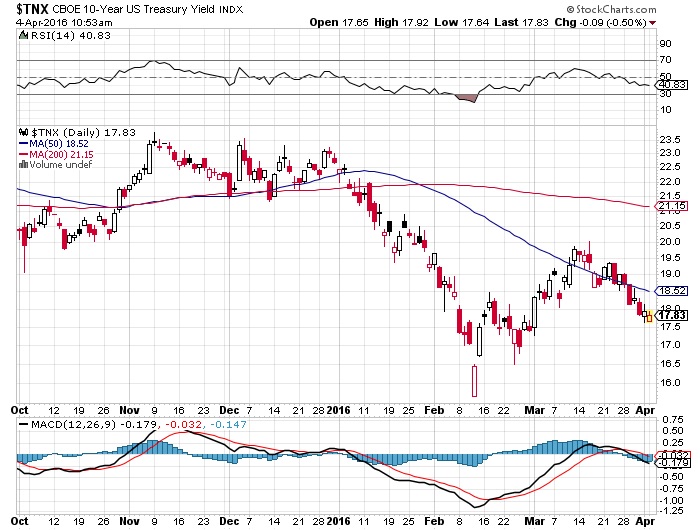 The first is how well the U.S. stock market traded against renewed selling in the oil patch. That???s pretty much a first for the year and whether the rest of the market???s sectors can de-couple from the energy trade remains an open question.

The second notable development is the silver lining in the manufacturing numbers that were complemented with another month of steady jobs gains as both point to the notion of a better second quarter of economic activity underway that provides the perception of an earnings trough in the first quarter.

We???ll know by mid-April whether the rosier manufacturing numbers are genuine when forward corporate guidance accompanies first-quarter earnings or whether these data points are simply playing an April Fool???s joke on investors looking to lean into economically sensitive sectors of the equity market. There is definitely a growing penchant to pivot away from safety and into growth as evinced by the rebound in many S&P 500 industrial stocks, while at the same time there is little if any give-back in the ultra defensive utility, telecom and consumer staples sectors.

Both camps can be right at the same time for a while and everyone gains. The beauty of earnings season is that come this time next month, we???ll know for certain which camp is right.

In case you missed it, I encourage you to read my e-letter column from last week about the markets??? response to Fed interest rate chatter. I also invite you to comment in the space provided below my Eagle Daily Investor commentary.