Connect with us
The USDA is ruining all our fun traditions.

This past week saw some not-so-reassuring events unfold within the bond market. For a brief moment, the U.S. 10-year Treasury Note traded with a yield of only 1.57%, a level not seen since late 2012. A confluence of large unknowns enveloped investor sentiment that was punctuated when WTI crude took out the recent lows and plumbed the low $26/bbl markĀ before Wall Street Journal OPEC correspondent Sumner Said tweeted, ā??OPEC is ready to cooperate on a cut, but current prices are already forcing non-OPEC producers to at least cap output, says UAE Energy ministerā?¯.

At that very moment, buy programs and short covering took the Dow from a decline of 411 points to minus 145 points before settling off 255 points. It was just what a wounded market needed, at least temporarily. Oil prices rallied 8% in early trade on Friday, taking WTI crude back up toward $28/bbl. Equities in Europe and the U.S. found a reprieve in the form of guarded buying. However, markets have been at this crossroad before, trading up on a hopeful headline only to be suckered in by just another false rally attempt when the story doesnā??t pan out. 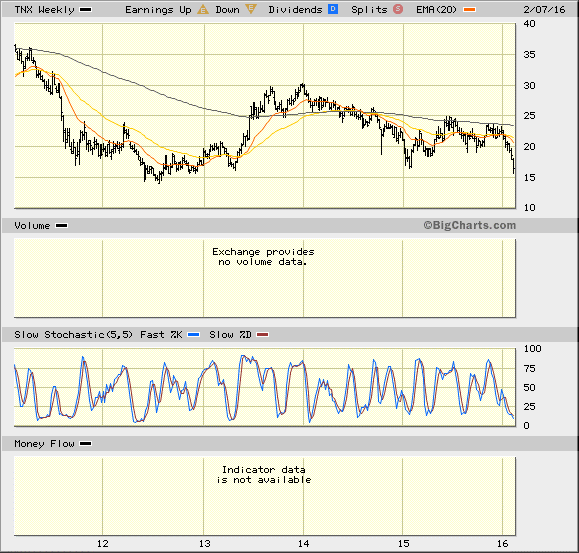 From the five-year chart of the 10-year T-Note above, the dramatic fall from when the benchmark bond was trading with a 3.0% yield at the end of 2014 to where it trades today is a stunning development. It shows clearly that the move by the Bank of Japan to adopt a negative interest rate policy on Jan. 29 set off alarm bells. Investors have been willing to give the European Central Bank, Bank of Japan and the People’s Bank of China the benefit of the doubt as they have all promoted quantitative easing policiesĀ to address slow growth, as well as emerging market and commodity exposure. That trust and credibility is now being called into question , along with the collective effectiveness of their actions.

Fed Chair Janet Yellenā??s testimonyĀ on Capitol Hill this past week was also a true demonstration of leading from behind. Despite the elevated risks of a global downturn, the Fed expects the domestic economy to keep chugging along and that the Fed is still thinking of raising its benchmark interest rate again as soon as March. The bond market is betting the Fed will not move before 2017. While Yellen was delivering a relatively upbeat assessment to the Senate Banking Committee, investors were dumping stocks and ploughing money into Treasuries and gold.

Yellen went on to state that she and her colleagues at the Fed were surprised by the strength in the dollar after the decision to raise short-term rates in December. Really? If every major central bank outside the United States is manipulating the devaluation of their currencies, flooding the market with liquidity, and the largest central bank in the world is raising interest rates, then how could this groupĀ of so-called elite bankers get this scenario so wrong? This is like the Queen Mary backing up in your backyard totally unnoticed and ignored.

In her first day of testimony to the House Financial Services Committee, Yellen said the Fed did not intend to cut rates back to zero and played down the possibility that the Fed would seek to provide new stimulus by imposing negative interest rates. On her second day at the Senate, with the Dow in the midst of 700-point sell off, she was slightly less dismissive, saying the Fed was reviewing that option. She capped off her “out of touch with reality” commentary by reiterating the Fedā??s position that it was necessary to raise interest rates to maintain control of inflation as job growth continued.

Newsflash! The Bureau of Labor Statistics’ recently published U-6 Rate for January —Ā whichĀ includes total unemployed, plus all persons marginally attached to the labor force, plus total employed part-time for economic reasons, as a percent of the civilian labor force — stood at 9.9%. The countryā??s labor force participation rate — which measures the share of Americans at least 16 years old who are either employed or actively looking for work — dipped last month to a 38-year low, checking in at an underwhelming 62.6%. 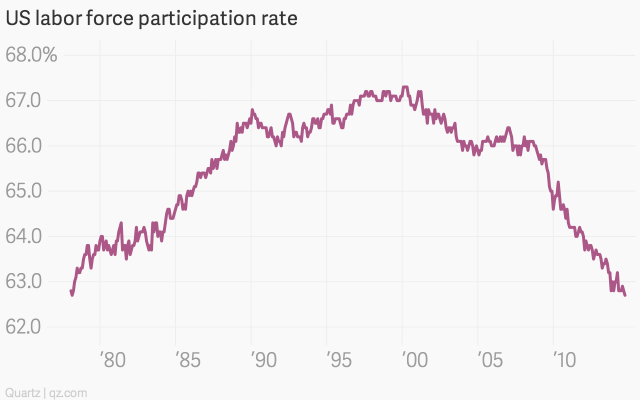 And yet the Fed chairĀ is concerned about controlling wage inflation? The only reason there was a blip on the hourly earnings component of the January jobs data (0.5% vs 0.3%) is because it is a reflection of the implementation of the mandatory increase in the minimum wage, not because economic growth is promoting wage increases due to a shortage of workers. So while the Fed and the Obama administration paint a rosy picture of the economic outlook, the bond market has voted thumbs down.

The U.S. bond market is among the biggest financial markets in the world, with $39.5 trillion outstanding at mid-2015, the Securities Industry and Financial Markets Association (SIFMA) reported. This is equivalent to 1.5x U.S. stock markets and nearly twice the aggregate of the five largest foreign stock exchanges according to SIFMA. When the U.S. bond market makes a dramatic move as we have just seen, there is a big-time message that underscores such a sudden drop in yields. That message is the Fed is behind the curve and negative-interest-rate policyĀ in developed economies raises a yellow caution flag about the size and scope of unforeseen risk that investors fear will surfaceĀ in the weeks and months ahead.

Weā??re only six weeks into 2016 and it feels like six months in a bear cave. Rotation into blue-chip equities with strong history and dividend growth is the most formidable strategy to garner two times what the 10-year T-Note is yielding while leaving room open for capital appreciation. And with the bond market voting hands down that the Fed will wait it out on future interest rates, the dollar has come way off its recent highs, retreating almost 9% from the pre-FOMC meeting December high. This pullback is a bullish development for U.S. multinational companies whose profit margins have been negatively impacted by the strong greenback ever since the Fed ended quantitative easing back in October 2014. 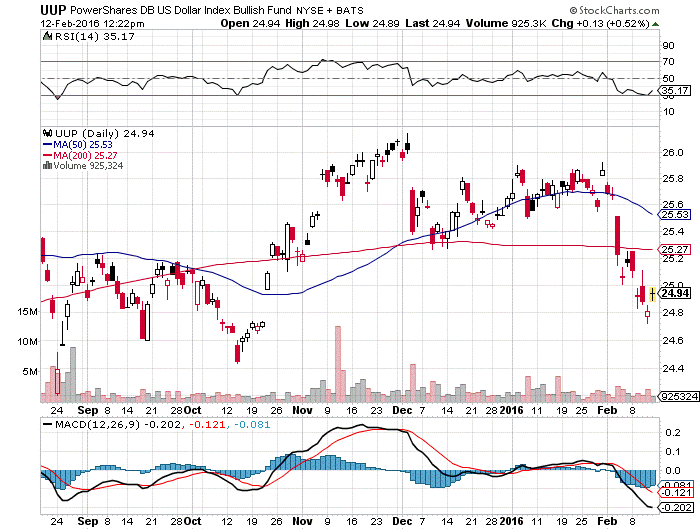 Riders On the Storm

That said, with foreign economies retrenching, investors seeking to add blue-chip multinational exposure to portfolios should focus on stocks within the consumer staples sector. They are resistant to recessionary pressures and market downturns, while providing products that are essential to everyday life and offering dividend yields of 3.0% or more. Top names that fit this profile include Johnson & Johnson (JNJ) and Procter & Gamble (PG). Both companies reported fourth-quarter results that exceeded Wall Street estimates at a time when the dollar was still trading at the high end of the range.

With the dollar in retreat, to what level and how long for is anyoneā??s guess, first-quarter 2016 earnings may well offer investors a nice upside surprise and get paid well along the way. In addition, when global growth eventually does reaccelerate, no promises here, playing the rebound via American multinationals is a safest way to participate. Let the deep benches of these global companies represent your interest in foreign developed and emerging markets. Theyā??ve got it way more figured out than you and I could ever wish to.

Attend The MoneyShow in Orlando, March 2-5!

Receive free admission to the MoneyShow in Orlando, Florida, as a guest of Eagle Financial Publications and me. The showā??s new venue is at Disneyā??s Contemporary Resort near the companyā??s famous theme parks. I especially encourage you to attend myĀ presentation, as well as those of my colleagues Mark Skousen and Nicholas Vardy, among more than 150 other speakers who will address a range of income and growth investments.Ā Resister today atĀ orlandomoneyshow.com.

In case you missed it, I encourage you to read my e-letter column from last weekĀ about the global race to zero interest rates.Ā I also invite you to comment in the space provided below myĀ Eagle Daily InvestorĀ commentary.

Invest in Gold to Profit amidst Bear Market