In 1999, I met Newt Gingrich, the most influential Speaker of the House in the 20th century, for the first time. At the invitation of friends in Palm Beach, Florida, my wife and I spent a weekend with Newt and several other political leaders, including Rush Limbaugh and former Vice President Dan Quayle.

Newt was absolutely giddy about one thing: With new budget surpluses rising spectacularly in the late 1990s, it was conceivable that the national debt would be retired and eliminated completely within 10 years.

He turned to me as a financial economist and asked, ā??Should we take advantage of these unprecedented surpluses to cut taxes or to spend the money on new programs?ā?¯

My choice was to cut taxes, but it was all moot. Newt resigned after Republican leadership lost faith in his abilities (even though he was the most effective Speaker in decades). Within a few years, following the 9/11 terrorist attacks, the federal government was back to running irresponsible deficits and fighting unwinnable wars in Iraq and Afghanistan. It got even worse after the financial crisis of 2008.

Fast forward 15 years, and I spent last week with Newt at our FreedomFest/Eagle ā??Money & Politicsā?¯ cruise to New England and Canada. Newt spoke four times, followed by a one-on-one interview I conducted on the final day of the seminar at sea. 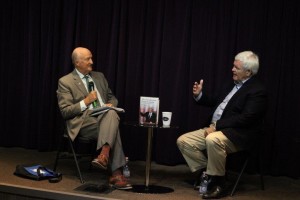 It was a real pleasure for our group to have Newt Gingrich and his wife Callista on the entire seven-day cruise.Ā We also arranged for Newt to comment after the Republican debate on CNN before the entire ship (more than 900 people), and he was well received by many fans.Ā In addition to being the most effective Speaker of the House since World War II, Newt is a professional historian and offered real depth to the current issues of the day. In my one-on-one conversation with him, he said Americans are so fed up with the Washington establishment that you canā??t dismiss the non-politicians Donald Trump, Ben Carson or Carly Fiorina.

I asked him to speak on ā??The Lessons of History,ā?¯ and he emphasized how important it is to know history. Otherwise you are condemned to repeat your mistakes. ā??Knowing history can help solve current problems,ā?¯ he declared.

He gave several examples of the importance of history when it came to winning military conflicts, but his advice pertains to the battlefield of investing, too.Ā For example, Iā??ve been working on Wall Street long enough (more than 40 years) to know that there are times when the economy is weak and the stock market still goes up. How is this possible? Because stock prices are looking forward. If interest rates are low (as they are now) and the outlook for the future is relatively bright, stocks can continue to rally.

Although by nature an optimist, he seemed deeply pessimistic about the Middle East.Ā ā??We are witnessing not just a refugee crisis in that part of the world, but mass migration.Ā More than 100 million people want to move to the United States now,ā?¯ he said.

That advice applies to the stock market, too.Ā Never give up!Ā With interest rates at historic lows and the economy growing, I continue to be bullish and 100% invested. Sell-offs are opportunities to pick up bargains.

New Fourth Edition of ā??Maximsā?? Available at Half Price!

Gettyā??s quotation and 800 others are included in my classic collection, ā??The Maxims of Wall Street.ā?¯ I took some copies with me on the New England cruise last week, and one attendee, John Oā??Brien of Florida, bought a copy and read it onboard.Ā He came up to me and said, ā??Thereā??s more education in this book than with four years of college!ā?¯ 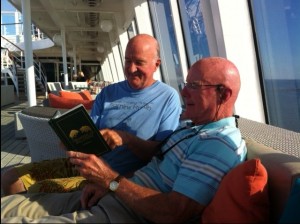 Iā??m happy to announce that we have sold out of the bookā??s third edition, and Iā??ve gone back to press with the new fourth edition. The new edition mentions more than a dozen new quotations and authors. For 30 years, Iā??ve been painstakingly collecting all of the wise old adages, proverbs, humor and legends on Wall Street, based on in-depth interviews with old timers, reading rare financial books and my own experiences of more than 40 years in the financial markets. They include famous lines from Warren Buffett (ā??If you wait to see the Robin sing, Spring may be overā?¯)ā?¦ J. P. Morgan (ā??Troubled waters make for good fishingā?¯)ā?¦ Richard Russell (ā??In a bear market, the winner is he who loses the leastā?¯)ā?¦ and Steve Forbes (ā??Everybody is a long-term investor until the market goes downā?¯).

I divide the book into various categories: beating the market, diversification vs. concentration, value vs. growth, bulls vs. bears, black swan eventsā?¦ doomsayers and Cassandrasā?¦ hot tips and inside informationā?¦ chartists vs. fundamentalistsā?¦ taxes and tax havensā?¦ inspiring ā??pearls of wisdomā?¯ and even a few short stories.

The book has been endorsed by Warren Buffett, Jack Bogle, Dennis Gartman, Alex Green, Richard Band and Bert Dohmen. ā??Maximsā?¯ is nearly 300 pages long. The retail price on Amazon is $24.95, but my subscribers pay only $20 for the first copy, and all additional copies are only $10 each. All are personally autographed and mailed to you for free (I pay the postage). For all foreign orders outside the United States, add $10 per book.

Iā??m offering this ā??half-offā?¯ deal because I know ā??Maximsā?¯ makes a great gift for friends, relatives, business colleagues, investors, your favorite stockbroker and money manager. Many people order a whole box (32 copies). The price of a box of books is only $300 postpaid. As Hetty Green, the first female millionaire, said, ā??When I see something cheap, I buy a lot of it!ā?¯ To order your copies at this super discount, call Ensign Publishing toll-free atĀ 1-866-254-2057Ā or go toĀ www.miracleofamerica.com/maxims.

Nailed It! Yogi Berra Was My Kind of Baseball Hero

Yogi Berra diedĀ on Tuesday at the age of 90.Ā I grew up watching Berra and the other great Yankees in the 1950s, and I became a fan even before moving to New York. 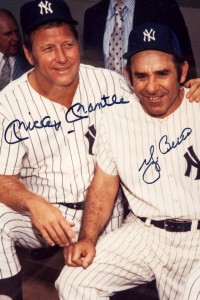 Mickey Mantle was the darling of the Yankees in the 1950s and 1960s and got most of the headlines. But Berra was in many ways a more consistent player and a better person.Ā Mantle hit more home runs and had a higher batting average, but Berra played a tougher position (catcher), won the Most Valuable Player Award three times and garnered 10 World Series rings, a record that is likely to never be broken.Ā Given that Berra was only 5ā?? 7ā?¯ tall, his record is even more remarkable.

Off the playing field, Yogi Berra was the perfect gentleman.Ā He and his wife were happily married for more than 50 years before her death in 2014, and together they had three boys and 11 grandchildren.Ā He didnā??t use foul language or get engaged in drunken brawls like some of the other Yankees.Ā He was a man without guile.

Berra also was famous for his Yogi-isms.Ā Two that might apply to the financial markets were, ā??It ainā??t over until itā??s over,ā?¯ referring to bull markets that can last longer than expected.Ā And ā??Nobody goes there anymore; itā??s too crowded.ā?¯Ā He was referring to a popular restaurant, but it could also apply to ā??crowded trades.ā?¯Ā As Yahoo Financeā??s Michael Santoli states, ā??It really has a lot of wisdom in there because essentially what he was saying is if some place becomes too popular, the people who have options — the people who are smart and try to be looking for the next thing — they don’t go there anymore.Ā The smart money is looking elsewhere.ā?¯

Iā??ll have to add these sayings to the next edition of ā??The Maxims of Wall Street.ā?¯

In case you missed it, I encourage you to read my e-letter column from last weekĀ aboutĀ America’s crumbling infrastructure.Ā I also invite you to comment in the space provided below myĀ Eagle Daily InvestorĀ commentary.

Join me for the ā??granddaddy of all investment conferences.ā?¯ Other speakers include Charles Krauthammer, Mark Steyn, Jim Rickards, Marc Faber, Dennis Gartman and Robert Prechter, among many others. Register now to save. Call toll-free 1-800-648-8411, or go toĀ https://jeffersoncompanies.com/landing/skousen.Ā Be sure to mention you are my subscriber.