OnĀ July 11Ā in Las Vegas, I met up withĀ Donald Trump, the front-runner in the Republican presidential race.Ā He spoke at my big show, FreedomFest, before 2,500 attendees — a record turnout.Ā For both of us, it was our lucky day (7-11 in Vegas!).Ā For me, Trump’s appearance filled the Celebrity Ballroom at Planet Hollywood and drewĀ major media coverage (CNN, Fox, MSNBC, Daily Mail, even Playboy magazine).Ā For him, it was the beginning of his surge in the polls.Ā Now heā??s the front-runner, and some polls have him beating Hillary Clinton for the White House.

Here I am meeting Trump at Planet Hollywood, right before he spoke to our audience, with Senator Mike Lee (Utah) looking on. 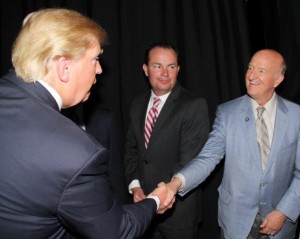 Iā??ve met Trump before and have read several of his books.Ā Ten years ago, he wrote a practical book with lots of advice in business and investing called ā??How to Get Rich.ā?¯Ā Most of the book is devoted to making money in business but he has a few choice chapters on investing wisely.

First, he recommends that you ā??be your own best financial advisor.ā?¯Ā He urges you to watch the financial news and read good financial books and publications, such as the Wall Street Journal and Forbes (I subscribe to both), as well asĀ make your own investment decisions as much as possible.

Second, ā??invest simply.ā?¯Ā He warns you to stay away from Wall Street gurus and hedge fund managers who ā??make you dizzy with talk of intricate financial maneuverings.ā?¯Ā He concludes, ā??fortunes are won and lost every day in these markets, but as far as Iā??m concerned, those folks would be just as successful if they ditched their hedge funds and put all their money on their favorite roulette number at the Trump Taj Mahal Casino in Atlantic City.ā?¯

A smarter alternative would be to invest simply ā??only in products you understand, with people you know you can trust.ā?¯

Finally, third, ā??stay with the winners.ā?¯Ā Avoid hot stocks and money managers who have no track record.Ā ā??Beware of instant stars in the world of finance.ā?¯ 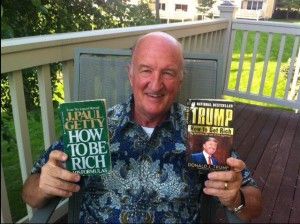 Your editor holds copies of two favorite books in his library.Ā

In fact, in Trumpā??s latest financial statement, he proved to follow his own advice. His portfolio of $78 million consists of mutual funds, traditional stocks such as Apple, Bristol-Myers Squibb and Kinder Morgan and a small amount in gold. He made a 20% return in an 18-month period, not bad. However, he does hold more than $15 million in hedge funds.

Iā??ve been in the world of finance for over 40 years, and Iā??ve been writing my own investment newsletter since 1980.Ā My formula for success is to invest in good quality companies that make money every year, pay above average dividends and have rising dividend policies. I call them SWANs — ā??sleep well at nightā?¯ stocks.Ā For specific recommendations, go toĀ www.markskousen.com.

You Blew It! Nevada Chamber of Commerce Supports Largest Tax Increase in History

One of the biggest tragedies of late is taking place in Nevada. A state known for its low taxes and budget discipline has just gone off the deep end with the largest tax increase in history under a Republican governor and legislature.

InCorp Services has been a member of the Las Vegas Metro Chamber since 2002. In 2014, you awarded InCorp with your Business Excellence Award in recognition of our company culture. InCorp has remained loyal to your organization because we believed you were fighting to protect small businesses like ours from the predatory efforts of the tax-and-spend special interests in Nevada, however the Chamberā??s ā??performanceā?¯ during this past legislative session was outrageous! Not only did you fail to oppose the largest new tax on businesses in the state’s history, but you actually lobbied and testified in favor of this monstrosity using the membership dues we supported you with.

To make matters worse, the tax plan put forth by the governor, supported by you, and eventually signed into law was identical to the margin tax proposal that we all worked so diligently to defeat on the ballot last year. It is a slap in the face to now be hit with this tax after the voters rejected it 4 to 1!

For the last seven years or so our company has struggled in our efforts to bring companies to Nevada not because we donā??t have an ā??educated workforceā?¯, but because the economic development boards in other states advertised loudly to companies considering Nevada that there were powerful interests here pushing for a gross receipts tax. When Question 3 was defeated four to one, this rumor was finally put to rest and a strong message was sent to businesses considering Nevada that there was no appetite for such a tax here. After the defeat we saw instant momentum with companies wishing to relocate or expand in Nevada. We signed a lease for greatly expanded office space at Hughes Center to accommodate the new employees required to accommodate the needs of these businesses. Now, instead of expanding to 150 employees in Nevada, our company which has been repeatedly recognized as one of the ā??best places to workā?¯ is downsizing to no more than 15 employees.

At first I thought it was admirable that the Chamber had hired the Tax Foundation to perform an objective analysis and show all the problems associated with Sandovalā??s tax proposal. But I find it repulsive that Chamber officials would become so eager to fire the Tax Foundation and distance themselves from any criticism of the tax just because the governor didn’t like it. I believed it was the Chamber’s job to fight against punitive business taxes and not to cower and bend over before elected officialsā?¦ I was apparently wrong.

In light of this embarrassment, our company can no longer support your organization. Please consider this letter our official resignation and remove us from your membership rolls, from your website membership listing, and when citing your membership numbers which you already exaggerated by almost 50% when testifying before the legislature, do not include our business in your totals.

In case you missed it, I encourage you to read my e-letter column from last weekĀ about my prediction about the Chinese market.Ā I also invite you to comment in the space provided below myĀ Eagle Daily InvestorĀ commentary.

Join me for the ā??granddaddy of all investment conferences.ā?¯ Other speakers include Charles Krauthammer, Mark Steyn, Jim Rickards, Marc Faber, Dennis Gartman and Robert Prechter, among many others. Register now to save. Call toll-free 1-800-648-8411, or go to www.neworleansconference.com. Be sure to mention you are my subscriber.

In Praise of Monarchy

Refugees: Another One for the “Not Our Problem” File