Can We Still Make Big Profits in the Stock Market? Yes, We Can!

???Asset prices for stocks and bonds are high. The golden age of investing is over.???
— Robert Shiller, author, ???Irrational Exuberance??? (2015 edition)

I was pleased to receive an enthusiastic response from subscribers at the recent Orlando MoneyShow. Many people expressed appreciation for our steady gains over the years with my Forecasts & Strategies investment newsletter.

I emphasized our ???peace of mind??? strategy of recommending good quality companies that pay high and rising dividends. As University of Pennsylvania Wharton School Finance Professor Jeremy Siegel says, ???Dividends are the critical factor giving the edge to most winning stocks in the long run.???

Our high-income investment strategy has worked for years, at least since the early 1990s. During this time, interest rates have gradually fallen — giving us an edge on Wall Street.

But can it last? It all depends on the direction of interest rates. Rates can go no lower, although negative interest rates are popping up in some European bonds (many institutions are required to buy European bonds, no matter what the price). Meanwhile, the stock market has had a great run since early 2009, more than doubling in value. Can it continue?

My friend Robert Shiller, Yale professor and Nobel laureate, argues that stocks are now overvalued, based on his famous CAPE measure, and that we are witnessing the end of the golden age of investing. CAPE stands for cyclically-adjusted price-earnings for S&P 500 over the past ten years. See chart below. 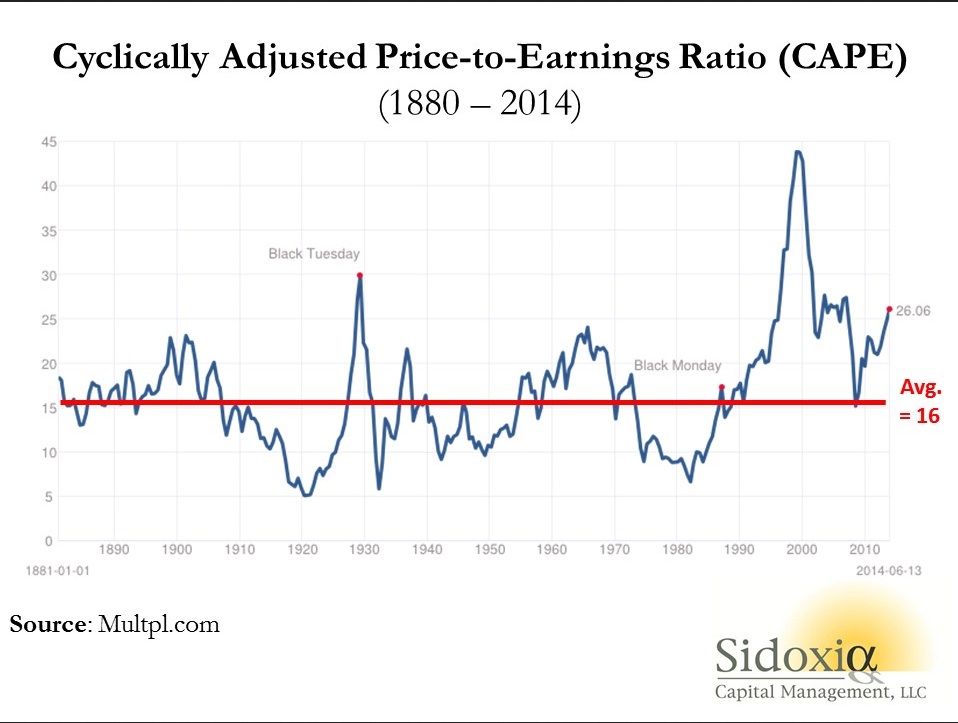 As the chart indicates, stocks are now entering an overvalued period, above 25. Those mark the times when the markets crashed in 1929, 2000 and 2008. However, as Wharton???s Jeremy Siegel points out, the last 10 years include the 2008-09 financial crisis, which involved huge write-offs by large corporations, suggesting that CAPE may be artificially high.

Whether that???s true or not, one thing is certain: Shiller???s CAPE is not especially good for forecasting when the market will top out. For example, the last two times that CAPE crossed 25 (in 1996 and 2003), the bull market was just getting started and ran for another four years!

For now, I believe we are still in the middle of an ideal environment for high-income investing. The Fed is not likely to raise rates until consumer prices steadily rise higher. With gasoline prices down, that???s not likely to happen for another year.

You Blew It! More Saving Will Ruin the Economy?

Last week, in promoting a new edition of “Irrational Exuberance,” Robert Shiller, a Nobel Prize-winning economist from Yale University, said he is encouraging his students to save more, because the ???golden age of investing??? is over and investors will need to save more to have enough for retirement.

Then, in an interview with Yahoo Finance, he nodded his head with approval when the interviewer said that saving more ???would ruin the economy.??? Shiller added, ???If everybody saved more, then we???d have a problem.??? The interviewer went on to say, “Shiller is referring to the idea that if everyone saved more, they wouldn???t be spending money on discretionary items and the U.S. economy is heavily dependent on consumer spending.???

Of course, this so-called ???paradox of thrift??? is nonsense and might only apply during periods of Great Depression when savings were stashed away as cash under a mattress or stayed idle in a bank account.

There is actually no empirical evidence of a paradox of thrift. In fact, just the opposite is true. A St. Louis Fed study of a few years ago concluded that higher savings results in higher economic growth.

It also is not true that consumer spending dominates the U.S. economy.

My own work demonstrates that business spending (my B2B index) is almost twice the size of consumer spending in the United States, based on the new Gross Output statistics that the Bureau of Economic Analysis (BEA) now is using.

Read my lead op-ed in the Wall Street Journal on this subject.

In short, saving more is a good idea, for individuals and for society.

I want to invite you on a cruise, Sept. 13-20, with Newt Gingrich, Chris Versace and me, among others. Come spend seven fabulous days aboard the six-star luxury liner, the Crystal Symphony. We will travel from New York to Montreal with a roster of noted historical scholars, political pundits and renowned market experts who will share their insights and perspectives on the current environment in Washington and Wall Street. For further information, including how to sign up, call 800-435-4534 or visit www.PoliticsAndYourPortfolio.com.

O Top Ten Debates Announced at This Year???s FreedomFest, July 8-11, Planet Hollywood, Las Vegas: We have a great lineup of debates this year, starting with the Krugman-Moore debate. We also have: Peter Thiel vs John Mackey on ???Monopoly Power! Has Competition Been Oversold??????? Michael Shermer (Scientific American) vs Congressman Allen West on ???Are We in Moral Progress or Decline??????? Ian Morris (Stanford University) vs Angela Keaton (Antiwar.com) on ???War, What is it Good For??????? Michael Huemer (University of Colorado — Boulder) vs Mark Skousen (Chapman University) on ???Is Government Really Necessary??????? Dinesh D???Souza (???What???s So Great about God???) vs the late great Christopher Hitchens (???God is not Great,??? whose views we will try sharing via ???séance???) on ???Does the Afterlife Exist??????? Colin Campbell (???Whole: Rethinking the Science of Nutrition???) vs Wayne Gorsek (CEO, DrVita) on ???Are Vitamins Good for You??????? Gregory Clark (University of California — Berkeley) vs Alexander Green (Oxford Club) on ???Is the American Dream Dead??????? Richard Crepeau (University of Central Florida) vs Marc Eliot (Hollywood???s #1 biographer) on ???The New National Pastime: Football or Film??????? Yaron Brook (Ayn Rand Institute) vs Ziad Abdelnour (Blackhawk Partners) on ???Israeli-Arab Peace Accord in Oil, Gold and Stocks!?????? plus ???The Fed on Trial??? with prosecuting attorney Robert Murphy (Mises Institute) vs defending attorney Jeff Madrick (???The Case for Big Government???), with Steve Forbes and John Allison (Cato Institute) as star witnesses and our Judge Kennedy (Fox Business). Only at FreedomFest — visit www.freedomfest.com, or call toll-free 1-855-850-FREE.