I attended the American Economic Association (AEA) meetings in Boston during the past weekend, and the session on possible Ō??secular stagnationŌ?Ø in the United States was standing-room only. Prominent economists, including Larry Summers, former Secretary of the Treasury and president of Harvard University, pointed to several negative trends in America: lower productivity, decline in new businesses, high household debt, slowing population and a persistent decrease of the economic growth rate.

I also spent some time with Nobel Prize economist Robert Shiller (Yale University), who predicted both the dot-com bust in 2000 and the real estate collapse in 2007/08, and he remains pessimistic about stocks and real estate. 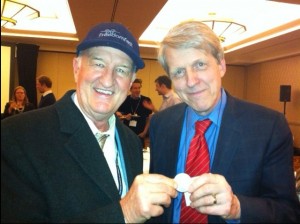 These pessimistic worries aren’t entirely unfounded. But as one economic historian pointed out, the same fears were expressed by Alvin Hansen at the 1938 AEA meetings, just before these trends reversed themselves and we enjoyed a new burst of economic success.

Never count America out! I found it ironic that this debate was taking place in Boston, the center of the biotech revolution that is booming right now with new drugs and initial public offerings (IPOs) coming out.

Special Note: For those who were away during the holidays, we have extended the Ō??early birdŌ?Ø discount to FreedomFest until Jan. 15, but that is the final deadline. You wonŌ??t want to miss this yearŌ??s show and debates. Register at www.freedomfest.com, or call 1-855-850-FREE.

The other session I attended in Boston was a debate with Thomas Piketty, the French author of the bestseller Ō??Capital in the 21st Century.Ō?Ø I think his book should be called Ō??Anti-Capital.Ō?Ø His position is that┬Āincome inequality┬Āis getting so bad that it will destroy Ō??democratic capitalism.Ō?Ø His solution┬Āis to impose┬Āsharply higher progressive taxes on both income and wealth. Such taxes, however, are┬Āthe worst kind of tax. First, his proposition is┬Āa tax on capital, the engine of economic growth. Transferring money from the productive private sector to the unproductive public sector is a recipe for disaster.

Another risk is that once you adopt progressive taxation, there is no limit to how high the tax rate could go on the worldŌ??s most productive citizens. Even Lanny Ebenstein, a biographer of Hayek and Friedman, has been seduced into thinking progressive taxation up to 99% on the super wealthy is a good idea!

The problem is that once you agree on a progressive tax, you can never legitimately determine the ideal level of progressivity. You donŌ??t want a situation where everyone earned the same amount of income, because that would destroy the economy. (How can you pay someone to work for you when you earn the same amount for not working?) And at the opposite extreme, someone controls all the money, leaving everyone else in the dust. Neither extreme is ideal. But what is the ideal balance? ItŌ??s impossible to say.

The best book ever written on the progressive tax is “The Uneasy Case for Progressive Taxation,Ō?Ø by Walter Blum. 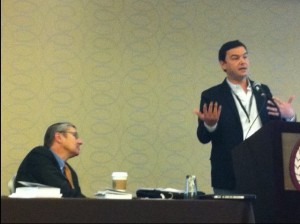 At the session, I raised the argument that inequality depends on how you measure it. Yes, income and wealth inequality may have increased, but if you look at goods and services, inequality has probably decreased in a lot of ways — after all,┬Āalmost all Americans, including the poor, have decent cars, smartphones and HD TVs. I have debunked his arguments in this review.

A New YearŌ??s Resolution:
How to Do Good and Help Improve the Image of the Wealthy

The latest BarronŌ??s has a column by Gene Epstein on my Ō??Social Security Pledge.Ō?Ø Several years ago, I suggested that wealthy retirees who donŌ??t need to live on Social Security should donate their Social Security checks to their favorite charity through automatic withdrawals from their bank account. Gene donates his $3,000 a month check to the┬ĀReason Foundation. You can read this column here.

Divorce can bring out the worst in people —┬Ābitterness, greed and regret in the case of the 26-year marriage between Harold Hamm, the chief executive of oil driller Continental Resources, and his former wife. She just refused a check for $974.8 million. She is trying to get more out of an estate that is dwindling by the day.

The lawyers said Sue Ann Arnall did not want to accept the check for fear of hurting her appeal for even more money. Hamm had borrowed funds to ensure there would be enough cash in his account to cover it. But no matter, she seems hellbent on getting all of the Hamm fortune, or whatŌ??s left of it, which largely was made from the fracking revolution.

Arnall, a former Continental executive who was married to Hamm for 26 years, contends that her award of around $1 billion in cash and assets was inadequate and allowed Hamm to keep the lion’s share of a fortune her lawyers valued as high as $18 billion (much less now). Hamm already had paid his former wife more than $20 million during the divorce proceedings.

Hamm contends his Continental stake, which he owned before meeting Arnall, surged in value during the marriage due to “passive” or market factors, like rising oil prices.

Oklahoma law says only marital wealth stemming from active efforts or skills of either spouse should be split in a divorce.

The appeals risk dragging Hamm and his Oklahoma City-based oil company deeper into a divorce battle that is already in its third year. The fight has already consumed┬Ātens of millions of dollars in costs and forced a┬Ā10-week trial that ended in October. Meanwhile, HammŌ??s company has lost substantial┬Āmarket valuation during the past month.

Join me for the World MoneyShow in Orlando, Florida, Feb. 5-7 at the Gaylord Palm Resort & Convention Center. To register for free admission to the investment conference, call 1-800-970-4355 and mention you are my subscriber. Use┬Āpriority code 037575.