Derek Jeter, Steve Forbes and Me: Gaining an Unforgettable Lesson

At the invitation of Steve Forbes, I was able to attend Derek Jeter???s last game as a player at Yankee Stadium. Mr. Forbes has season tickets and occasionally invites me to join him. Tickets for the game were selling for $850 and more, and those were bleacher seats, so I felt lucky. The Yankees were ahead 5-2 in the 9th inning when I told Mr. Forbes that I expected the Orioles to score three runs and tie the score, forcing Jeter to bat one more time to win it all in his final time at bat at Yankee Stadium. My prediction came true. Mr. Forbes can verify it. What a night! 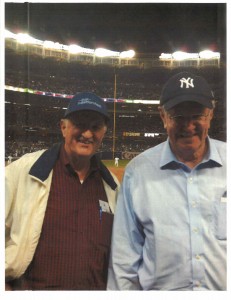 Steve Forbes and Mark Skousen at Yankee Stadium, with Derek Jeter in the background

I can relate to Derek Jeter. He never won the Most Valuable Player award, but he was a steady, reliable performer during his 20 years with the Yankees and ended up getting five World Series rings. By the same token, I view my 35 years of writing Forecasts & Strategies as achieving steady performance, while never personally ranking #1 in any one year. But over the long run, I have delivered a winning formula for financial success.