France 24 reported, via Religion of Peace:

The Turk who shot pope John Paul II in St Peter’s Square in 1981 claimed in a new book on Friday that the founder of the Iranian revolution, the late Ayatollah Ruhollah Khomeini, told him to do it.

The Vatican immediately denied several assertions in the book including the claim by Mehmet Ali Agca that he had spoken of the Iranian link at his meeting with John Paul II in his prison cell.

Ali Agca, a former far-right extremist and Islamic fundamentalist, said he was “indoctrinated” in Tehran after escaping from a Turkish prison where he was serving time for killing a journalist.

At a nighttime meeting with Khomeini, Ali Agca said the Supreme Guide of the Iranian revolution told him to kill the Polish pope — who was badly wounded but survived the assassination attempt.

Turkish supporters cheered Agca when he was released from prison. 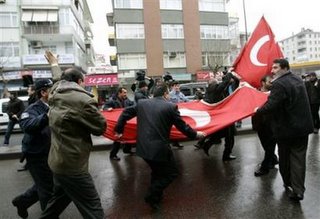 Supporters of Mehmet Ali Agca follow his car with a Turkish flag after the Turkish gunman who shot Pope John Paul II in 1981 left a military recruitment center after being released from prison in Istanbul, Turkey, Thursday, Nov. 12, 2006. Agca was serving more than 25 years behind bars in Italy and Turkey for the plot against the pontiff and the slaying of a Turkish journalist. (AP Photo/Anja Niedringhaus)