Team Obama "Starting to Worry" About Low Turnout for Inauguration

Team Obama is starting to seriously worry about low turnout for the 2012 Inauguration.
Two weeks before the big day, plenty of hotel rooms still haven’t been booked. Two million turned out for the 2008 Inauguration.

Crowds may have flocked to the National Mall to see President Obama make history in 2009, but the team behind the president’s 2013 inauguration bash later this month are bracing themselves for a ton of empty seats.

The ceremony that Washington will stage in a few weeks won’t be the historic affair it was in 2009, when nearly 2 million people flocked to the Capitol o watch Obama take the oath of office.

This time, District of Columbia officials expect between 600,000 and 800,000 people for Obama’s public swearing-in on the steps of the Capitol on Monday, January 21.

Two weeks before the big day, plenty of hotel rooms still haven’t been booked. Four years ago, some hotels sold out months in advance.

There will be just two official inaugural balls this year, both at the Washington Convention Center, rather than 10 official balls at multiple locations around town.

The pair of celebrations are the lowest number since 1953, according to the New York Post.

A political insider told the paper: ‘Some on the presidential inaugural committee are starting to seriously worry.’

His inaugural committee has also scaled the celebration back to three days of festivities, instead of four.

The poor Obama voters can’t afford the trip this year.

But on the bright side…
Maybe they won’t have to worry about the trash problem they faced after the 2008 Inauguration. 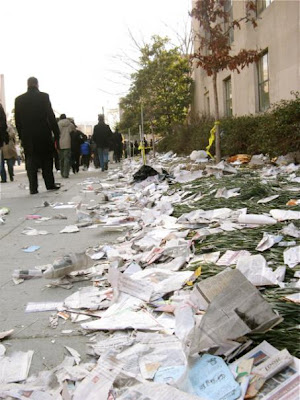 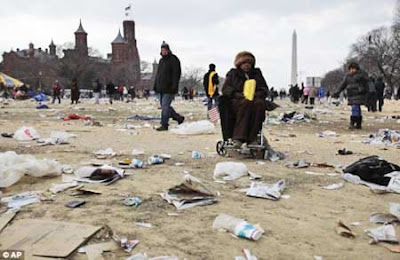 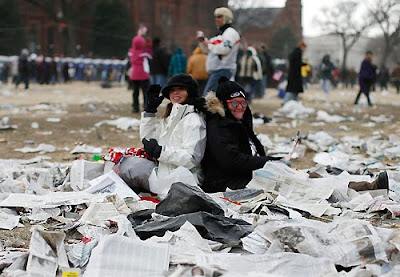 Nojay against 'feel-good' gun laws that help nobody