Connect with us
Just how bad a blunder was President Obama's forced gay marriage endorsement?

Since the election of President Barack Obama and the drubbing Republicans took on November 6, 2012 a growing number of Americans have been advocating for state nullification of ObamaCare . Many more have taken the next step and have gone as far as floating secession from the union.

Many of the nullification ideas have been pushed for years by the Tenth Amendment Center and Thomas Woods, the author of Nullification: How to resist Federal Tyranny in the 21st Century. They would argue that nullification stands on solid legal and historical footing and that the growth of the federal government will never be stopped without it.

In a recent article called ???No More Waiting. Nullify Now!??? the Tenth Amendment Center founder Michael Boldin said, ???Instead of moving on to nullification, you decided to wait again.  You were going to hold out and see how the Supreme Court ruled on Obamacare before working on nullification.  And, as usual, the supremes failed the constitution and your liberty.???

Boldin then claimed that the election of Republican or Democratic presidents doesn???t really matter, and he said, ???Instead of getting suckered on this garbage even one more time, one more day, or one more minute, how about pledging right now to take that action you???ve been afraid to take for so long. Nullification.???

On top of the ramped up push for nullification are the hundreds of thousands of people, from all 50 states, that have signed petitions on the White House website asking to secede from the union.

A secession leader in Texas, Daniel Miller, said to Politico.com ???This is not a reaction to a person but to policy and what we see as a federal government that is so disconnected from its constituents and absolute no regard for what its purpose was.???

Although there is a great temptation for conservatives, in light of the most recent election, to attempt to nullify federal laws and even abandon the union, it must be noted that those actions are unproductive, unconstitutional, have led to the destruction of two national political parties and one bloody civil war. There are far better options on the table, and more legal ways for citizens to resist the power of the federal government, ones that will not easily feed into negative media narratives about the conservative movement.

The inspiration for ???nullification??? of federal laws by state governments comes mostly from the Virginia and Kentucky Resolutions authored in 1798 by James Madison and Thomas Jefferson respectively. The resolutions were written in response to the Alien and Sedition Acts passed by the Federalist dominated Congress and President John Adams in order to crackdown on the widespread criticism of the ???Quasi War??? with France. The resolutions, while fueling a political movement that brought Thomas Jefferson and his followers to power, was outright rejected by ten states, unmentioned by four others and met with suspicion in Virginia of all places.

Contrary to popular belief, the threat of nullification and the more extreme measure of secession have been used by a diverse set of individuals and political movements, not just pro-slavery advocates, but abolitionists too. However, this fact does not make those actions any more sound, successful or constitutional.

The first major secession movement was in the northern, New England states. A number of Federalist Party leaders, angry at President Madison and the Jeffersonian Republican Party???s policies during the War of 1812, met in Hartford, Connecticut to discuss the introduction of Constitutional amendments and possible secession if they didn???t pass. The so-called ???Hartford Convention??? ended in disaster as the war was brought to a relatively successful conclusion shortly thereafter. The Federalists appeared unpatriotic and nearly treasonous; they never again nominated a serious presidential contender and the party faded nationally.

The doctrine of nullification reached its high point in 1832, when South Carolina residents, angry at the economically oppressive ???Tariff of Abominations??? passed in the final days of the John Quincy Adams presidential administration, threatened to nullify the law and resist federal attempts to enforce it.

Democratic South Carolina governor, James Hamilton, was so infuriated and unhinged while a federal customs official was trying to confiscate a an illegal shipment of sugar he ordered from Cuba that he said to a crowd of South Carolinians, ???If Uncle Sam puts his robber hands on the boxes, I know, my fellow citizens, you???ll go to death with me for that sugar!???

Hamilton was ever after known as ???Sugar Jimmy,??? popular in South Carolina, a punch line everywhere else.

William Cullen Bryant of the New York Evening Post, a free-trader who deeply hated protective tariffs, nevertheless wrote a brutal editorial on nullification, saying, ???Every man of common sense must know that if a single stave is withdrawn from the barrel, it inevitably tumbles to pieces, and whatever be the dimensions of the stave withdrawn, the catastrophe is equally sure and fatal.???

Vice President John C. Calhoun came out for state nullification in his famous ???Fort Hill Address,??? arguing that the states should return to a state of sovereignty and that they needed a ???veto??? to check the power of the federal government.

Calhoun, attempting to channel Madison???s Virginia Resolution, said, ???The right of interposition, thus solemnly asserted by the state of Virginia, be it called what it may???state right, veto, nullification, or by any other name???I conceive to be the fundamental principle of our system.???

Ultimately, Calhoun believed his plan was both constitutional and would save the union. James Madison, often labeled the ???Father of the Constitution,??? disagreed.

Madison said at the height of the nullification conflict, ???But it follows, from no view of the subject, that a nullification of a law of the U. S. can as is now contended, belong rightfully to a single State, as one of the parties to the Constitution; the State not ceasing to avow its adherence to the Constitution. A plainer contradiction in terms, or a more fatal inlet to anarchy, cannot be imagined.???

Madison continued his attack on nullification by describing its effect on the states and the union,

In some [states], the tariff on imports would be collected; in others, openly resisted. In some, lighthouses would be established; in others denounced. In some States there might be war with a foreign power; in others, peace and commerce. Finally, the appellate authority of the Supreme Court of the U. S. would give effect to the Federal laws in some States, whilst in others they would be rendered nullities by the State Judiciaries. In a word, the nullifying claims if reduced to practice, instead of being the conservative principle of the Constitution, would necessarily, and it may be said obviously, be a deadly poison.

Madison, in an attempt to speak for Jefferson, who had died several years before the conflict, said that nullification of law, and ultimately secession, could only occur with a violation of natural rights. Essentially the same strict set of principles violated that would necessitate a revolution.

Even though many supporters of nullification say that that the doctrine doesn???t lead to secession, a great number make that jump. Some members of the Tenth Amendment Center are starting to entertain the idea. Such open appeals to secession should never be appealed to trivially or simply to make a ???statement.??? Even the most fervent Confederates on the eve of the Civil War were gravely serious and only appealed to it when they were willing to take up arms.

John C. Breckinridge, former vice president of the United States, coming off a loss in the presidential election of 1860, described the risk he was taking by turning against the union and his state of Kentucky, ???Anonymous writers and wandering orators have chosen to tell the people that I am a disunionist and a traitor to my country, and they declare that the atrocious form in which I have exhibited that treason, makes, by comparison with it. [Aaron]Burr a patriot, and the memory of [Benedict] Arnold respectable.???

Breckinridge was convinced that there was no way to save the Union and no way to preserve his principles while in it; therefore he was willing to risk his life, reputation and pick up a rifle to fight for his cause. Can modern day secessionists say the same?

Though secession and nullification are a step too far, conservatives should not just sit by meekly while bad laws get implemented. There are ways of resisting federal power effectively and constitutionally at the state level.

One way that states are resisting ObamaCare is through the Health Care Freedom Act, which has already been passed in many states. The law states that no government entity can force an individual to participate in the healthcare system or stop an individual from purchasing treatment. Governors can also refuse to set up health care exchanges in their states. States are not obligated to set up health exchanges for the federal government, and if enough Republican governors, who control 30 states, take that action, it will put a major roadblock in the implementation of ObamaCare.

If my arguments aren???t convincing enough that nullification and secession are dangerous to the conservative movement and the country, then I will leave you with an excerpt from the end of Sen. Daniel Webster???s debate with Sen. Robert Hayne at the height of the nullification crisis,

When my eyes shall be turned to behold for the last time the sun in heaven, may I not see him shine on the broken and dishonored fragments of a once glorious Union; on States dissevered, discordant, belligerent; on a land rent with civil feuds, or drenched, it may be, in fraternal blood???No such miserable interrogatory as “What is all this worth?” Nor those other words of delusion and folly, “Liberty first and Union afterwards;??? but everywhere, spread all over in characters of living light, blazing on all it sample folds, as they float over the sea and over the land, and in every wind under the whole heavens, that other sentiment, dear to every true American heart – Liberty and Union, now and forever, one and inseperable! 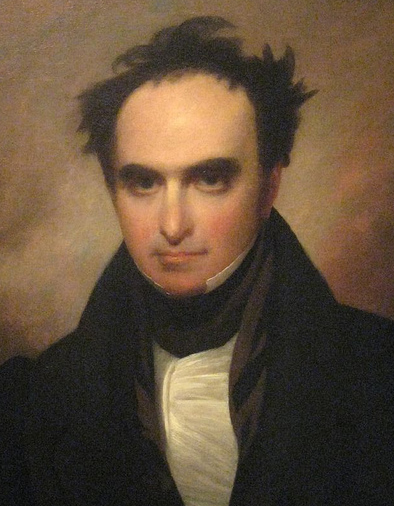 Bader Up: A new leader at CEI